I like the fact Ducati has designed a standard exhaust for the Sixty2 Scrambler that looks good straight off the bat.

In fact Ducati has over 50 accessories to make the Sixty2 your own, so it’s being marketed as a highly customisable bike.

Unlike a lot of others, the exhaust is one thing which doesn’t need replacing before the bike turns a wheel.

If I owned the bike and felt compelled to change it, I’d go all out and put the high-swept Race Line accessory exhaust on.

For me, living near the coast this bike screams out to get the surf-style treatment. 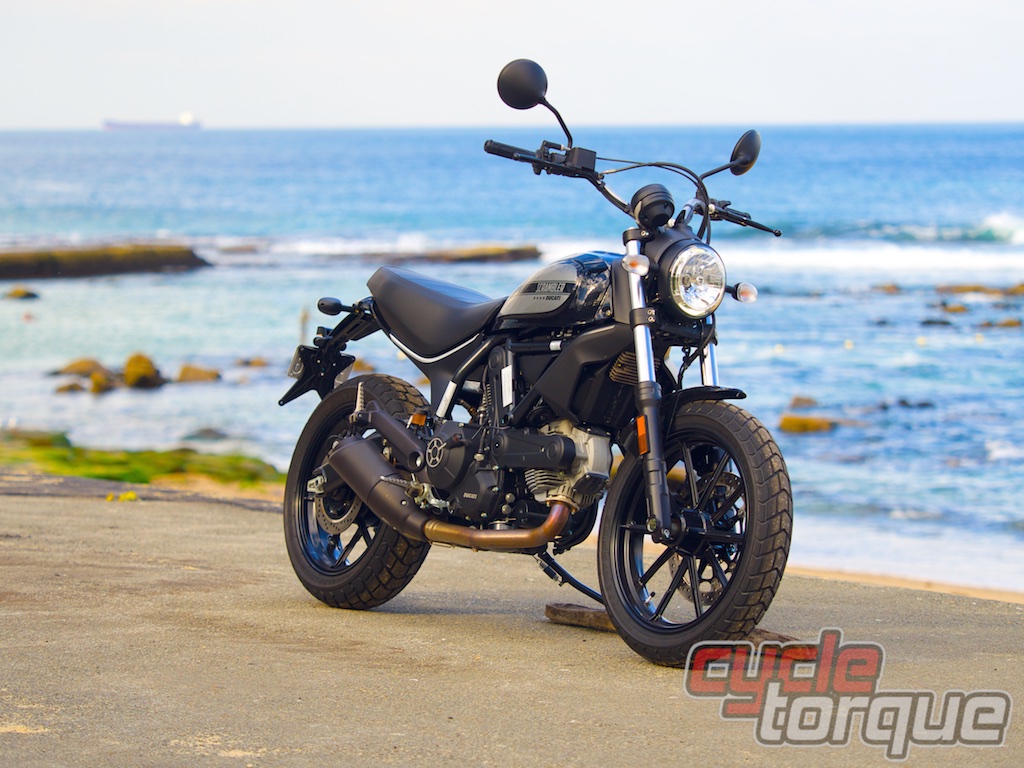 Putting on a set of waterproof side bags or a rear bag for the wetsuit/boardies and towel, plus I’d either look at a set of spoked rims for extra style, with a set of road-focussed tyres.

People say the rack would make the bike unsafe, but living on the coast you see countless scooter-riding surfers living the dream, so I’m sure where there’s a will, there’s a way.

That would make the Scrambler Sixty2 the ultimate lifestyle-bike in my opinion.

This is what the Scrambler Sixty2 is all about, and a huge reason for buying one – you can make it ‘yours’.

Is it too cool?

You name it, Scrambler has its name all over it.

It is all undeniably cool, but it should only be worn sparingly or it might end up having adverse affects, like some very passionate brand lovers – you know who they are.

We took the Sixty2 down to the beach for a photo shoot and it was surprising how often people were stopping us to talk about the bike.

A few were familiar with it because they were riders, but the majority weren’t riders at all.

The Scrambler is a bike which peaked their interest in motorcycling.

Yes, this bike creates a certain type of teen spirit.

It might make Kurt Cobain roll in his grave, but that doesn’t take anything away from Ducati, who has identified something people want to feel a part of.

From the perspective of Cycle Torque’s audience as a motorcycle magazine review, Ducati’s Scrambler Sixty2 is a peach of a motorcycle in the under 400cc market – it’s easy to handle, begs to be customised, looks great and provides reliable performance. But is it for you?

Who is it for?

As a package, it is so much fun to ride. But the jury is still out on whether Ducati’s Sixty2 Scrambler will attract the wallets of people who have been traditionally labelled as ‘real’ motorcyclists – learners or otherwise – and whoever they may be, it isn’t being squarely aimed at them.

In that school of thought, the Sixty2 is a bit too expensive at $11,990 plus on-roads considering there are other bikes which provide just as much fun with similar levels of performance, available for roughly half the money.

But they aren’t Scramblers.

The Scrambler buyer wants one because they want one and nothing else will do.

It’s marketed as a bike for those who aspire to ride not because it dominates their way of life, it compliments it.

Little will they know how quickly the passion can take hold.

Modern-looking motorcycles do not and cannot provide the same attraction.

Bikes are seen by these others as an appliance used to get through the daily grind.

The Sixty2 is a great escape for those who want to feel like they are living for today more than tomorrow – surfing, skating, whatevering their way up and down the coast to the next music festival or other boat-floating activity (and perhaps working from time to time, too).

The big question is would you rather create those memories and filterless photos in a Wicked Camper around OZ or on a Contiki tour abroad?

Or, would you rather spend similar money doing it on something like this?

I pick the Scrambler hands down!