While Gidley’s life pretty much revolves around leading the Newcastle Knights on the field and spending time with his family, there’s the odd occasion where he can get away from it all on his customised Harley–Davidson. We caught up with Kurt at the recent Sydney Motorcycle Expo where he and former NRL and Parramatta star Nathan Hindmarsh were guests of Harley-Davidson, getting the story on where it all started for Kurt and motorcycles. 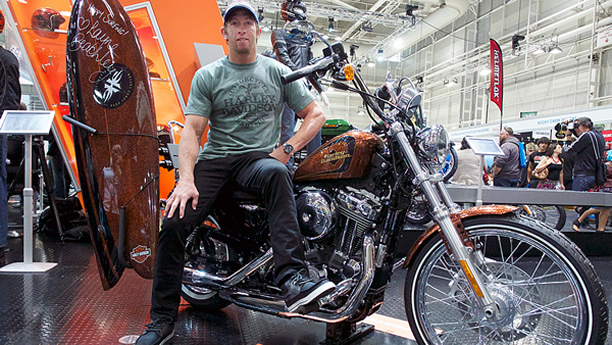 “My mum and dad weren’t too keen on me having a dirt bike when I was a kid due to the safety thing, but I started work when I was 16, and then at 17 I bought my own dirt bike. “I’ve always loved motorcycles and motorsport, especially dirt bikes. I had a dirt bike for a few years and came off breaking my arm. When I was starting to get serious about footy I sold the bike to concentrate on my Rugby League career.

“When I was about 22 or 23 I wanted to get a bike again, a road bike. I got my licence and got back into bikes. I really enjoyed riding and it was good to be on the bike by myself.” 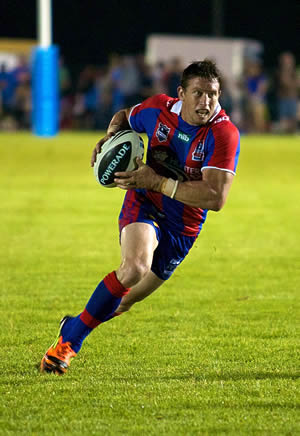 It all just went from there. “I like the style of Harley-Davidson bikes and I found this one not far from where I live. It’s a Softail Deluxe with lots of extra chrome and accessories. The guy I bought it off did lots of work to it and it’s a real nice bike. I don’t get on it as much as I’d like and I’ve got a young family so between footy and family there’s not much time left.”
And while it’s fun there’s also a serious side to Kurt’s motorcycle riding.

“I’m involved with the Old Boars Motorcycle Club, which raises money for Protate Cancer and when I can I like to get involved with fund raising with the club.

What about his footy? “I’ll be recovering from an ankle operation at the start of 2014 so I won’t be competing in the Auckland Nines. I hope to be back for the start of the regular NRL season but I we’ll have to see how I go. “I’m very proud of how Newcastle went in 2013 and I think we can keep that momentum going into 2014.”