BMW has announced the R 90 S concept bike, a design created in conjunction with Roland Sands Design in the USA. The Concept Ninety was built in part to celebrate the 90th Anniversary of BMW Motorrad’s two wheeled history, and also because the original R 90 S turns 40 this year.

When it was released in 1973, the R 90 S was one of the fastest production bikes of its day, reaching a top speed of just over 200 kmh.
It was also one of the first motorcycles to feature a front fairing as standard.

“The BMW R 90 S hails from an era in which bikers were regarded as outlaws,” comments Edgar Heinrich, Head of BMW Motorrad Design. “There was something rebellious about it – it was fast, loud and wild. Pure emotion. And it has retained its fascination to this day.”

The Concept Ninety is a collaboration between BMW and Roland Sands Design.
Roland Sands himself explained that the design brief from BMW was to build a modern interpretation of the original R 90 S. “BMW came with their initial sketches, we talked and gave our ideas and they continued to work through sketches and finally came up with something we all really liked. It was collaborative from start to finish which was really a great way to do it,” he said. 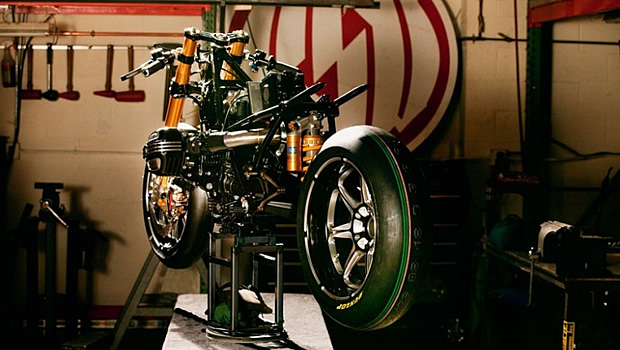 “The aim of the BMW Concept Ninety is to show how reduced and pure an emotional BMW motorcycle can be,” explains Ola Stenegard, Head of BMW Motorrad Vehicle Design. Its basic proportions are clearly geared towards the original: the faring, fuel tank and rear section instantly reveal the bike’s kinship with the BMW R 90 S.

The BMW Concept Ninety also echoes the separation of the motorcycle’s proportions which was typical at the time: the trim is visually distinct from the black engine and chassis sections. While halogen reflected the technological state of the art in the original machine, cutting-edge LED lighting elements give the BMW Concept Ninety its face today.

And who is Roland Sands? He is a former AMA 250cc GP Champion (1998) who traded his leathers for a hammer and a pencil to start designing motorcycles. He describes his designs as a mixture of sportbike and chopper influences. The result in this case – the rebirth of the BMW R 90 S.

The interesting thing is you would expect the HP4 to be even sharper and harder edged than the ‘cooking’ S 1000 RR, but BMW has not only made it a better track bike, it’s made it a better road bike too. […]

It might share an indicator or two with another BMW model, but that’s about it: the new R 1200 GS is an all-new bike: engine, chassis, the lot, built with the heritage of BMW and the GS-range in particular, but a new machine. […]