DESPITE being built from anodised aluminium, the Replay XD1080 is still a tiny action camera, if not the smallest and lightest on the market it must be close.

It’s shape, too, is awesome for many applications, being a narrow cylinder which, if out in the breeze on a helmet, doesn’t create much drag. It’s also weatherproof out of the box with double O-ring seals and replaceable lens cover. The images produced by the Replay are a little different from most action cams, too: it’s not as wide-angle (135 degrees rather 170), which means you don’t get the ‘fish-eye’ effect nearly as much, and other bikes in the shot are larger in the picture.

When this works, it’s awesome – you don’t need to ride in such close quarters to your mates to get a good shot – but it makes set-up more crucial and vibration a bigger problem, for any imperfections are magnified by the narrower field of view. I found the Replay works best on a helmet, either using the stick-on mounts or the Goggle strap. The camera has some neat alignment tools to ensure it’s horizontal and pointing in the right direction, but it’s best if you get a mate to check the alignment, and have a look in a mirror to ensure the horizontal line is set right.

Operation is simple. The Replay XD vibrates three times when powered up (using the front button), does the same when recording is started (back button) and once respectively when pausing recording or switching off. Settings are controlled under the rear cap, which is also where the microSD card is loaded and accessories plugged in.
Here you can set 1080 or 720p, 30/60fps… and of you don’t know what those things mean just leave it on the default settings and the video will look just fine.

Like most action camera, I was disappointed in the audio. The onboard microphone catches the wind badly, but using the supplied stick-on covers (designed to alleviate the problem) reduces the volume too much. Better to use an accessory microphone, but you’ll need an optional adaptor which screws into the back of the unit. However it has been pointed out to us that mic gain can be increased in the advanced file settings. 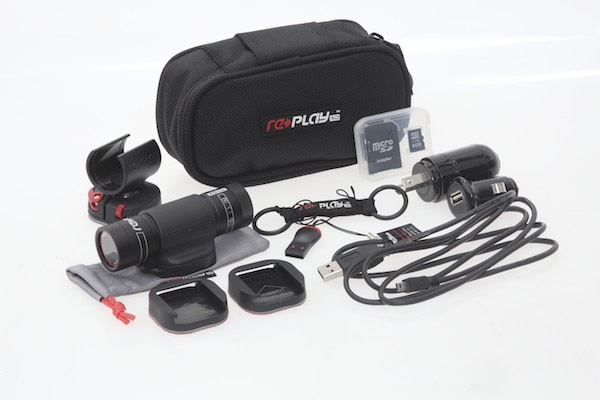 Also available and very handy is the long-life battery – the Replay XD has a non-removable internal battery which is good for a couple of hours – for longer rides tuck the battery into a pocket and route the cable up to the back of the camera. The battery cable also has a plug for a standard microphone, which could also be left in a pocket, or maybe inside you helmet for your own personal running commentary (I haven’t tried this yet, but hope to soon).

For the more geeky out there, you can easily modify some of the internal settings via a file on the microSD card: custom file naming, auto start/stop, power down delay and more. The Replay XD1080 survived my week in Cambodia without any problems, and I barely noticed it’s presence on the side of my helmet. I did lose one of the rubber button covers, but I think that was as it was being scraped along a tree…

The Replay XD1080 is really the basis of an Action Camera System – replay has built a real infrastructure of mounts and accessories which can really extend what you’ll get out of the cameras if you put the time and effort in to capture great images.
Out of the box the replay works well – adding accessories can lift it to being not just good, but great.
As we went to press we discovered that the new Deep Dive Case, for depths to 60m, should be available by the time you read this!

The Ventura Rally-Euro Bike-pack was fitted to the Cycle Torque Yamaha FZ6-R project bike in about half an hour and it’s getting daily use. […]

I WAS a little shocked to discover the Forma Adventure boots we have are now over five years old, still in good nick and still great to wear for Adventure riding. […]

With a Rebel Yell…

Australia’s first Kevlar-lined jeans manufacturer is making and a huge range of riding jeans for the world market these days and are always coming up with new design and styles to suit the market and improve the product. The Rebel Jean is one of those new models, featuring super-soft stretch denim in light blue with fashionable scuff marks. […]