Kawasaki’s Johnathan Rea is one round away from World Superbike Championship history, by being the first rider to win three championships on the trot. 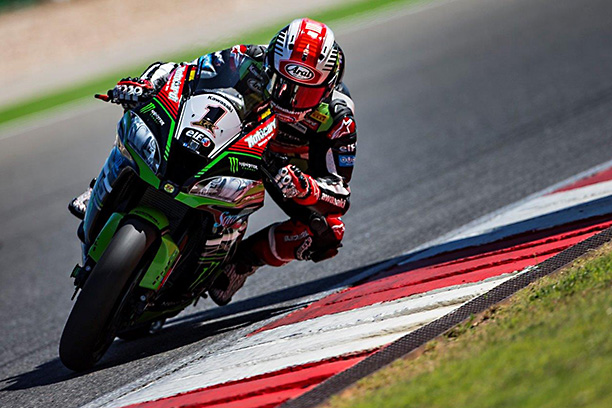 Rea won both races in Portimão, Portugal, and leads the championship by 120 points to Kawasaki teammate Tom Sykes.

Sykes had a nasty off in FP3 at Turn 9, resulting in a displaced fracture of the little finger of his left hand, which appeared to get caught in the front wheel.

There was also plenty of flames.

Sykes’ injury meant he was not able to compete all weekend.

The championship will head to Magny-Cours for the Pirelli French Round in two weeks’ time, over the 29th September to 1st October weekend.

Race 2:   Rea victor, ahead of Van der Mark and Melandri

Championship contender Chaz Davies (Aruba.it Racing – Ducati) crashed out with three laps to go, which was another significant victory for Rea as he edges closer to a third successive WorldSBK title.

Van der Mark was delighted with his first podium with Yamaha after the Dutchman beat Melandri to the finish line by 3.367s. Just off the podium was Eugene Laverty (Milwaukee Aprilia), whilst Jordi Torres (Althea BMW Racing Team) also featured in the top five.

VDM will now ride the Factory Yamaha M1, replacing an injured Valentino Rossi for the MotoGP round at Aragón, Spain.

Fores picked his machine up to finish 13th.

Rea utterly dominated the field in the opening race of the weekend, starting from pole position, and when the lights went out he didn’t look back.

Crossing the line on the opening lap with already a second lead, the 30 year old was able to take his ZX-10RR to new levels as he whitewashed the field over 20 laps at Portimao, with the Ducati pairing of Chaz Davies and Marco Melandri taking second and third.

It was Rea’s fourth win in a row in Portugal, and even the defending world champion was surprised at his pace today.

“These weekends don’t come so often, the circuit is really difficult to get a perfect set up. I worked on myself and not just the bike over the weekend, but everything has worked well.

“I got a good start, put my head down from lap one and when I saw the gap on the first lap from my pit board I couldn’t believe it.

“Then it was hard to keep the concentration for the rest of the race, but it was very rewarding and if the gap stayed consistent I knew I had a bit to respond with.

“I’ve never had this kind of race in my life, so it’s amazing. The bike feels so nice, I am lost for words.”

Reigning WorldSSP Champion Kenan Sofuoglu (Kawasaki Puccetti Racing) was in fine form as he notched up win number five of the season.

Pole man Sofuoglu dropped back to fourth in the early stages with PJ Jacobsen (MV Agusta Reparto Corse) and Mahias contesting the lead and Cluzel also getting in the mix.

Mahias put some pressure on Sofuoglu on the last lap as the Frenchman sought to retain the lead in the general standings, but the Kawasaki rider was too strong as he showed his class for a narrow – but crucial – triumph.

The WorldSSP riders return to action at the Pirelli French Round in two weeks.

Tyco Suzuki’s Josh Brookes crashed-out of British Superbike race two today at Cadwell Park a couple of corners from home – and an almost-certain debut victory at the Mountain Circuit. […]