PIAGGIO’S X10 500 Executive is the new flagship of its range, offering an incredible combination of comfort, technology, safety and fun in a large-capacity scooter.

While many motorcyclists in Australia scoff at scooters, the X10 is aimed at riders – those who appreciate the luggage capacity, weather protection and city-friendly nature of a scooter, but still want freeway-capable performance. 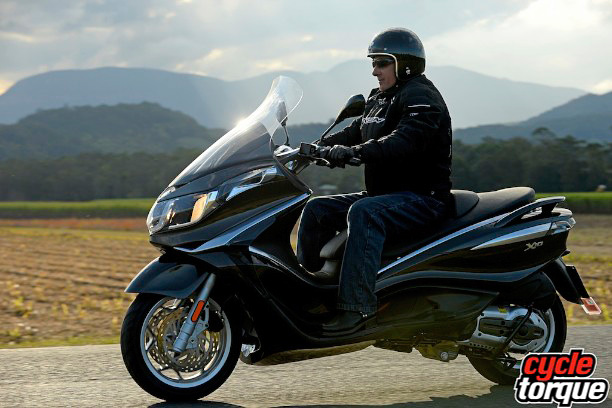 If you own a race replica sportsbike, custom cruiser or big touring bike, an X10 in the shed might become your day-to-day ride, allowing you to keep the other bike for its intended use.

The new machine replaces the MP3 500 and XEvo400 in the Piaggio range.

Engine and chassis
The X10 is powered by the 493cc twin spark Master engine, so it’s a four-stroke liquid-cooled four-valve engine with EFI and electric start. The twist and go CVT transmission system is as smooth and as easy as they come. 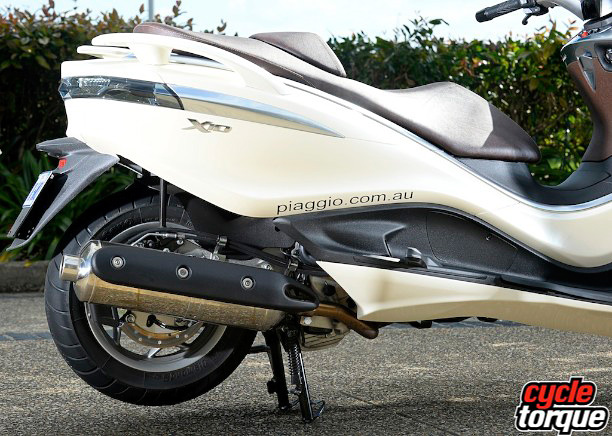 Rear suspension is a horizontally mounted mono-shock with electrically operated hydraulic preload which is virtually infinitely variable – you can adjust it on the move via two little buttons near the ignition. Front end duties are handled by telescopic tubes with 41mm of travel.

The frame is a closed double cradle of steel tubes.

Electronics and running gear
And as the flagship it has all the good gear that you’d expect this premium marque to carry – linked brakes, ABS and ASR traction control, electrically adjusted rear pre-load, engine immobiliser, a sidestand with an integrated park-brake and all the other little things that make life easier, like the shopping bag hook, large central glove compartment, the 12volt socket and the USB port. 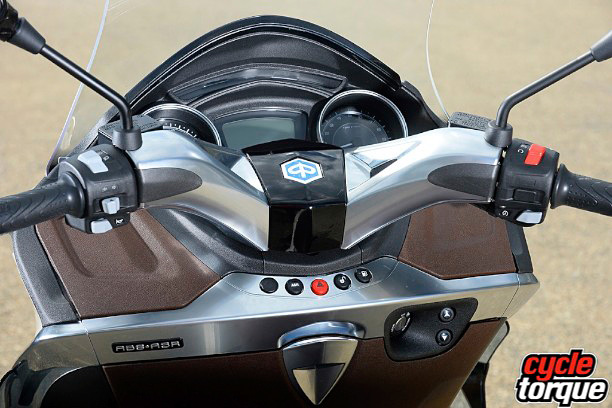 Bluetooth connectivity makes the X10 compatible with Piaggio’s new PMP (Piaggio Multimedia Platform) system – just a simple matter of downloading the Piaggio App to your Android or Apple smartphone, stick it in the dash mounted bracket and you can get enough data and information to keep you occupied for months at a time.

There’s even an associated GPS kit and that can even tell you where the nearest servo is if you’re running low on fuel or even if you’ve forgotten where you’ve parked your machine – fair dinkum, these things are more like spaceships than motorcycles! 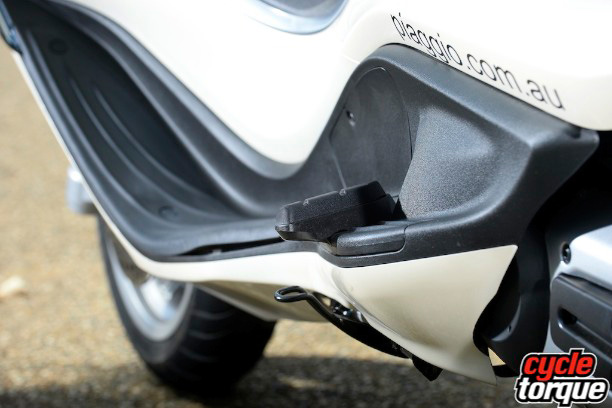 The X10 is shod with Sava MC28 Diamond S tyres with a 15inch rim up front and a 13inch rim at the rear. The 1640mm wheelbase is pretty long for a scooter and that adds to its stability, as the X10 is a very sure-footed machine, even when it’s cranking along at a good pace.

The brakes are more than well catered for with twin-caliper twin 280mm discs up front and a single 240mm single-caliper disc at the rear. Combined with ABS and the traction control you’re going to have to be trying hard to get yourself into strife.

At the launch in Northern NSW we were let loose on the coastal hinterland covering all kinds of traffic conditions from around town to wide open spaces and some twisty mountain terrain. In city traffic it is an easy machine to manoeuvre, but getting out of town and doing few serious kilometres gives you a taste of this maxi scooter’s potential. 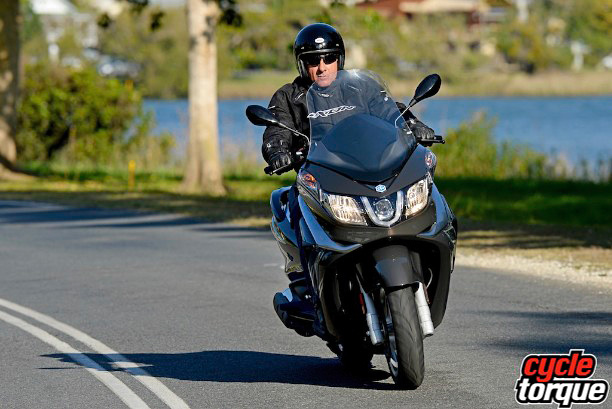 On the road
Plush is a word that springs instantly to mind. The motor and transmission are so smooth you just know this machine is capable of taking you anywhere that there’s bitumen. Even two-up, this scooter will eat the kilometres.

At 760mm the seat height is more than comfortable for the vertically challenged and it weighs in (dry) at 198kg.
A fuel tank capacity of 15.5 litres means there will be plenty of riding time before you need to think about the next fuel stop. 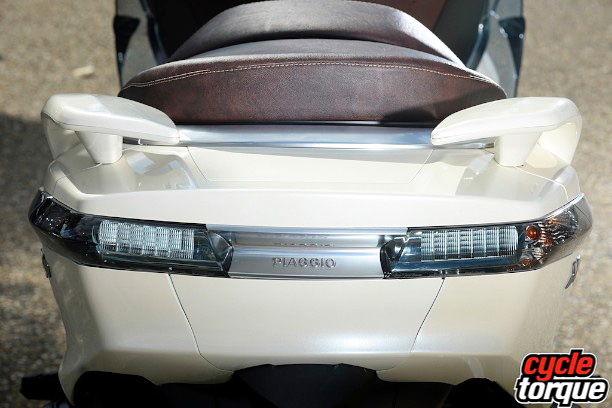 Rear suspension is electronically adjustable on the fly, a wide comfortable seat with adjustable rider lumbar support plus passenger grab rail make it just as capable at touring as commuting.

The screen is a great plus if you have touring tendencies. On that note, the underseat compartment, at 52 litres, fits most combinations of one full face and one open face helmet. But if you really want to push the touring boundaries you could also get the colour matched top box or taller windscreen or various other accessories. 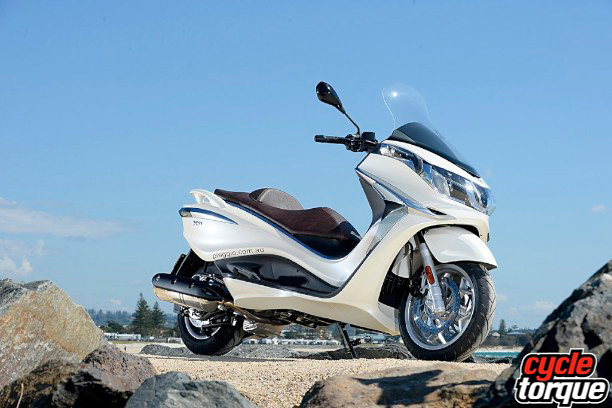 A popular choice
The scooter market may be down slightly on sales this year (by over 13% in the first six months of the year) but Piaggio is rising above the pack with a 1.3% increase this year on top of more than 28% last year. So, with two dozen other brands out there Piaggio has just over 25% of the market – a not insubstantial position to be in. And one that is in no small part due to the quality, reliability and value of the machines that Piaggio produces.

Your well-named Executive comes with two year unlimited kilometre warranty and $11,990 will put your name to one.

Vespa 946 to be available in limited production run

Iconic scooter manufacturer Vespa has announced that the ‘946’, first seen at EICMA in 2011, will be available in Australia for a limited time. […]

If YOU have been looking for a bike to get you over the line and into the world of, well, three wheels in this case, the Tricity could be your answer. […]