Dani Pedrosa
“Today the track conditions were good, the tyres worked well and we improved the bike. All this helped us a lot to increase our pace and this is the most important thing. Qualifying was difficult, because we were behind for a large part of the session, but we managed a great last lap and took pole. Now we have some ideas to improve the bike for tomorrow and hope to have a strong race.”

Jorge Lorenzo
“We still suffer a little bit when the weather is hotter, we don’t have the same grip. Even with this issue we have been competitive though, in the free practice and also in the qualifying. I was surprised to be so fast in the first lap when I made a 47.6. I was also surprised about the lap time from Marquez on his first try and also the lap time from Dani. I thought the 47.2 lap was enough for pole position but Dani was faster so it wasn’t. The important thing is to make a good start tomorrow, to get in front and to go away if possible. If not possible, the race is long and we have to be consistent. We have to improve some small details but in general the bike is better here than at the other tracks.”

Andrea Dovizioso
“The front row for us – at Mugello with the Ducati, that is really important for all of the fans and all of the sponsors. Our target is to fight for the podium but our pace isn’t podium pace at the moment. I hope tomorrow will be colder because our bike will work better. For now, we’re on the front row and it’s good, so we’ll see what happens in the race.”

Monster Yamaha Tech 3’s Cal Crutchlow will start fourth, still riding with a broken leg and despite an early crash in Q2. LCR Honda MotoGP’s Stefan Bradl pipped Repsol Honda’s Marc Marquez for the middle slot on the second row. The rookie had crashed in each of the first three practices – not least on Friday afternoon where he had a miraculous escape from serious injury after locking the front wheel at 337 km/h, running off the track, and then leaping clear at barely undiminished speed before the bike struck a trackside wall.

Marc Marquez
“Sixth place today was the best that we could have hoped for and I am very happy with this result. At the end of qualifying I was able to put in a hot lap, but the race tomorrow is going to be difficult and tough. I won’t be 100 percent physically, because I’m bruised and sore. My shoulder is bothering me the most, and we will see how it responds tomorrow. We are going to give our all, in any case, and see where we end up.”

Lorenzo’s teammate Valentino Rossi – riding with a turtle-inspired helmet design – was disappointed to have plummeted to seventh at the last moment, heading up Row 3 from Ducati’s Nicky Hayden and GO&FUN Honda Gresini’s Alvaro Bautista.

Valentino Rossi
“The practices are not so bad because we have a good pace for the race which is important. As always in the qualifying we suffer more than the others. They use the slipstream of the others and are able to go a bit faster than me. Unfortunately I have to start on the third row but I’m quite happy because my pace is quite good so I think with a good start I can do a good race. We will see tomorrow.”

Pramac Racing’s Andrea Iannone will start his first premier class home Grand Prix from 13th place, although teammate Ben Spies has pulled out of the weekend as he continues to suffer pain with a pectoral muscle. Accompanying Iannone on Row 5 will be Randy de Puniet (14th) and Hector Barbera (15th) for their respective Aspar and Avintia Blusens outfits. Gresini CRT runner Bryan Staring managed 22nd position on his 26thbirthday, one spot ahead of Avintia’s Hiroshi Aoyama who had endured two accidents earlier on in the day.

Bryan Staring
“This is proving to be a difficult weekend for me. I am struggling to get a feel for the track and the crash this morning made things even more difficult. We made some improvements this afternoon but the gap to the guys in front is still too big. Despite everything I am still confident for the race, because I think if we can make a good start and follow some guys who know the track well I can get a better reference.” 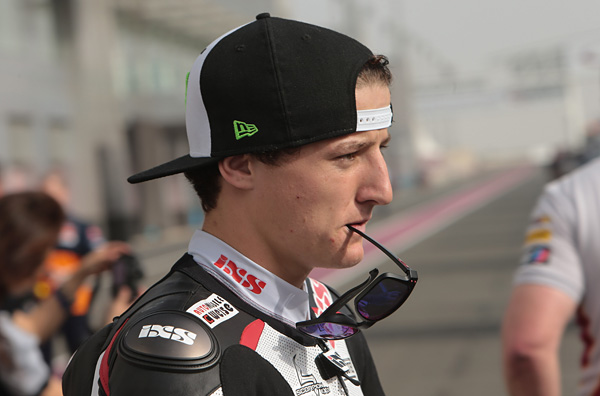 Australian Jack Miller (Caretta Technology – RTG FTR Honda), pictured above, narrowly missed his first front-row start of the season in the closing minutes of Moto3 qualifying, but was happy to end up a close fourth, heading the second row and enjoying the to-and-fro nature of the high-speed circuit, where the sweet handling of his machine meant he could make the most of the smooth Honda horsepower. Miller qualified fourth also at the second round in Austin, Texas, where he finished a season-best sixth.

Australian Jack Miller took line honors in the opening Moto3 World Championship race at the Losail Circuit in Qatar, the first of 18 rounds of the competition. It was the 19-year-old Australian’s first Moto3 win and was a great debut with the Red Bull KTM Ajo Factory team. […]

Carlton Dry Honda Racing is backing the efforts of Emma McFerran for a second consecutive year as the female freestyle motocross sensation sets her sights on the opportunity-laden international scene. […]