Pedrosa’s Pole position gives the former 125 and 250 World Champion the opportunity for a great start in his home race, which he will start as World Championship leader for the first time in his premier-class career. Tomorrow’s race will also be Pedrosa’s 200th Grand Prix event.

Dani Pedrosa: “I am very happy, because we put in a great lap and took a great qualifying time. It was a fantastic pole position for me. We also broke the circuit record and were able to do so in front of the home fans. I am also happy about improving our race pace, as this is the most important thing. We hope to put on a good show tomorrow and take full advantage of the front row start.”

Slotting themselves in on the front row and also looking to get away from the chasing pack tomorrow are Yamaha riders Cal Crutchlow and Jorge Lorenzo, with the pair trailing poleman Pedrosa by 0.608s and 0.673s respectively. Lorenzo overcame an early clutch problem, swapping bikes to make the front row.

Cal Crutchlow: “I think we did a great job today and I am really happy to be back on the front row. It seems a while since I managed it at the first race in Qatar and at least I won’t be starting from fourth again. The conditions were really tricky with the incredibly high track temperature and it looks like it is going to be a big battle in the race tomorrow. I’ll be happy to get a good start and hang with Dani and Jorge because they are obviously going to be strong. Jorge had a few problems today and maybe without those he would have taken second off me. But there’s no doubt we deserve this front row and that’s a good reward for all the hard work done by my Monster Yamaha Tech 3 crew. Congratulations to Dani though because that was an incredible lap time in such tricky conditions.”

Jorge Lorenzo: “I’m very disappointed because today we had a problem with the clutch in a crucial moment and this lap time was the best I could do. I also had not so much confidence on the front to make a perfect lap. We hope for race distance we can remain constant and fight for the win. We will need to be strong and concentrate for the whole race; we don’t know what can happen in the 20th lap.”

From the second row the likes of GO&FUN Honda Gresini’s Alvaro Bautista, Ducati’s Nicky Hayden and Repsol Honda’s Marc Marquez will also be hoping to mount podium challenges, having all qualified within a second of pole.

Alvaro Bautista: “Today we have to be happy because we got really close to the front row of the grid for tomorrow’s race. I immediately felt good with the soft tyres for qualifying and I was able to push with conviction. We made several tests to evaluate the durability of the tyres for the race because this will be the biggest problem for everyone. In qualifying we went back to yesterday’s set-up because the other ideas we tried in practice didn’t give me confidence. Tomorrow will be a very tough race but my starting position is good and so I’ll exploit it to try and stay with the leaders. Tyre management will be crucial for a good result.”

Marc Marquez: “I am fairly happy and satisfied, because we achieved our objective of getting onto either the first or second row. In the morning I felt more comfortable, with the track temperatures lower than in the afternoon. When they rose sharply, we had more problems. Despite this, I think that we have done a good job. We will try to test out a few things in the warm-up tomorrow and see if we can gain a little more confidence when the track is hotter.” 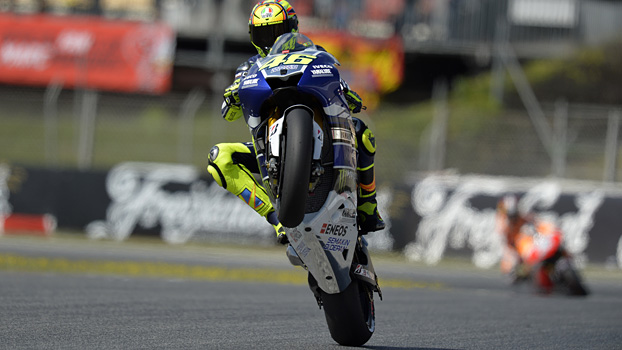 From the third row, Yamaha Factory Racing’s Valentino Rossi (above), Energy T.I. Pramac Racing’s Andrea Iannone and Ducati’s Andrea Dovizioso will all aim to make their final improvements in Warm Up on Sunday morning in order to be able to challenge the leading six on the grid.

The scorching heat at the Circuit de Catalunya – track temperatures reached 52°C during qualifying – is forecast to continue on Sunday meaning that tyre tactics will be as important as ever for the sixth race of the season, with harder options likely to be favoured by the riders.

Pedrosa all set for Le Mans after operation

Repsol Honda Team’s Dani Pedrosa is ready to get back to business at Le Mans this weekend, taking part in the Monster Energy Grand Prix de France following surgery for arm pump. […]

Greg Yager and Pete Marshall have recently completed a 24-hour round trip across the Simpson Desert on Yamaha WR250Rs.Readers can see the elements Yager and Marshall were up against in their video below: “This bike […]