THIS Ducati Monster 1200 came to us configured with a touring kit, consisting of two ‘firm case’ panniers, a multi chamber magnetic tankbag, and a vestigial screen, situated just proud of the instrument panel. Both bags are locked to the bike, are removable, have ‘shower caps’, as does the tank bag, and can be expanded by unzipping the firm lid, allowing greater capacity. During our time together, the bags were in constant use, as the weather was still volatile after the so called, Hunter, ‘super storm’. These Givi sourced items are tailor made for the Monster 1200, and proved weatherproof, and mighty convenient. I love long rides and the ability to cart some gear to support weeks or weekends away is paramount. It also lets me use ‘more’ of the bike, and, I always want more of that! This Monster in touring guise is a ripper!

A naked bike, with eminent performance, brakes and high levels of comfort has been achieved here. So what is the 11′ Testastretta engined Monster like? Depends… Equipped with three modes of operation in conjunction with ABS and DTC, one can select from Urban, Touring or Sport, each has its own level of ‘intervention’, on the one hand, and ‘enhancement’, on the other. The M1200 has a meaty 135hp, in both Touring and Sport modes, and 100hp in Urban mode. The difference in the two 135hp modes is that ‘Sport’ is completely unbridled, instant, and race bike like, whereas ‘Touring’ softens the delivery with a less aggressive more refined throttle response. Sort of an ‘iron fist in a velvet glove’, approach. Clever. I thought, “I’ll never use that ‘other stuff’, leave her in Sport, and simply ride there.”

Subsequently, during heavy downpours and in evening city (wet) traffic, I tried both other options, and must admit, it was a nicer, more controlled ride. Using those technical options, is a real world benefit. Having said that, 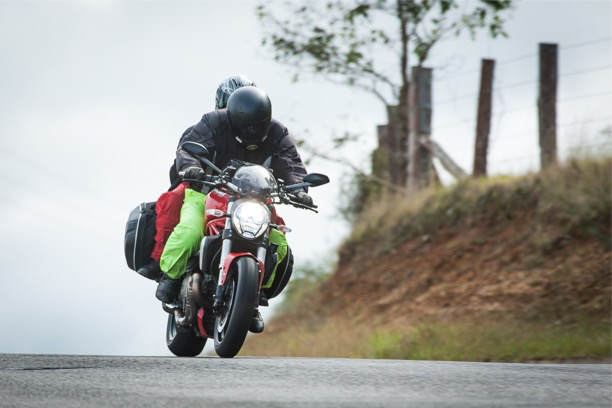 During some drier moments, alone in the hills on day one, I began exploring this engine. Imagine a never ending open right hander, up hill, short shifting to third a little early, and punching past 5, to 6, then to 8000+ rpm. All the while leaning off a little trying instinctively to stay forward on the bike, feeding it gears, as it laughs at you and hurls you into a zone far beyond your projected apex, and keeps going, and going, relentless blinding torque, until, laughing in your helmet and shaking your head in disbelief, you button off, thinking, “there’s more!?” Then on a deserted straight, you have a similar, more profound experience through the gears, seriously believing you ‘must’ be at the limit of your ability to hold on! The torque is SO strong, the response so visceral and instant, I can’t believe this is a proddy bike, with standard road mufflers, pump fuel, and a mere 200k on the clock! Long live Sport mode! The rev’ counter runs to 10,500 rpm, however my excursions were well short of that and momentary out of respect for the engine’s youth….

Always interested in the views of other riders I spoke with a Monster 1200S rider in Bombala; we talked about the std M1200 etc, and his preferences re the choice of riding mode, his view was… “I just leave it in Sport mode mate, it’s irresistible!”. Ross got his Monster in order to return to riding, in celebration of his survival in a life threatening accident, wanting useable fun, after years of stirring his Duke riding mates, he is now a believer (thanks for the yarn Ross).

The brake package is better than me as a rider. The Brembos have feel and bite, squeeze the lever hard and you’ll know what it’s like to do serious push-ups! I never got anywhere near the ABS, but it’s comforting to know it’s there. As they say, “it’s only gotta save you once!” The brakes are easily managed, and have sportsbike levels of performance if you want to ride there. The ‘S’ version has another 10hp, Ohlins, slightly upgraded brakes, and a $4000 increase to acquire, if you just have to have more you won’t be disappointed, far from it. For this li’l black duck the standard bike is so good, I think I’d spend the difference on weekends away and tyres/rego’ etc? Rider’s choice.

The bike comes with premium Pirelli rubber, and, a 190 section rear, quite large, and yet there is no hint of being over-tyred, the wide, beautifully attenuated ‘bars, the light (209kg wet) mass, the excellent riding position, and the comfortable seat, adjustable for height, all add up to confidence, and comfort in all riding conditions.

This baby has poise in both rough dirt, traffic commuting situations and sports riding as well, a versatile synthesis of real world elements across the board. The suspension, was honest and capable, needing zero adjustment in order to optimise performance or rider comfort one or two-up. This is rare, and unexpected. So much more due to the fact we all used the bike with different loads. A 75kilo rider solo, a 100kilo rider solo and a pillion and 100kilo rider and full luggage, combined. No adjustments required, meaning the standard set up, as supplied must be near the perfect compromise.

Our ‘Super Pillion’ commented the seat was comfy, and the ’pegs were in the right spot, despite some care/familiarity being needed when positioning the right foot to the footpeg as the right hand pannier has to accommodate the muffler array. Once familiar, all good. There was room for two despite lots of heavy/bulky wet weather gear. Super Pillion also had some feedback regarding the performance, indicating the beaut’ grab handles were just the ticket, however, provocation in Sport mode, brought squeals and a hand slapped firmly around the rider’s tummy to stay secure! Care needed, if your passenger is enjoying the scenery and you suffer a dose of “Dr Jekyll and Mr Hyde”!

Other user friendly items abound, the sidestand is configured such that the left footpeg folds nicely allowing deployment without going on a fishing expedition to achieve ‘stand down’. The clutch and gearbox might be the smoothest I’ve ever experienced on a Ducati, no notchiness on one so young is a pleasant and welcome surprise.
A lot of refinement has gone into the clutch actuation and gear selection, positive and smooth from a rider perspective. The fly by wire throttle adds to this ease of operation, it is, no doubt, the ‘other side’ to the smooth change coin, and all these elements compliment each other to deliver a wonderful riding experience. Even the standard pipes emit plenty of ‘boom’, this bike does not really need accessory ‘pipes’, however most owners won’t be able to resist Ducati’s optional items.

For $20k + orc you get a lot of quality hardware and ‘bang for buck’. If I were to change anything, I’d be asking Ducati to do a Monster 1200 “Rallye” version, consisting of everything you see here, with the addition of a slightly larger screen, heated grips and hand guards, a small extended flat rack, and perhaps a stripe or two and a “Rallye” badge? Just a thought. If you want a value for money Ducati naked sportsbike, that will eat miles, cart some gear, look after the pillion and have the ability to get VERY serious when it comes to real world (sports) riding. The Monster 1200 is certainly the answer…

I had the pleasure recently of having a quick fang on the latest offering from the Monster stable of Ducati.

First impressions were that I could get both my feet on the ground, which is nice seeing I’m from the vertically challenged clan. It also has a narrow but comfortable seat with an easy reach to the ’bars and a more upright position to my own ride.

Negotiating the hazards of urban traffic on my way to a less populated country road I found the Monster 1200 comfortable and easy to ride, though with the usual big V twin ‘jerkiness’ if you happen to be in too high a gear at low speeds.

Gear changes were smooth and effortless, even though this Ducati only had about 300 kilometres on the clock, I was able to up change smoothly from second gear onwards without using the clutch, something I have a habit of doing, being a bit lazy and all.

Out in open spaces on a familiar piece of track I noticed how stable the big Monster was while cornering, happily going where I pointed it without the need for corrections over bumpy surfaces, it happily railed through the corners with great ease. Bearing in mind I wasn’t pushing hard due to the moisture on the tarmac and the shiny new tyres!

Aunty Mal was keen to get my opinion on the acceleration of the red beast, to see if I was as impressed as he was, seeing as how I’m accustomed to the momentum of my own Japanese sportsbike.
Like a dirt bike on steroids, the sensation you get reminded me of when you open the throttle on a big bore 2-stroke motocrosser, charging toward the horizon in a rush, without the insanely stupid power band!

Doubling the speed limit with two cogs left in the ’box along a straight stretch, another thing became apparent… this bike would benefit greatly from a fairing.

And not because I’m a whiney sportsbike rider who can’t handle a bit of wind buffeting, but more because at those speeds the bike becomes a little light due to your body acting like a sail, which tends to have you wander all over your lane! The OEM Ducati panniers fitted may have also contributed to this also, though I didn’t get the opportunity to try without them.

I was mightily impressed with this beautiful machine, full of grunt, easy to ride, handling a variety of Hunter Valley tarmac (no suspension adjustments made) and a meaty yet restricted V-twin note to serenade you while you ride. Just get it, you know you want to!

Ducati has announced it will unveil five new models at the Ducati World Premiere, streamed live Saturday November 4, at 7am AEDT. […]

Changeable weather played a big role in the 8th WSBK round’s race day at Portimao’s Autodromo Internacional do Algarve. This year’s Portuguese races were held in opposite track conditions and saw different podium finishers in […]