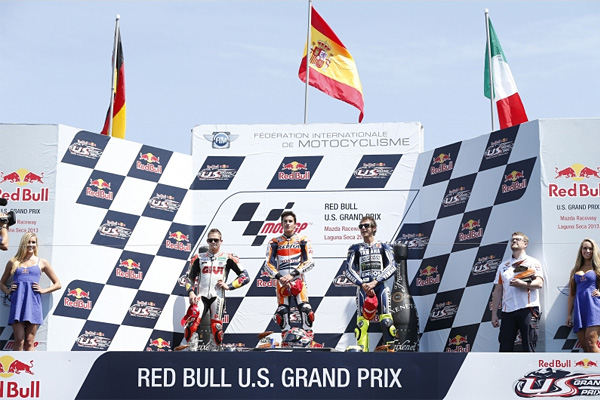 Marc Marquez
“Before I came here, I was expecting to struggle more. From the TV, this circuit looked so tricky. Since FP1 I have felt so good. Next time I’ll be able to learn where all of the bumps are and everything – yesterday I found a new bump, when I crashed at Turn 6! Anyway, today in the race it was so good.

At the beginning, with a full fuel tank, I was little bit scared because – with all of those bumps – it’s so easy to lose the front. I overtook Valentino (Rossi) then caught Bradl; I stayed behind him for about 12 laps, then tried to pass him to open up a gap. I’m very, very happy because it’s a new circuit and I’ve got 25 points. I’m very happy because it’s great to go into the summer break with this result.” 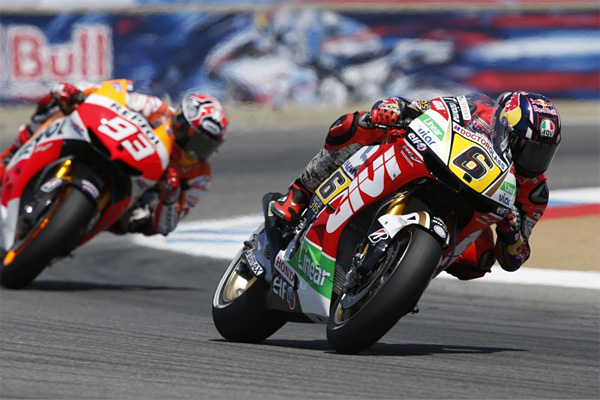 LCR Honda’s Stefan Bradl maintained his lead until lap 19 when he succumbed to rookie Marc Marquez.

On Saturday, Bradl had stormed to a maiden pole position while Marquez suffered a crash in qualifying. On Sunday, the Spaniard patiently followed the German before pulling off a clean manoeuvre at the end of the 19th lap. Five riders failed to make the distance at the notoriously difficult anti-clockwise circuit, the shortest on the calendar.

Marquez dropped to fourth after a poor start, but stayed ahead of Bautista in the early stages and crucially pulled off a confident pass on Rossi at the world-famous Corkscrew corner. He soon homed in on Bradl, overtaking the German and winning by 2.2 seconds.

In doing so, Marquez won for the second time within the space of a week and steals former double champion Freddie Spencer’s record of being the youngest MotoGP rider to triumph in consecutive Grands Prix. Furthermore, he makes history by becoming the first rookie rider to win at Laguna Seca. 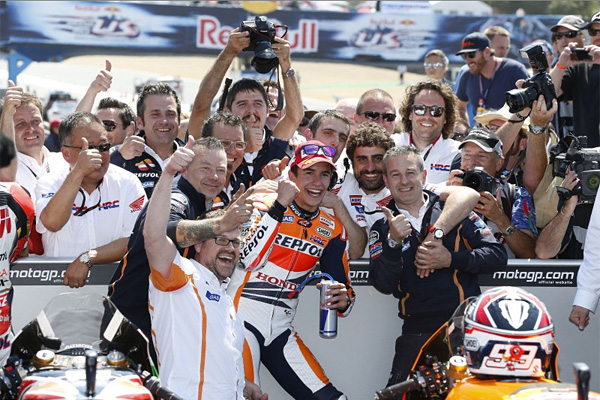 Congratulations all round for Marc Marquez.

Bradl made a clean getaway allowing the LCR Honda rider to head the field from his first ever pole in the top class. By the 17th tour Marquez was only two tenths of a second behind. finally overtaking Bradl on lap 19.

Rossi, who had famously overtaken Casey Stoner at the Corkscrew five years ago, was this time passed in the same place by Marquez going off track on the descent, barely missing the grating on the inside. Holding off a significant attack from Bautista over the closing laps, the Spaniard briefly edged ahead before the final corner, but was kept behind. Another third place for Rossi sees him jump ahead of Cal Crutchlow for fourth in the standings.

Stefan Bradl
“It’s a great result for us, we did a good job all across the weekend. Of course expectations were high after I had pole yesterday, but I knew I had good speed and that I could be fast from the beginning. I tried to push from the start and I think I did that very well.

“I struggled a little bit. I thought the race speed would be a little quicker but, with the full tank of fuel, I had a few problems with the front. When he caught me I saw that he had some more edge grip on the tyre and that he was able to open up a gap. I just tried to manage the gap to Valentino (Rossi), which was not easy, and it was a long and tough race.” 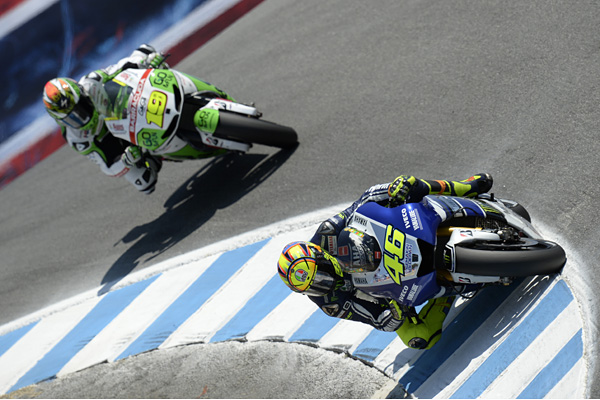 Valentino Rossi and Alvaro Bautista had a tussle for third spot on the rostrum.

Valentino Rossi
“At this track with the Yamahas we suffer a little more than the Hondas, but we worked very well in the practice, we tried everything and I could keep a good pace in the race until the end, not far from Bradl. I fought with Bautista but always stayed in front so I could take the third podium in a row. I am quite competitive and I am happy, it is a good result. Now we take some rest, we go on holiday and we try to take some rest for the second half of the season. Regarding the pass, I tried to resist but today wasn’t the right day, Marc was too strong for me. Before the end of the season we will have another battle where I will be faster and I will give back the overtake for sure!

Laguna Seca had always promised to be a weekend of damage control for both Jorge Lorenzo (Yamaha Factory Racing) and Dani Pedrosa (Repsol Honda Team). Both men continued to suffer with left collarbone injuries as they finished fifth and sixth, with Pedrosa having moved ahead of his rival at the Andretti Hairpin. The duo finished in front of Monster Yamaha Tech 3’s Crutchlow, who on Saturday had been left confused by a crash before taking part in Q2 with his second bike.

The top ten was completed by Ducati Team’s Nicky Hayden and Andrea Dovizioso – who during the race made side-to-side contact on the start/finish straight – and Avintia Blusens’ Hector Barbera, who became the first rider other than Aleix Espargaro to lead the CRT runners in 2013. Espargaro crashed at the last corner, while Power Electronics Aspar teammate Randy de Puniet retired with technical problems.

With the first half of the season now completed, MotoGP heads into its summer break before returning with the Red Bull Indianapolis Grand Prix in mid-August.

Marquez carries a 16-point advantage over teammate Pedrosa and has finished on the podium in eight of his first nine races since joining the premier class as reigning Moto2 World Champion.

The penultimate round of the 2014 eni World Superbike Championship at Magny-Cours, France has gone to Tom Sykes (Kawasaki Racing Team), courtesy of a circuit best lap of 1.36.366 after a fast and furious session saw the top spot change repeatedly in the final minutes. […]