Marc Marquez (above) produced a superb late 1’38.120 lap to smash the pole record at Jerez, qualifying 0.421s ahead of Movistar Yamaha MotoGP rider Lorenzo and 0.510s in front of his Repsol Honda team-mate Dani Pedrosa ahead of Sunday’s MotoGP race at the Gran Premio bwin de España.

Before qualifying, Marquez and his team calculated that a three-stop run would be possible during the 15 minute session, which they felt was important as the life of the soft rear tyre was apparently optimum for only one flying lap with track temperatures so high.

Marquez stole Lorenzo’s lap record from 2008 (1’38.189) – the last season in which there were still qualifying tyres in MotoGP – and recorded the fastest ever official lap on two wheels at Jerez with a time of 1’38.120 on lap eight of eight.

Marc Marquez: “I am very happy with this pole position, as it was hard fought and I wasn’t expecting it. We are suffering a little more here than at other tracks, but despite this we are still at the same level as Lorenzo and Dani. We changed our strategy at the last minute; I asked Santi if it would be possible to use three soft tyres, and he said that it was. It was all last minute and I am satisfied with how it worked out, but we know that tomorrow is the important day. Jorge and, above all, Dani have a great pace” 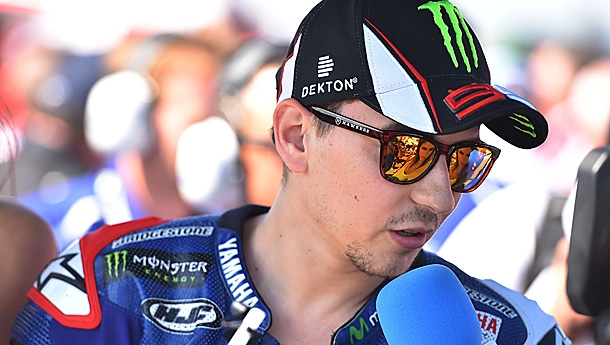 Lorenzo (above) led for much of the session, taking second at the end to secure his place on the front row of the grid for the race.

Jorge Lorenzo: “We tried our best to make the best lap time, but unfortunately with the second tyre I don’t know why I it didn’t feel the same, it felt a little more slippery which is why I didn’t improve my lap. The goal was to stay in the first row; that was important.”

“Obviously pole position would be better but the most important thing is to start well in the race, I think we have a good pace so we can definitely fight at the front. It will be important to stay close at the front for the first couple of laps, the rear tyre is going to drop a lot but I feel physically good as I did last year which will be very important for the race.”

Pedrosa opted for the normal two stop strategy, completing two flying laps with each tyre, and clocked a time of 1’38.630 placing him on the front row in third for Sunday’s 27 lap race.

Dani Pedrosa: “We took a step forward with the bike setup today and also went better with the race tyres. In the qualifying session we tried to do as well as possible, but it is always difficult to put in a really fast lap. Tomorrow we will try to get a good start, then have a good race”

Heading the second row after an intriguing Q2 run in the southern Spanish heat is the most successful rider on the grid at Jerez, with Movistar Yamaha MotoGP’s Valentino Rossi (+0.737) qualifying fourth at the track where he boasts six premier class victories.

Joining him on row two are Aleix Espargaro (NGM Forward Racing) and Andrea Dovizioso (Ducati Team). A late crash for Espargaro hindered his Q2 efforts in the final minutes and he missed out on a potential front row.

Jack Miller (Red Bull KTM Ajo) secured the third pole position of his career and the third of 2014 at the Gran Premio bwin de España, with a rapid 1’46.173 lap putting him ahead of Niccolo Antonelli (Junior Team GO&FUN) and Alex Rins (Estrella Galicia 0,0) on the front row.

In the heat of the Spanish sunshine championship leader Miller maintained his good form to qualify a considerable 0.615s ahead of his nearest rival Antonelli for the fourth race of the year. It is also Miller’s third pole in a row.