Honda Repsol Team’s Marc Marquez has become the youngest ever pole-sitter in the premier class of the World Championship for Sunday’s Red Bull Grand Prix of the Americas. He undercuts double title winner Freddie Spencer by three months.

Marquez recovered from a crash in final practice to set a blistering pace of 2’03.021 in Q2 Qualifying. The reigning Moto2 World Champion will share the front row with Repsol Honda Team partner Dani Pedrosa and Yamaha Factory Racing’s Jorge Lorenzo.

Marc Marquez
“We are happy of course, because we took our first pole position which is important and always exciting! We knew beforehand that we could fight for pole, but you never know what will happen in the session. Both Dani and Jorge are fast over a single lap, and we managed to overcome them. The important stuff starts tomorrow, because we have a long, physical race with many of changes of direction to deal with. We need to be ready, because tomorrow is what really counts and I will do the best that I can!”

Pedrosa (pictured below) missed out on pole by two and a half tenths, whereas Lorenzo appeared to avoid traffic by touring through the pit lane – only to rejoin the track too late to post a last-minute challenge. 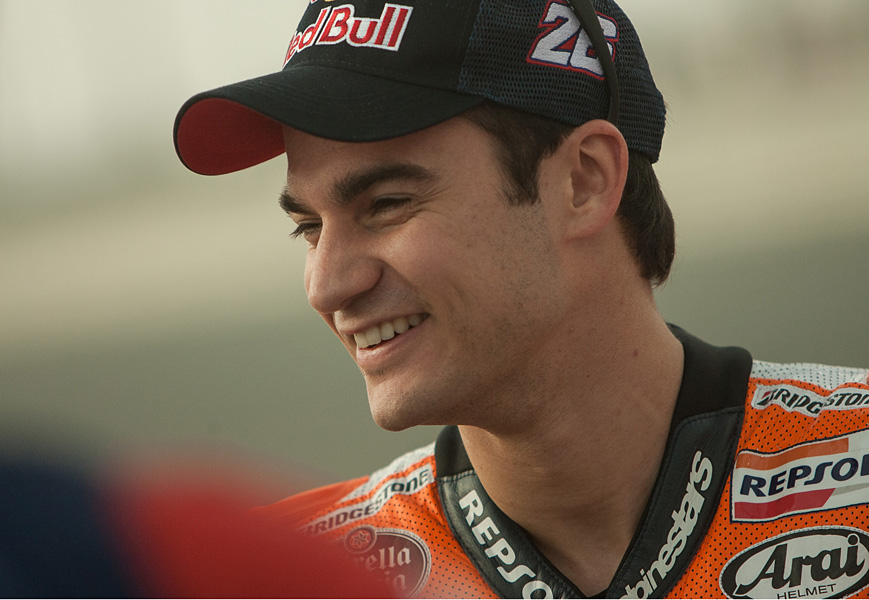 Dani Pedrosa
“The session was a little tense, as in fifteen minutes you only have time for four good laps. Fortunately we didn’t have any problems with traffic this time, and I was able to focus and put in a strong lap – faster than all but one in the end! It was a good session, and we took second on the grid which is positive, because Marc put in a fast lap and is close by. We need to try to increase the rear grip for tomorrow and work towards having a strong race”.

Jorge Lorenzo
“What happened in qualifying is more or less what happened in all the sessions: our rivals are much more fast than us in pace and on a fast lap. Our best position we could do today was third. Tomorrow in the race anything could happen. If something strange happens we can fight for the win but in normal conditions third is a really good position for tomorrow. We hope that the race is going to be better than qualifying and we can be closer to Marc and Dani.”

Monster Yamaha Tech 3’s Cal Crutchlow will head up Row 2 from LCR Honda MotoGP’s Stefan Bradl and Ducati Team’s Andrea Dovizioso. Curtchlow missed out on the front row of the grid by just under two tenths of a second. The top eight is completed by GO&FUN Honda Gresini’s Alvaro Bautista and Yamaha Factory Racing’s Valentino Rossi.

Cal Crutchlow
“I am really happy to qualify in fourth, even though it would have been nice to be back on the front row again,” said the Monster Yamaha Tech 3 rider. “But coming here with no previous track experience meant it was always going to be an uphill battle, so to finish so close to Lorenzo and be ahead of Bradl and Valentino – who both tested here last month – is a great achievement for myself and the team.

Valentino Rossi
“We expected to go better today but we were unable to fix the problem in braking, especially in the first part, and I lose too much time. We still have tomorrow, we knew that this weekend on this track it could be difficult and in fact it is. We have to make a good race and try to take as many points as we can.”

Ninth on the grid will be leading CRT rider Aleix Espargaro, as the Power Electronics Aspar rider not only jumped up from Q1 but proceeded to out-qualify both Ducati Team’s Nicky Hayden (10th) and Ignite Pramac Racing’s Ben Spies (12th). Between the two Americans will be Tech 3 newcomer Bradley Smith, starting 11th in Round 2.

Karel Abraham has sustained a fracture to his right collarbone following a collision with Staring in Q1. The Czech has since undergone surgery in the Brackenridge University Hospital of Austin and has been declared unfit to race on Sunday.

Up and coming Australian superbike star, Daniel Falzon, will join the Yamaha Racing Team (YRT) for the 2018 season on board the factory supported Yamaha YZF-R1M to contest the ASBK championship. […]