At 20 years of age, Honda Repsol Team’s Marc Marquez (above) has become the youngest ever race winner in MotoGP, triumphing in Sunday’s inaugural Red Bull Grand Prix of the Americas. Team-mate Dani Pedrosa finished 1.534 seconds behind him in second position, with reigning World Champion Jorge Lorenzo completing the podium.

The young MotoGP rookie, completed a perfect weekend with pole position, fastest lap (2’04.242) and victory, for his maiden MotoGP win in just his second race.

Marc Marquez
“After taking my first podium in Qatar I was very happy, but I am even more so today after my first win! It went better than I expected and I am very grateful to the team for their efforts over the preseason; we have worked very hard and, without this, the victory would not have been possible. The race was very intense and physical, as I followed Dani for many laps and then decided to launch an attack and try to open a gap with ten laps to go. I could not pull the gap I wanted as some problems emerged that we’d experienced throughout the weekend. Despite all this, we were able to take the victory.

“The 25 points are important, but what is more important is to have achieved a win in my second race in MotoGP. We realise that more difficult circuits lie ahead for us, but we will try to give 100% at all of them. Our battle is not the one for the championship, but rather taking it race-by-race and enjoying every moment”

Marquez and Pedrosa played a tense game of cat and mouse throughout the 21 laps, Pedrosa grabbing the lead after Marquez ran wide at the first corner. The positions stayed that way for the first 12 laps, Marquez happy to wait behind his more experienced team-mate. Finally, on lap 13 he dived ahead at Turn Seven. Pedrosa did not give up and was on the new leader’s rear wheel for the next few laps, until he made a mistake on lap 19. That lost him a second, putting him 1.6 seconds down, but still he did not give up, closing the gap to 1.2 seconds as they began the final lap. That was too much of a disadvantage, however, and Pedrosa realised he had to be content with second today. The pair crossed the line 1.534 seconds apart.

Dani Pedrosa
“Today’s race was good and I’m happy with this second place. We had great pace, even though we knew that Marc was very strong. I tried to ride my own race and in the end I was losing a lot of time on the chicanes. I was tiring physically and I could not handle the bike well – especially in the first part of the circuit. In the second section of the track I was recovering quite a lot of time, but it was not enough. Furthermore, in one of the three laps before the end I made a mistake, lost around 1.5 seconds and Marc was able to get away. That was the point at which the race was lost for me. Still, I’m happy, my riding was pretty good today and I have improved compared with Qatar. I have to congratulate Marc as well, because he did a great job! Now we need to focus on Jerez – a circuit I like a lot”.

A less than perfect start from third on the front row saw Lorenzo lose position approaching turn one but he was quick to come back as the race settled in. He was able to maintain third position to the finish line, holding distance to fellow Yamaha Cal Crutchlow behind in fourth and close down the gap to the front to just over three seconds at the flag. The result delivers an incredible 100th podium finish for the four-time World Champion ten years after he scored his first with victory in Brazil in 2003.

Jorge Lorenzo
“Yesterday we were so far from Marc and Dani but this morning in the warm up we found something. The hairpin corners we normally take in first gear we made in second so it improved a lot the feeling and the acceleration, but it was not enough. Just a little bit more, maybe two tenths quicker and I could have fought with Dani and Marc. Today third position was the best we could do. I want to congratulate Cal who didn’t give up until the end and also Marc, he’s the youngest rider in history to win a Grand Prix; he is a phenomenon.

“It’s an important day for me; I never thought to get this unbelievable number of podiums so today is a magic day. Time flies very quickly, it seems like it was just yesterday that I got my first victory, which was my first podium in Brazil in 2003 ten years ago and now today my 100th.” 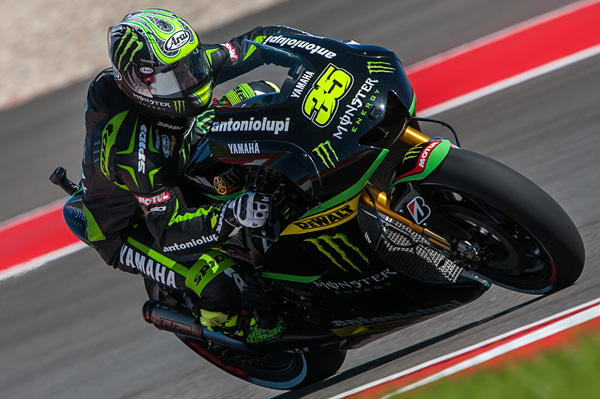 Cal Crutchlow (above) was highly pleased to have come home fourth. The Monster Yamaha Tech 3 rider, who had started the race in the same position, had not tested at Circuit of the Americas beforehand.

Cal Crutchlow
“I’m very pleased and we did a better job than any of us expected before we arrived in Texas. With no testing here, I was worried that it would be more of a struggle – and the fire in the garage on Wednesday (night) meant we couldn’t do any of our normal preparation work. The most pleasing aspect of the race was my consistency. Unfortunately I ran wide while trying to pass Bradl, but I managed to fight my way back through and I was running the same speed as Lorenzo for a long time and that gives me a lot of confidence to take into the next few races.

Completing the second group was LCR Honda MotoGP’s Stefan Bradl in fifth and Yamaha’s Valentino Rossi in sixth position, with the multiple title winner having overhauled Go&Fun Honda Gresini’s Alvaro Bautista. The latter would also fall behind Ducati Team’s Andrea Dovizioso, who progressed to seventh on the final lap and then avoided a last-corner lunge from his rival. Leading American rider Nicky Hayden and Energy T.I. Pramac Racing’s Andrea Iannone rounded out the top ten.

Andrea Dovizioso
“I would have loved to do a lot better than we did today,” he told motogp.com in a video interview, having spent much of his childhood in Texas. “There was basically no choice. This morning we had a little bit of a problem with a nerve in my chest, for some reason. I don’t know whether it was over-compensating with my shoulder, but my shoulder has got a lot better from Qatar which is really, really good.

“Two laps from the end of the Warm-Up I had a twinge in my chest and it felt like there was a knife in it. I don’t know what happened. We went to the Clinica Mobile; they worked with me a lot and got me ready for the race.

“No excuses: I tried as hard as I could and it wasn’t good enough today. We need to work harder and get back to 100% because we’re definitely not there, physically, right now.”

Bryan Staring
“I am really happy to have finished the race here, which was important for me in terms of learning the lines from the other more experienced riders and the fact that we managed to improve on our best lap from practice. Overall I think this proves that we need more time on the bike to adapt and to become more competitive in this class.”

It was a hugely disappointing afternoon for Came IodaRacing Project. Danilo Petrucci was fortunate to stay upright when teammate Lucas Pesek crashed out of the race directly behind him, only to retire in the pits with mechanical gremlins only minutes later. Colin Edwards was also on the sidelines, as the local Texan hero racked up the unenviable fact of becoming the race’s first of three retirements.