At the Commercial Bank Grand Prix of Qatar, Yamaha Factory Racing’s Jorge Lorenzo (above) became the first pole-sitter under the new look MotoGP Qualifying format whereby the top 12 riders go head-to-head in a 15-minute shootout for the top spot. Lorenzo’s seventh career pole position at the Losail International Circuit will see him lining up alongside Britain’s Cal Crutchlow and Spanish compatriot Dani Pedrosa.

Jorge Lorenzo
“It’s great to finish in pole position, especially knowing Cal was extremely fast over one lap,” the Yamaha Factory Racing riders told motogp.com. “When he did a 54.9, I didn’t think it would be possible to beat it, but I put in everything I could and did a very good lap.

Discussing the new Qualifying format, under which only 15 minutes are on offer to seal a position between pole and 12th in the Q2 phase, Lorenzo continued:

“It’s very different to last year and I think more fun for the fans to watch. From the point of view of the riders, I feel more nervous and with more pressure on me because you know you have only four attempts for your last lap – and not 15 like last year! So it’s more important to go quickly and not make a mistake.

Lorenzo’s teammate, Valentino Rossi failed to impress and will start from the third row in seventh spot. 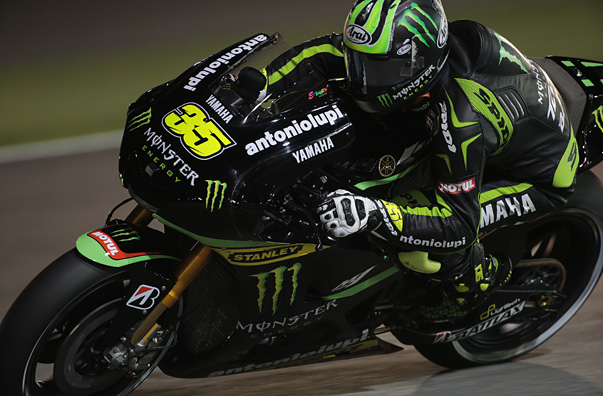 Yamaha Monster Tech 3s Cal Crutchlow (above) has been in the top three for much of the race weekend. He narrowly missed out on pole by just two tenths of a second having abandoned his final run at Turn 1.

Cal Crutchlow
“I’m happy. I think we did a good job and the team have worked well over the weekend. I still think we need to find something in some areas because I’m riding a little differently to what I usually do in order to compensate. We can look at the data tonight and come back tomorrow, as we have the warm-up before the race to try again.

“Tomorrow you can expect to see a big battle, I’m sure, because there are seven riders able to challenge at the front and probably seven who are able to win. So it’s going to be a close race. Really close.”

“It was tight, 15 minutes is not a long time when you’re on the bike and, even though there were only 12 riders on the track, it’s still not easy to find a gap. It’s important that we’re on the front row. I think the Yamahas are strong, so I just hope to improve the bike a little bit more and then be on the pace for the race.”

Dovizioso’s Ducati Team debut brought what he regarded as a remarkable result in Qatar on Saturday night, holding a front row grid slot until the very last knockings of Qualifying. The Italian will start Sunday’s race from fourth position.

Andrea Dovizioso
“I didn’t expect to do a 55.1!” Dovizioso smiled when discussing his session in a motogp.com video interview. “It’s really fast and I’m so happy because, when I pushed really hard with the tyres on the last lap, I had a really good feeling with it and that was really good to experience. We had a few problems with the front, but the track improved a little bit and the wind was blowing in the opposite direction it had been in all of the practice sessions, which helped everybody to improve.”

One of f three rookies in the top ten, Energy T.I. Pramac Racing’s Andrea Iannone heads the fourth row from Ducati’s Nicky Hayden who is 11th.

Up in capacity from the 821, Ducati’s Hypermotard 939 is open-class again… but is it open class insanity? […]