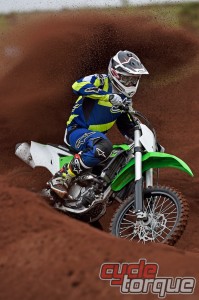 There’s no doubt the 2017 KX250F is a very important model for Kawasaki, and what better way to showcase their newest model than to head off to what is arguably one of Australia’s most popular motocross destinations right now, Ride Park Vic, situated a comfortable 45 minutes drive west of Melbourne.

Things weren’t looking so great however, as shortly after we arrived the heavens opened and dumped torrential rain on the circuit.

In a stroke of genius, the Ride Park crew worked tirelessly during the night and trucked an unbelievable amount of sand into the carpark and built a temporary track just so us media mugs could still have a spin on the KX250F.

The track was short and quite sandy, which if you check out our short video you will see.

So while conditions weren’t ideal, we still managed to spend a solid day upon the KX250F and came away impressed with what the 2017 model had to offer.

Faster is the first thing I noticed on the track, the free-revving feel to the engine is still there from previous years but the low- and mid-range power comes on much stronger.

Gear changes aren’t as critical thanks to the extra punch, and if you’re in the tight stuff you can lug the KX around a bit easier at low revs.

In the sand the KX blasted through deep turns easily, maintaining speed and transferring plenty of power to the ground.

Through the uphill rollers we were able to stretch the Kawasaki a bit more where the top-end power is as strong as ever.

At no point did we find the green machine signing off early or revving hard while going nowhere.

The clutch action works great with an easy pull, and the standard gearing was just fine around the short test track.

The overall feel of the engine is much smoother and more refined thanks to many of the upper engine changes, and even though there are no apparent gearbox changes, gear shifting appeared to be a bit easier and not as ‘clunky’ as we have experienced in the past.

The new bodywork and chassis certainly gives off a slimmer profile to the Kawasaki, and anyone jumping off a 2016 model will notice this immediately.

The general body positioning is much more aggressive and ‘on-top’ of the bike.

The flatter seat and narrower shrouds allow for much more body movement, making it easier to shift your weight through turns and towards the rear through the rough stuff.

The narrower profile gives a more nimble feel as you flick the bike around the track, and dart from one line to the next.

The weight savings didn’t appear to be as evident as the narrower profile, but that’s not to say the KX250F wasn’t light and agile already.

As far as handling and suspension goes, the short sandy test loop didn’t offer much variety or a mix of conditions that we would normally ride, so it was difficult to come up with a solid opinion.

That being said, the Kawasaki was predictable in all areas of the track during the day and never once threw us off guard.

Through turns the KX held its line well and was smooth and stable under acceleration.

Due to the soft sand we decided to stiffen up the Kawasaki on the compression, at both front and rear of the bike which worked well to hold the bike up and give less of a diving feel through the deep sandy corners.

Through the sand whoops the KX was stable and maintained straight line stability without bottoming or deflecting in the rear.

The overall feel was great around the sand loop.

Due to the conditions, it’s can’t be said definitely, but it can be said with a well-educated certainty the KX would handle just as well in more typical, drier conditions. 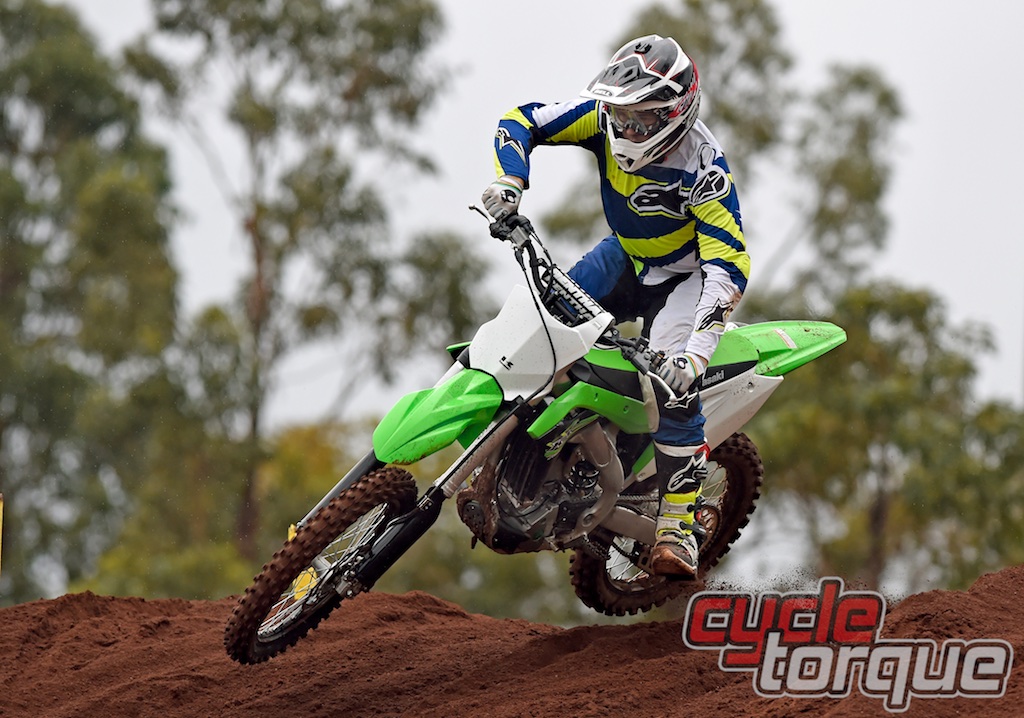 Tom Sykes (Kawasaki Racing Team) has clocked another outstanding lap-time to grab his sixth consecutive Tissot-Superpole out of 7 held so far in 2013 – the 17th of his career. […]