Leaving the tar
While I’m sure KTM wants to steal some sales from Ducati, BMW might be an even bigger target. The R 1200 GS has been phenomenally successful, and justifiably so – every model has been a great bike, and the latest version, with water coooling, is no exception.

So the 1190 Adventure coincidentally has the same wheel sizes as the GS, but they are standard tubeless spoked rims, which is an optional extra for the GS, similar suspension travel levels and comparable seat height.

They certainly differ in feel – the 75-degree V-twin of the KTM sends a few vibrations to the rider which is different, but not worse, than the shakes of the Boxer BMW.
There is an off-road setting in the electronics which allows the rear tyre to move around a lot more than the traction control will let it in on the bitumen, and you can always turn it off if you have the skill set of a Chris Birch.

The same goes for the ABS, it’s very customisable. Indeed, if you’ve never entertained the joys of riding on loose surfaces, the 1190 Adventure will let you learn with ABS on and as your skill levels rise you can reduce your safety net at your own pace. 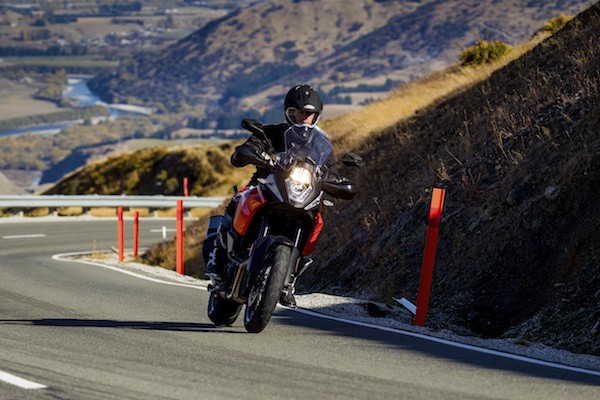 Who should buy one
Cycle Torque has a habit of saying more Australians should ride bikes with longer suspension travel and a comfortable, ergonomic riding position – adding dirt road ability is certainly an added bonus.
The 1190 Adventure certainly ticks all those boxes, with few flaws we could find during the bike’s New Zealand launch.

If you’re in the market for a large capacity machine for long distance riding, the Adventure really fits the bill. It’s still too big and heavy to replace an enduro machine, and if you suffer from Duck’s disease (arse too close to the ground) you’re going to struggle with the seat height, but for everybody else, do yourself a favour and get a ride on one.

Former World Supersport Champion and MotoGP winner Chris Vermeulen attended the launch of the BMW F 800 GS Adventure and spoke to Cycle Torque about the bike, his standard F 800 GS. Watch this space […]