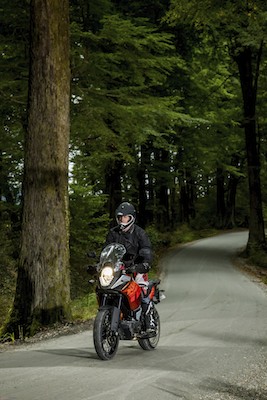 Given that an Adventure bike must cope with everything from hard-core sports riding to making the rider feel like he’s a motocross legend, there’s always a few compromises, but there’s no denying the new 1190 Adventure is capable in all the conditions the vast majority of riders will find themselves in – and maybe even in conditions you wouldn’t normally go near…

KTM’s resident Kiwi nutter, the Red Bull Romaniacs winner Chris Birch, demonstrated for us the potential of the new 1190, riding off-road seemingly like the bike was a 350EXC, keeping the big beast sideways under extreme power for ridiculous amounts of time and making it all look easy.

His approach is to ride with the same technique as you would on a smaller bike, saying, “I own a 990 myself and take guys out for lessons on roads like this.
The techniques are always the same. The main thing I remember on an adventure bike like this is, without knobby tyres you don’t get as much warning if you are going to lose the front – so I take it a little easier in that respect.”

Check out www.chrisbirch.co.nz or Google Red Bull Romaniacs to see what I mean.

Sportsmode Ducati’s Multistrada is an awesome bike – Cycle Torque’s project machine is going off to a new owner as I write this and it will be missed.
The big Ducati has been successful too, and I reckon KTM had the Multi in its sights when it built the 1190 Adventure – the Sport riding ability of the new machine should not be underestimated.

With its 19/17-inch wheel size combination, there’s a variety of rubber available and some of it’s pretty sticky, although KTM obviously didn’t want to go completely head-to-head with Ducati and fit the bike with a pair of 17-inch rims.

The power output is up to Multistrada levels and it’s a confidence inspiring ride on twisty roads. You can ride this bike seriously hard on the bitumen.

My first impression riding the 1190 was that it felt ‘right’, instant confidence. I am not a hugely experienced adventure rider and I want to feel right at home immediately and not feel burdened by too much size – the 1190 gives me that confidence.

For a large bike, it doesn’t feel overweight or sluggish. In fact, we headed straight out into the twisty Alpine areas and I felt relaxed tipping into hairpins and rolling onto the throttle straight away.
The riding position seemed to put me in a relaxed position, which meant I was naturally riding smoother.

The response of the engine works with this idea as well – the twin spark configuration means you don’t have to have this bike revving hard to get good response.
I made a mental note at the first stop that this combination of design elements and overall ‘feeling’ would be a good thing at the end of a day’s ride, because it means you can hook in and have a go, but not feel totally spent.

When you get more aggressive on the throttle, the whole bike responds in a good way, like a big V-twin should. The result is a bike that can be easily controlled at low revs – no lumpiness or clutch riding.
This then encourages a smooth riding style but also have its neck wrung when the time comes.

I put it down to the twin spark configuration. Only one plug provides the spark in each cylinder at any one time, but they operate depending on throttle position and with different intensity.
This means you can have a gentle spark at low revs, and a more aggressive spark when you really want the power.

The idea is the engine should become more compliant and easy to ride down low (or off-road), but still pack a punch up high. 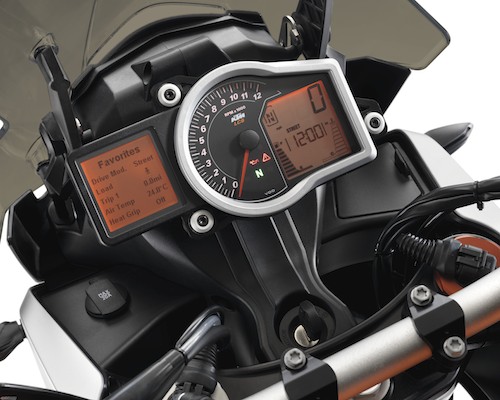