BACK in the day Kawasaki’s Z1 and then Z1000 were the bikes to have if you wanted high performance, reliably, and street cred. If you had one of these jiggers you were king of the kids.

The cult movie Stone came out in the mid ’70s and the headline act was the Z1. Then over the years, especially after the Z1R, the bike was watered down somewhat to become a fat bloated version of its old self. 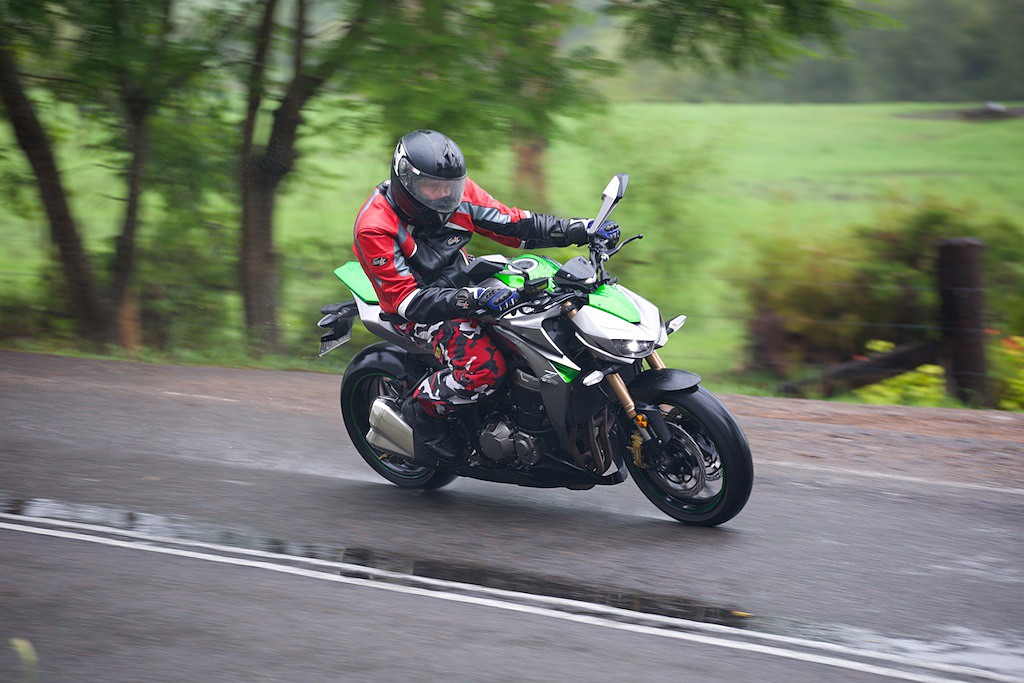 But come 2003 that all changed. The first new generation Z1000 was a reincarnation of the old bike if you squinted your eyes real hard, but the ethos was still the same; a big capacity four cylinder engine in a naked bike built to run fast.

Times had changed though. Whereas the old machines were the final word in fast street riding or production racing, that was now the domain of bikes with mega horsepower and full fairings. 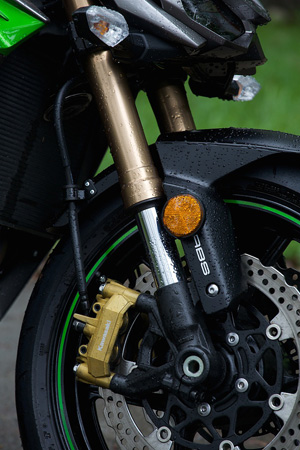 But what the new Z1000 gave riders was a bike which was fun to ride on the street. Sure it could go fast, real fast, but it could also handle commuting and touring duties too, and do it comfortably.

Generation four
Over the last decade the styling has changed on four distinct occasions but the family lineage is still readily recognisable. To me it’s very much in the mould of the ‘Streetfighter’ look which was popular back in the late ’90s, early noughties. Tail up, nose down is what it’s all about.

Kawasaki reckons the styling is based on a crouching predator or something like that. The main thing I like is the fact Kawasaki has kept the four muffler style made famous by the original Z1 all those years ago.

Under the distinct styling is an updated version of the Z1000 donk, which is still based somewhat on the ZX-9R engine, which was a beauty. For 2014 the 1043cc engine has been tuned for more mid range and top end power. And of that there is plenty. The funny thing is the bottom end stomp also feels stronger but this is most likely because of the lower gearing.

Helping achieve this change in power delivery are changes to the intake camshaft, airbox, ECU and taller velocity stacks on the 38mm throttle bodies. Redline is 11,250 rpm. It’s a pretty basic package overall, technically speaking, and that’s a good thing I reckon.

With no fly-by-wire there’s no traction control, and while there’s immediate response from the throttle (helped by the lower gearing remember), the bike is still easy to ride at lower speeds because Kawasaki has pretty much nailed the fuel injection fuelling. 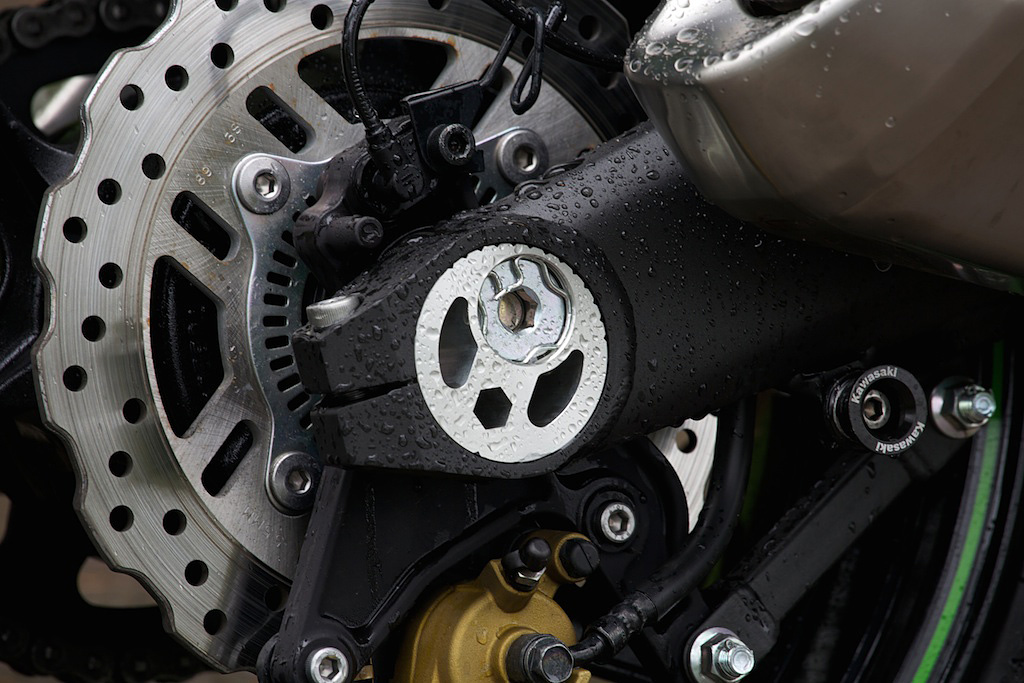 For 2014 the frame is cast as one unit to reduce welds and therefore reduce flexing. Whether this is for the better in the real world is hard to tell and here we all thought some frame flex is good. As you can see the engine is a stressed member which means there’s no bottom frame rails.

And to help people with shorter inside leg measurements Kawasaki has changed the rear subframe to make it narrower under the seat, therefore

reducing the reach to the ground.

Showa separate-function SFF-BP 41mm forks are fitted up front, and these are seriously top end stuff for a naked bike. You alter spring preload in one fork and compression and rebound damping in the other. Out back the single horizontally mounted shock can be adjusted for preload and rebound damping but no compression.

Other trick stuff includes the Tokico monoblock four-piston calipers (with Bosch ABS standard) and the instrument cluster which is quite tiny. It has all the info you need but I prefer the old style digital/analogue set-ups which would suit this bike better I reckon. Less Flash Gordon for me I think.

Ride me it said
There’s not much to dislike on the new Z1000. Older models had pretty basic suspension I thought and as a result on bumpy roads I felt they were over sprung and under damped. The latest bike has much better kit fitted.

As delivered for test it was on the firm side but I played around a bit to soften it up and I liked it much better. That said it still performed like it should when punting it hard through the bends.

Result
This curve swervability is backed up by the great brakes. There’s plenty of initial bite and the power of the monoblock calipers is impressive. The riding position suited me to a tee. There’s not much padding on the seat but if you are touring an Airhawk or similar would fix that.

Of course having no fairing you cop plenty of wind blast at sustained higher speeds but if that’s not your go then get something with a screen I guess. 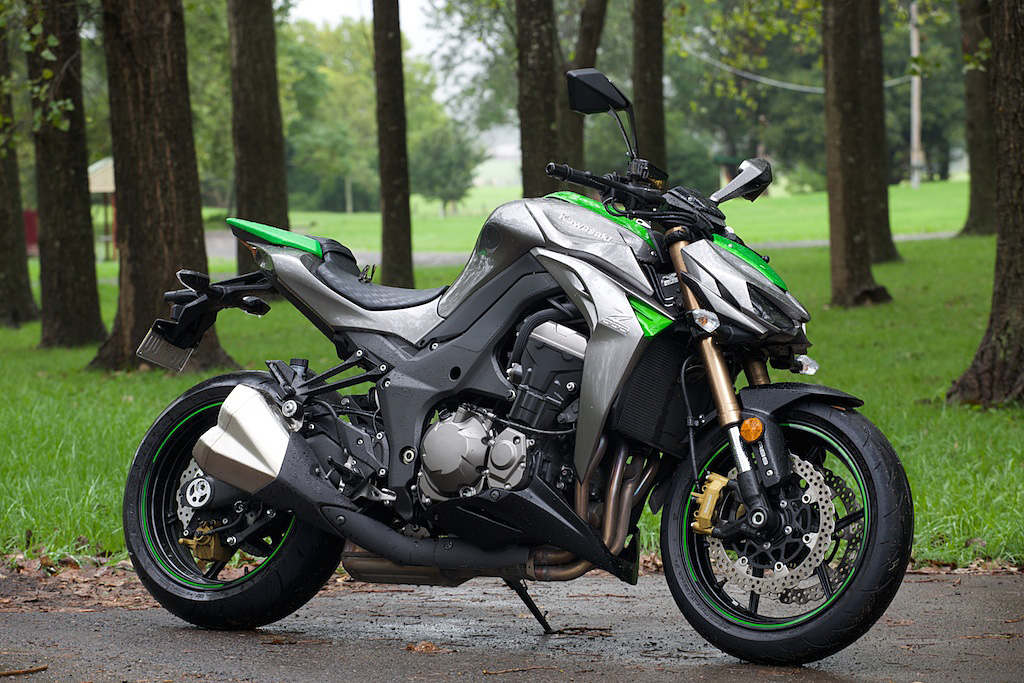 Acceleration is, well, scintillating. Not ZX-10R scintillating but in this package it feels almost as fast off the bottom. Wind this out and you are still going plenty fast. Around 240-250 km/h fast. There is also a fantastic induction howl from the airbox when you accelerate hard. It’s intoxicating it is.

The bodywork and rear seat doesn’t really endear itself to pillions or luggage manufacturers but I’d put something like a Ventura rack/bag system and a Bagster tank cover/bag set up and you’d be away.

Overall
This is a hard bike to dislike. It’s certainly edgier in both styling and execution than earlier modern generation Z1000s and while this will attract certain buyers it might lose others. One thing’s for sure, take one for a test ride and you’ll be hooked. This is a lot of machine for your money and you also get all that history. So whether your riding gear consists of modern Ninja look leathers or retro kit you’ll fit right in with the new Zed Thou.

DUCATI’S 1199 Panigale and its higher spec ‘S’ sibling are very much riders’ machines. They are undoubtedly very fast, they are frantic to ride, they are not all that comfortable if you are commuting or touring at a snail’s pace. […]