IT TOOK eight months to think about, only two weeks to organise.
Originally it was to be a group of six friends, a Winnebago, and a sunny road trip up the North Coast of NSW, across to the Northern Territory via QLD.

Then a character building solo drive in the Suzuki Kizashi from Sydney inland. An option of flying to Mount Isa via Townsville also… until, (over a couple of playful beers), the obvious was stated…..“why not ride a Suzuki DL650A to the Northern Territory, take the Birdsville Track and the Flinders Ranges!” 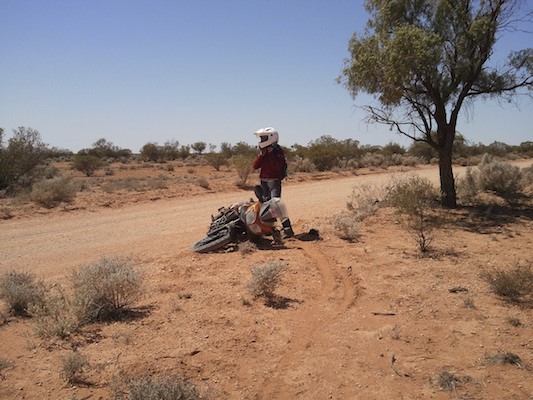 Couple of days later it was in motion. I received a call from Rod and Tracey at Mud N Tar, the Suzuki Dealership in Wauchope saying they would like to join me, but we need to go in the next two weeks. Departure was the 7th October, any later it would be too hot.
I emailed the boss at Suzuki (Perry Morison) and asked if he would mind if I gained some extra product knowledge on the Suzuki DL650.
Perry was more than obliging. With the bike arriving at Action Motorcycles in Parramatta for a first service and new tyres, we chose the Dunlop TR91, I wanted a tyre that had enough tread to last 7,000kms and would also be suitable for 1000kms or more of dirt roads.

The 39 litre Givi top box was large enough to carry two weeks of gear. Being a female of the species, that is a good amount of space.
I did take wet weather gear, but with temperatures reaching 47 degrees, it wasn’t needed. I preferred the top box option because your luggage stays in one place… I find travelling long distance, a nd especially on dirt roads, bags strapped on have a way of shifting.
You also have the worry of straps moving, coming loose and your luggage and all its contents including underwear thrown across the highway (previous trip).

The genuine Suzuki hand guards fitted are an extra option, and worth every cent. The rocks, rugged terrain, road trains four carriages long all have the ability to throw debris at your fingers, feeling like glass marbles hitting your knuckles. The guards were a great size and I didn’t find them too bulky, so they didn’t look out of place.
A lowering link was ordered online, at the very last minute (four days before leaving). I wasn’t surprised when it never arrived.
However as I have a little height issue, concerns were creeping in about my ability to ride the DL650 long distance comfortably, without having to watch my footing. This wouldn’t be an issue for some riders, as the seat height standard is 835mm.

Fortunately for me the staff at Action Motorcycles in Parramatta spent the early hours of Saturday morning setting the suspension and fitting a custom lowering link that dropped the bike around 40mm. This was just enough to get one foot comfortably on the ground and still leave plenty of ground clearance. 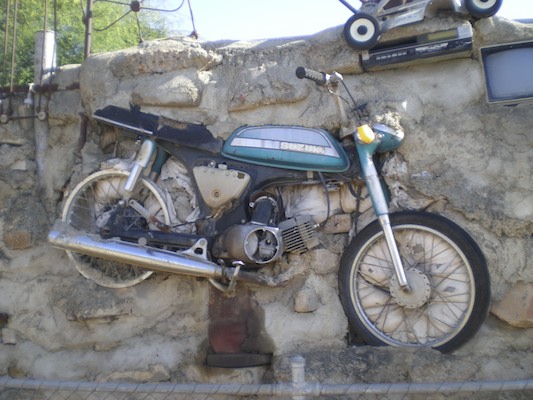 With the bike all set up we left full of excitement, adrenaline and a little bit of apprehension for the unknown journey ahead.

A group of motorcycle enthusiast friends escorted the two DL650s full of luggage to Lithgow, NSW.
After a cosy breakfast we departed for our two week journey. Day one we arrived in Cobar, but not without under estimating the fuel consumption, running short 30kms from town. Both Suzuki’s filled up at the same time, but as Rod and Tracy were two-up, with a top box, panniers, tool bag and water bag, the fuel didn’t ‘travel’ as far.
We stopped into M & C Parisi Motorcycles in Cobar, for a friendly chat with Claude and Mario. Lots of good advice was given on how to tackle the Wild West. As Claude will tell you “they are out West but not out of touch”.

Heading further West to Broken Hill, we again under estimated the fuel consumption and ran short 10km’s from town. The fuel consumption varied dramatically from the high speed highways to the low speed dirt tracks.
After miscalculating the fuel the second time we decided, as excited as we were it might be wise to pay attention and use the large LCD trip meter. The DL650’s 20 litre fuel tank is a good size, the average fuel consumption after paying attention was between 300- 350kms. Broken Hill – Leigh Creek- via Yunta and the Flinders Ranges. 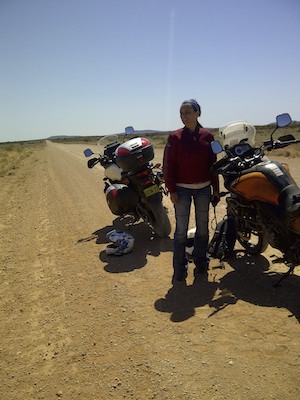 I hit the dirt at an easy 100km/h thinking I can ride this dirt track, I am no expert but it’s not my first time on the dirt either. I was content in the knowledge that the Suzuki was capable of the rough terrain. However my capabilities fell short of requirements, my attitude a little too adventurous and the front end started tank slapping. Full lock handlebar to handle bar.
I took a deep breath loosened my grip and rode through. As the handle bars straightened up I took a sigh of relief before the handle bars were moving from left to right again without my assistance. As I rode through the second time I dramatically dropped my speed to 60km hour.

By this stage and still upright, I gained extreme confidence in the bike’s ability to get me safely to the other side. The weight of the Suzuki at 214kg is heavy enough to make it stable and light enough to manage in awkward situations. The Flinders Ranges were rugged terrai n that varied tremendously. The road traffic was non-existent. The scenery was something I could never have imagined.
Day three and we had travelled over 2000kms. I could not believe how comfortable the standard seat is. Rod and Tracey’s DL650 was fitted with a dual Hawk seat, no complaints all round.

The Flinders Ranges are up there with one of my most difficult roads travelled, but the Suzuki made it achievable and very enjoyable. We really felt we had accomplished something when we told the owner at the local store of our journey and he said, “you came across that dirt road, on those motorbikes? Crickey!”

Not as easy as it sounds

A good night sleep in Leigh Creek, breakfast at Maree in South Australia and we were ready to start the Birdsville Track. We started off on the track in denial. The track itself is only 512kms of dirt road and the advice we were given before we left Sydney was that it had been freshly graded and was like a speedway. 10kms in, and the track was fantastic, we were joyous and laughing at how smooth it was and how our fear had been needlessly magnified.
We joked about how we would have to make up stories about how difficult and dangerous the journey was…
11 hours later, harsh realities were highlighted by three flat tyres, 12 empty air cylinders used for the repairs, a punctured metal fuel can that had been strapped to the back seat, and we were left sitting on the side of the road watching the sunset. 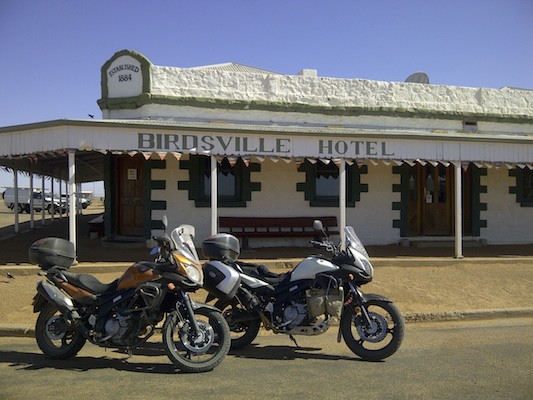 One 4WD, the only vehicle we had seen for the last five hours fortunately carrying a compressor was enough to get us to Birdsville well into the night. We had made it, we had travelled the Birdsville Track! With an early start, breakfast in Bedourie we were on our way again, or so we thought. 20kms out of town the tyre gave in. This time it wasn’t just a punctured tyre. Travelling 100kms on dirt in the dark the night before, with a slow leak in the rear tyre the rim had received a number of buckles. This time a roadside grader with a built in compressor on the side of the road was on hand to give us some air. The tyre was pumped up and we were back in Bedourie.

Phone calls were made to “Bike and Tyre” the Suzuki dealership in Mount Isa. Bedourie being located on the edge of the Simpson Desert meant all mail arrived by plane, once a week!
Much to our relief the tyre and tube was delivered the next morning.
Sitting in a tin shed (the airport) eagerly awaiting the arrival of a new rear tyre and a tube. We had no issues with customs!

Both Vstroms had made it to Mount Isa, with only 100kms to the Northern Territory border town of Camooweal. With our newly earned respect for the Outback, we were extremely keen to get to our destination. But it wasn’t over. This is when the genuine Suzuki Engine Crash Bars fitted, saved my life and my leg, during a decision, not one of my best, to ride from Mount Isa to Camooweal on dark.

Tracey, Rod’s passenger and patient wife, was very reluctant. We had completed the Birdsville track the day before so I was feeling completely capable of just about anything. Whilst travelling on dark at around 110kmh it was no surprise, but a real inconvenience to see Skippy. Watching him gracefully and elegantly take one smooth leap out of the scrub, and a second leap had him wrapped around the front crash bar. By this stage I was a little shaken and my fellow riders could hear squealing.

It wasn’t from the kangaroo or my bike, it was from me! The kangaroo had hit the front of the Suzuki, bounced off the crash bar and my leg, and like a big fur ball rolled off to the side of the road. My squealing carried on for a few minutes, before I realised I was okay and the bike was still upright. Remarkably the engine crash bars took the full brunt of the the incident and no damage was sustained to bike or rider.
The only sign of my fury friend was a slightly swollen leg and fur stuck to the front guard. 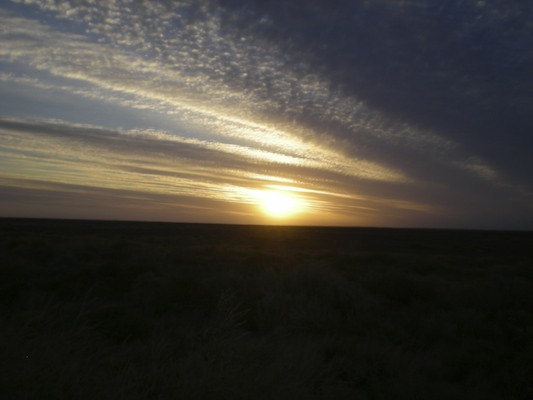 We carried on the next 80kms at turtle speed and we all promised we would never, ever, ride in the Outback on dark again. Crossing the Northern Territory border is a great feeling, and being rewarded with 130kmh speed limits is a bonus. We had travelled through NSW, South Australia, Queensland and the Northern Territory. The bikes had taken us on a remarkable journey with memories we will never forget.

The return trip home through Queensland was more relaxed. Rod and Tracey departed at Walcha were I headed off to the Ducati Owners Club’s, 31st Thunder Rally in Nundle. The 6,700km I had travelled had earned the Suzuki two trophies; Longest Distance Female Rider, and Longest Distance Asia/India/Subcontinent Motorcycle Rider. My advice to every motorcycle rider is “you should try it”.

If you have the right bike it is so easy to do. Try not to get so excited that you forget to pay attention to your fuel consumption, twice.
Use the trip meter!