ALTHOUGH Hyosung doesn’t quite have the same kind of extensive model range of its Japanese competitors, the company is doing quite well at wolfing down a tidy chunk of the LAMS market. After dropping the 700 vee twin cruiser and opting to stick with a LAMS only spread of models, you could argue that it was a smart strategic move to stick with a good selection of models and styles that are 100 per cent LAMS approved. 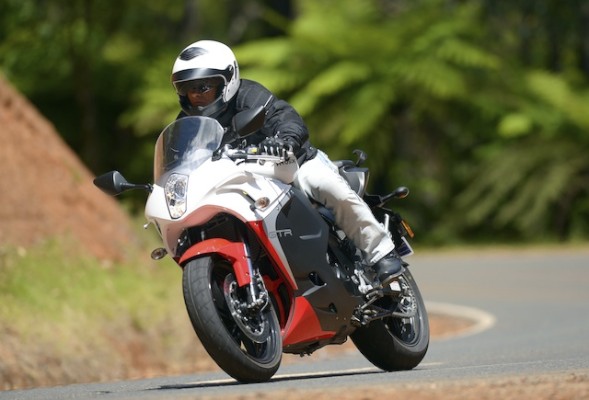 The seven models in the 2013 range offer a solid range of choices and the company already is looking ahead to 2014 when it will introduce an all new liquid-cooled 250cc single with EFI. It will apparently be offered in a more compact faired sports version and aggressively styled street fighter. And it makes sense too when you consider that some learner riders might prefer a more compact steed than the full-sized GT-R model that sports a lower seat height, and price. I have ridden most, if not all, of the bikes that Hyosung offers and I was particularly keen to get a good bash on the GT250R after my first taste of it three years ago.

Actually the Cycle Torque video of that early model is one of the most highly watched videos on Cycle Torque’s YouTube channel with more than 155,000 views at the time of going to press. Check it here on  But, before I get ahead of myself, where is Hyosung in the market today? Well, the brand is currently ranked fourth in the 250cc segment behind Honda, Kawasaki and Yamaha while sitting just ahead of Suzuki, CFMoto and the rest. Hyosung is ninth in the over 250cc segments and ninth overall of the 31 brands currently competing in the roadbike market.

The launch of the 2013 Hyosung range kicked off in Melbourne and took us east out of the city to Gembrook, through Healesville, through Toolangi and via King Lake where some of my fellow scribes witnessed a Queensland bloke, who we’ll call Lucky, punt his mate’s TRX850 Yamaha off the side of a super steep embankment bordering on cliff status.
I was riding the GV250 at the time and had onboard cameras mounted, but arrived on the scene within about a minute of the abseiling Yammie going over. After a joint effort to drag the bike up the incline and check that the rider was okay, the route took us through St Andrews and then back into Melbourne. 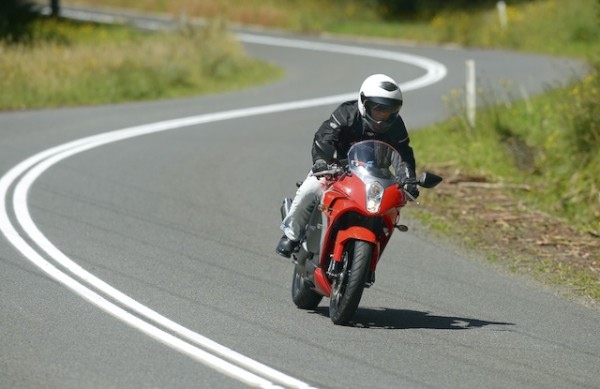 Quarter litres
So let’s start with the GV250, which is priced at $5490 plus on-roads. The cruisers are basically unchanged for 2013 aside from some minor decal stuff. The GV250 air/oil cooled vee-twins have EFI and are Euro 3 compliant, have 41mm chrome shrouded forks, low seat height, wide tyres and comfy ergonomics. Some of my taller colleagues commented on how roomy the little cruiser felt.
This little vee-twin absolutely flies along and I was generally able to keep up with the other bigger machines despite the small engine capacity.
Nice gearbox, comfy seat, 14 litre fuel tank it also has a 275mm semi floating disc up front and a drum rear but the braking package was quite adequate for this little performer. Optional extras are pillion backrest, rider and pillion footboards, saddlebags and windshield.

Next the GT250R, which continues to be one of the highest spec sports 250s getting around. It has the perimeter double cradle chassis with 75 degree air/oil cooled vee-twin featuring Delphi EFI, better suspension with the upside down KYB forks, twin 300mm discs up front and single 230mm rear. This is a very nice bike to ride. Good ergos, sporty feel and very much refined from the version I first tested back in December 2009.

This model also has new instruments and surround, new rider footpegs and a 17litre fuel tank. It also has some heavy duty tie-down points and digital instrumentation. Optional accessories include sports muffler (though the standard one sounds good), centrestand kit and tinted screen.

Big bores
Moving on to the 650s, the GT650R was Australia’s equal number one Super Sports bike (November year-to-date registrations) and was number one choice in LAMS bikes in that category. And it’s not hard to see why. With the improved performance and upgraded KYB suspension front and rear (the GT650R has adjustable compression and rebound). For a learner rider who wants to go for something bigger than the 250 this is a great machine to ride. Easy, comfortable, smooth, it looks even better with the new fairing and instrument surrounds. All the 650s in the range have the 90 degree vee-twin DOHC liquid cooled donk with the DELPHI fuel injection. The bore and stroke is identical across the 650 range with 81.5 x 62 as is the compression ratio of 11.6:1.

Seat height on the GTs is 790mm, which wasn’t daunting, even for my short legs, while the Aquila Classic is a very comfy 690mm and the Sport slightly higher at 705mm. The GTs have dual lateral oval bar frames while the Aquilas have perimeter cradle frames and the more cruisey Aquilas have a belt final drive as opposed to the GT’s chain drive. All the 650s have 17 litre fuel tank capacity except for the Aquila Sport with 16 litres. 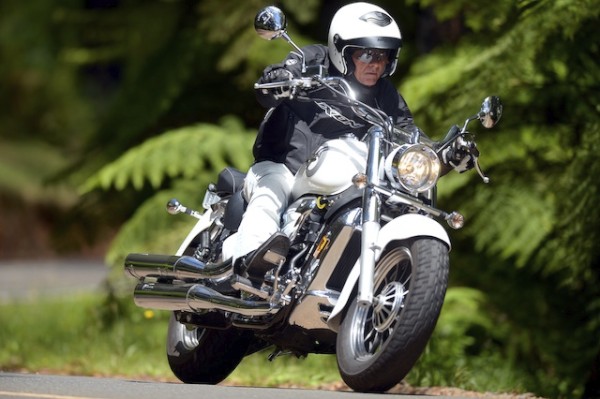 The GT650R has a sports muffler and tinted screen as option extras while the GT 650 has an optional sports muffler. The Aquila Classic has options including rear luggage rack, pillion backrest, engine guards, windshield, foot boards and panniers, while the Sport version has cruiser muffler, pillion backrest, engine guards, windshield and foot boards as optional extras.

The GT650R will set you back $7490 plus on-roads and the GT is $6990. The GVs come in at $7990. Of course, they all come with two-year unlimited kilometre warranty. All the 650s are nice to ride, have that lovely V-twin lilt, and enough power to be lots of fun. Of course the GT and GT-R handle better than the Aquila but that’s to be expected. Choosing between the three really comes down to what style you prefer. For me, it’s the GT-R. It’s light, loves the corners and the riding position for me was fine. Penzo’s last words

Going back to my opening comments about making a strategic decision on focussing on the LAMS market, Hyosung should continue reaping benefits in the small, but important, Australian market. Especially now that we have a universal LAMS regime in place across all states, thank you WA (you took your time!).

Hyosung should continue reaping benefits in the small, but important, Australian market.