OK, THIS is a first for a Cycle Torque Test. I have invited two other riders to offer their respective views on how they felt the 2013 Husky TC250R performed after a heated two days of hard core riding on a track that was perfect for testing the limits of a motocross machine.

The bike
Before we go any further let’s take a look at what is new of the 2013 Husqvarna TC250R and what we can see here is just an up-grade from the massively improved 2012 model but here are the facts: 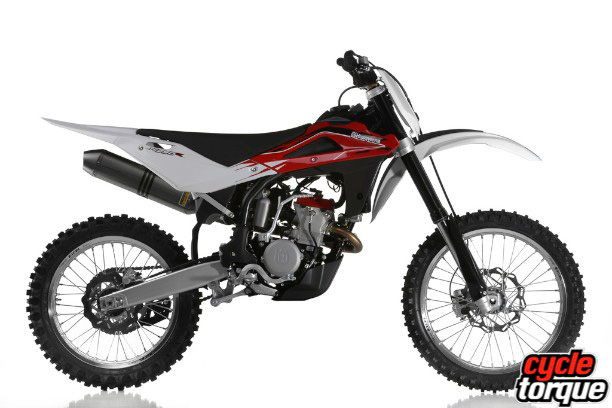 Strengthened Radiators: The new radiators are from a different vendor and feature additional capacity and bracing. They’re stronger and flow fluid more efficiently.

Magnetic Oil-Sump Plug: In another nod to durability, Husqvarna upgraded to a magnetic plug. Now all of those metal shavings go somewhere instead of cycling through the engine and wreaking havoc.

EFI Mapping: The EFI mapping was adjusted to offer a smoother power delivery in the bottom part of the rev range.

The Riders
Never have a more diverse trio of riders been combined to test one dirt bike.

At 87kgs and 172cm, Darren Smart. After 40 plus years of riding and racing dirt bikes I won’t find fault in the motorcycle that I am riding unless it makes me work any harder than I deem justifiable to do fast laps. I just want to ride as fast as I can without thinking about it too much, I hate compensating for poor handling, crap suspension, wobbly power delivery or dodgy brakes.

At 70kgs and 168cm, Joel Keenan is a 17 year old motocross enthusiast that has spent the last two years making the most out of a 2007 Honda CR125R and the reason why he is involved with this test is because not only is he a very good dirt bike rider he also has a very mature approach to his riding and racing with more than sensible opinions compared to most of the teenagers I have met over the last few years.

At 90kgs and 185cm, Andrew Bailey is in the 50 years plus range but is a former nationally rated motocrosser that has a gaggle of state titles to his name.

Andrew had been riding a 2010 Yamaha YZ250F for the last two years and has a very open mind as to what is right and wrong when it comes to smacking a dirt bike around a moto track. ‘AB’ is still riding way faster than what you would call ‘Vet Pace’ so he is the perfect person to let loose on the latest Husky.

The easiest way to get this right and readable is to segment each aspect of the TC250R so that each rider can offer their opinion so here we go, starting at the front and working our way to the rear, Smarty, Joel and ‘AB’ present to you the 2013 Husqvarna TC250R.

The ‘Red Head’ Motor
At just shy of 38 horsepower the TC250R is well behind the class leading KTM 250 SX-F that puts out the best part of 43 horsepower but let’s see what out trio of testers thought. 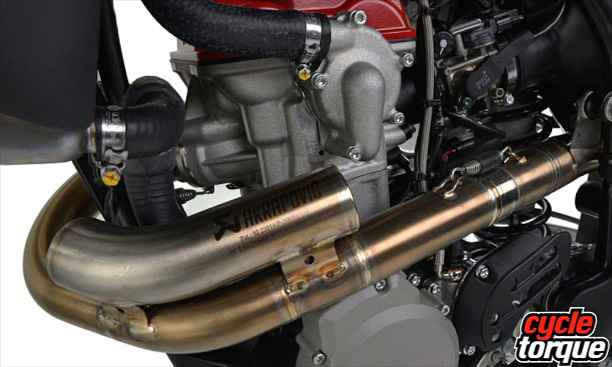 Smarty: I always chuckle when I think of the two very pro Yamaha testers who turned up at Queensland Moto Park for the 2012 TC250R test and quite openly told everyone that would listen that the Husky was quite a bit slower than the YZ250F.

Talk about egg on face! The 2012 and 2013 TC250R puts out a fraction more horsepower than the YZ250F and that is that! The Husky ‘Red Head’ motor is light, fuel injected and offers the hydraulic clutch and even though it doesn’t jump out of its skin when you pull the throttle to the stoppers it does offer a power delivery that allows the rider to do consistently fast laps without too many heart in mouth moments which in turn garners confidence in the overall package.

Joel: I found the husky’s engine to be well on par with other 250F’s I’ve ridden. On tight inside lines or small ’berms the “red head” engine had a responsive and tractable feel. Even when I cracked it on as hard as I could it wouldn’t hesitate, and the thing would just start to pull up to the midrange where it really hauls.

It’s the kind of engine that loves early shifting to keep it in the midrange where I found it would pull hardest. The power on the Husky just feels hooked up and rider friendly the whole way through the power-band (most beneficial at the end of a moto). With all that said the Husqvarna’s definitely not a slow revver! 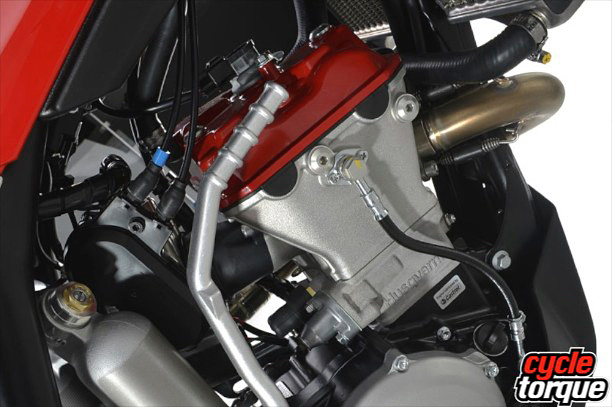 AB: I was impressed with the power delivery of the TC250, and I would be hard pressed to say either bike was faster, considering my YZ250F has an aftermarket pipe and has been re-jetted to suit.

The Husky was impressive straight off the showroom floor with the Accropovic pipe as standard equipment. The throttle response was everything I could hope for, with a light feel and instant response right across the rev range.

Kayaba Forks
We set the compression and rebound clickers at 11 out from hardest and put the fork to the test.

Smarty: I found that the fork offered a good top to bottom slide through the stroke without any spiking or bottoming. I rode through sharp edged stutters, cased out on the big triple and bashed my way through brake-in bump while hard under brakes without any harsh ‘smack-back’ through the hands.
I can’t ask much more than that from a set of fork so I give them the thumbs up. 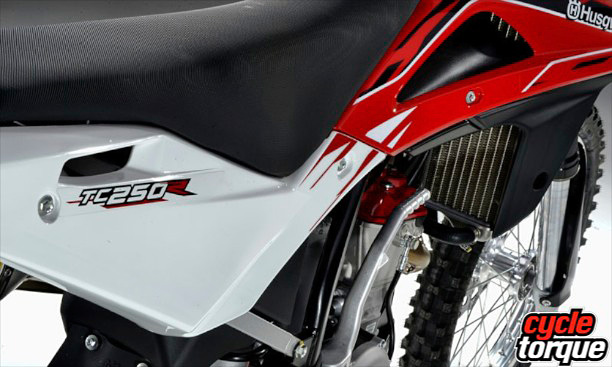 Kayaba Shock
We did the same with the shock and set the compression and rebound clickers at 11 out from hardest while we set the race sag for my weight at 100mm. In theory it should have been too hard for Joel and too soft for Andrew but they seemed to manage.

AB: I like my bikes to be balanced front to rear in the suspension, and the bike seemed perfect in that department with not a scary moment anywhere, the rear end hooking up through the whoops and stutters and consistent along a whooped up straight that swept around a corner to the right with no swapping going on as I drifted through the corner.

Braking
Brembo Brakes are the best but if the forks and the rest of the chassis don’t work in sync it can be dodgy when trying to brake deep into corners.

Joel: The brakes on the husky are just plain awesome. Braking hard into inside’s was a breeze. Once I knew I could trust them I could get on them hard and didn’t wash the front once. They were responsive and felt great throughout every moto.

Cornering
Tipping into a corner under brakes and accelerating out of a corner with full throttle is what we do a dozen plus times a lap, how does the TC250R fair?

Smarty: Aha, this is exactly where it can go pear shaped for the ol’ Smarty. I cannot stand a dirt bike that fights me on the way into a corner or that wants to punch me wide once I have pulled full throttle on the corner exit. 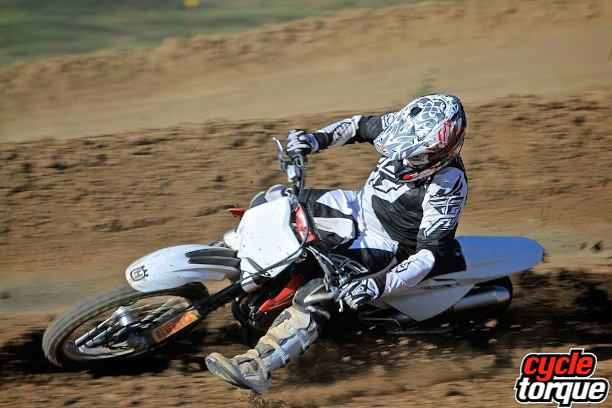 The track that we rode for the TC250R test had every corner scenario known to motocross and not once did I have to put myself into over-drive to get myself through a corner.

Actually, I found that the TC250R settled nicely into corners but I didn’t like running the ’berms with the Husky, I felt more comfortable diving to the insides and getting the bike straight as soon as possible for the drag race to the next corner, while on flat corners I felt more conformable rear wheel steering under power.

Ergonomics
While punching out laps a motocross rider has constant contact with his or her machine. It can feel as natural as pulling down your pants to pee or as awkward as trying to do a poo with your pants on while singing the national anthem at the State Of Origin in front of 50,000 people. Surely the TC250R sits in there somewhere?

Joel: I’m a little fella and I felt right at home on the husky. Standing, sitting or cornering the controls were always where I wanted them. Everything was in the right place on the TC250 I never felt uncomfortable.

Overall Confidence
This is the key, there is no such thing as the perfect dirt bike but when a rider is in the heat of battle or just busting out laps for the fun of it he or she must have a degree of confidence in the dirt bike they are riding.
Where does the TC250R sit in that category? 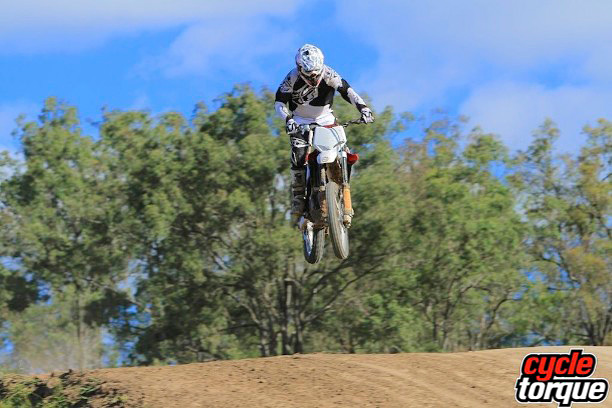 Joel: This is the most forgiving motocross bike I have ridden, the engine masked when I missed a shift or just plain wasn’t in the right gear. The chassis works well and is really complimented by the power curve of the engine. It’s light and more importantly feels light underneath you.

When I got out of shape it didn’t take much to muscle it back into line and could throw it wherever I wanted it to go on the track, the bike’s a pleasure to ride and gave me confidence to push harder.

AB: I am taller than Smarty and Joel so it is easier for me to get caught up on motorcycles with ‘stuff’ that isn’t in the right place. I didn’t even think of this while riding the TC250R so it must have been ok.

Would we buy a TC250R?
Smarty: At the tender age of 50 I find my needs as a racer a lot different from what it was when I was younger. Obviously I am no longer chasing glory at a national level but I still want to get around at a fair pace and I honestly believe that I would be more than competitive on the TC250R at any Vet or club event.

Sure, it is a touch down on horsepower compared to the KTM and KX-F but over a whole moto I think that the power and handling package of the Husky would put me in good stead to punch out good lap times right to the finish line and now that they are selling for just $8295.00 I would be heading straight to my local Husqvarna dealer.

Summary
Three riders with different styles, size, height and weight all taking a shine to the 2013 Husqvarna TC250R. All of Joel and AB’s comments were put into this test with no editing from me so what you are reading is what they wrote.

I have to thank Joel and AB for offering their valued opinion in the first ever three-rider ‘Super-Test’ for Cycle Torque magazine. I for one really enjoyed reading their opinion on the TC250R and I hope you, the reader got something out of this as well.

Hmmm, we could be on to something here. Let us know what you think.