The sense of fulfilment when the last bungee is strapped tight and the GPS is set to go. The final check; puncture repair kit, number 10 spanner, toothbrush. An instinctive ritual that ends with you climbing aboard your fully loaded ride, heading off into the sunset and its wonderful unknown. Can you do it on an electric motorcycle? 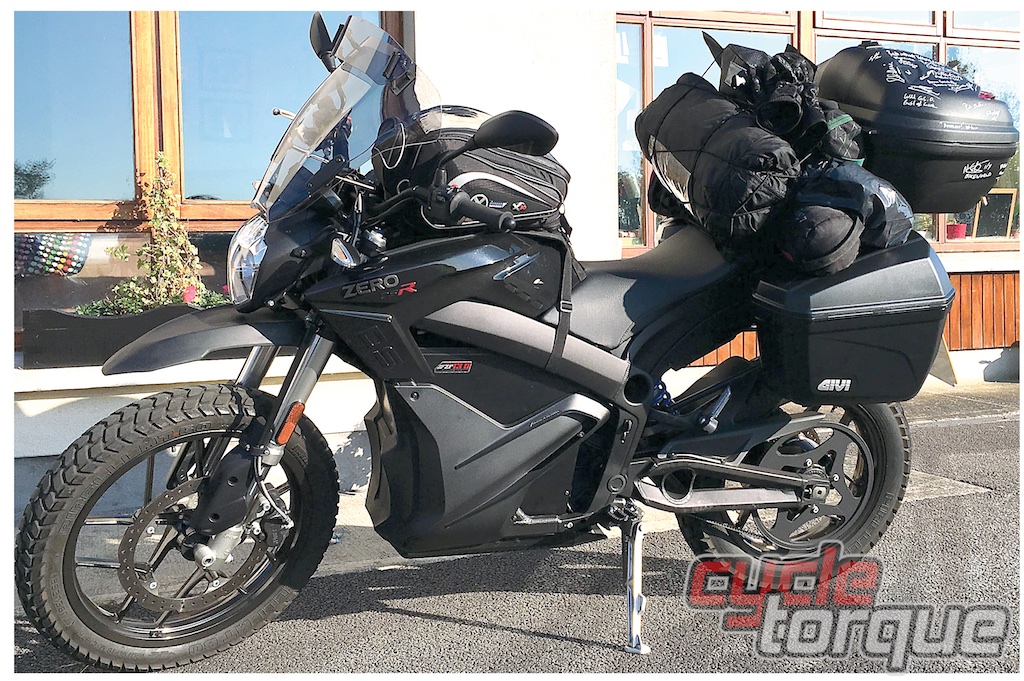 As the highway opens up before you, a sense of realisation sets in. The metal beast that you threw your leg over only minutes before is beginning to feel a little small in the vast wilderness of the freeway. “Maybe I should have gone with the litre bike instead of the 650?” You open the throttle and grin. That purring twin reaffirms just how well your little 650 can handle the journey. “No worries”

Now fast-forward to ‘the future’ and imagine this same scenario with an electric motorcycle. Oh go on. Just try and imagine it… Loading it up with tents, sleeping bags, that all-elusive toothbrush. Hitting the highway. You getting the picture yet? Nope?

Hell if that 650 felt small, how do you think you’d feel on an electric bike? We’re talking moped territory here? Right? Well… not exactly.

But touring on an electric motorcycle? Is that even possible? I mean, how far could you expect to travel? The range, the excessive charge times. Surely the extra luggage would sap the energy right out of that thing? Did I mention the range?

Doubts aside, touring on an electric motorcycle is here, and with a little careful planning, even with the standard on-board ‘slow’ charger it’s entirely possible to reach over 200kms in a day. Load up some fast chargers and this distance can be doubled or tripled. The reality is, current Lithium Ion batteries can take a lot of energy quickly and the typical electric motor has an efficiency of over 90%. Compared to the 30% of a petrol engine.

Loading the bike up does not affect the power as much as you would imagine. In fact, a fully loaded Zero DSR will still be capable of reaching 160km/h with no real reduction in performance. We need to remember that electric motors are torque machines. Pulling heavy loads is what electric motors were designed to do. Ever heard of a diesel-electric train? On a modern electric motorcycle you can expect torque figures in excess of 100Nm. So go ahead, stick on a set of panniers, add a passenger. It’s still gonna pull harder than that 650, even on an incline.

Remarkably, the efficiency is not affected as much as you would imagine from the extra weight. You won’t be forced to travel at 50km/h to reach 60km distance. A more realistic figure would be 100kmh for 120km. OK, so it’s not BMW GS territory but if there’s no real rush it’s entirely possible to undertake medium-range touring on an electric motorcycle. About 200km a day.

Charging electric is all about opportunity. On any typical motorcycle tour, you might ride for an hour and then take a break. Maybe it’s a stop for breakfast or to visit a lookout. The trick is to charge when the bike is stopped. You would be surprised where you will find power outlets. So an hour for breakfast or wandering around an historic ruin is also refuelling time. We need to remember that it’s 1000 times more likely to find a power outlet than a petrol station, wherever you stop. Most coffee shops, restaurants and services will have power readily available. You just have to ask nicely.

So when it comes to range, the mindset of empty vs full needs to be shifted. Lithium Ion batteries have no memory effect. This means that they like to be connected to power, anytime, anywhere. Ride, find an interesting place to stop, find a socket, walk away. By the time you return to your bike you’ll have more (free) km’s in the tank.

What’s more, the range on an electric motorcycle is very predictable. It’s really easy to estimate distances given the current riding style and conditions. Feeling a little better about that range anxiety yet?

But where could you go for a typical weekend? One example might be a leisurely camping trip to Newcastle from Sydney. Ride to Lake Macquarie on a Friday after work. Pitch your tent on a powered site at the lake shore. Charge the bike and relax for the evening. Cruise into Newcastle the following day, catch up with mates and visit some beaches. Charge the bike overnight and then ride back to Sydney. No worries!

If distance is your thing then it’s entirely possible to increase your range through fast charging. A typical electric motorcycle comes with approximately 10kWh (kilowatt hours) of battery. The on-board charger is roughly 1kW (kilowatt). With this configuration charging from Zero to 100% would take 10 hours. Whoa! Remember that opportunity charging we talked about earlier? Starting to make sense now, eh?

A household wall socket can handle a maximum of 2.4 kilowatts. That’s 240 volts at 10 amps. Any more and we start tripping switches and frying cables. For this reason most electric motorcycle riders will carry about two kilowatts of chargers onboard. Maxing out a wall socket will give a charge time of around five hours. The fastest charger that can be fitted to an electric motorcycle is about 9kW making it entirely possible to charge the bike in just over one hour. With these kinds of numbers we’re much closer to the type of touring that allows you to maintain your iron butt status.

So if trying to pull 9kW from a regular power socket is not an option, how can we decrease the charging time?

Fast charging requires infrastructure. What’s currently available is a combination of ChaDemo (fast DC charging), Level 2, using the SAE J1772 port and Superchargers, which are used for Tesla electric cars. These devices will pump out an eye watering 120 kilowatts of energy. Plug your bike into one of those suckers it will be fully charged in 12 minutes. Thats about the average time a person spends at a petrol station.

The same… but different

Touring on an electric motorcycle is neither the same as traveling on a large motorcycle or different to touring on a small motorcycle. Electric is capable of high speeds and carrying a lot of weight yet the distance that can be travelled is affected by the speed, charge time and range. On a small motorcycle there is a tendency to avoid freeways and on a large motorcycle you look for a route that has sweeping bends and high speed thrills. With electric you want both of these which is a combination that creates a new paradigm in touring and new rules apply. On a short journey you can ride as hard as you want but on the longer stretches you need to relax on the throttle.

All this requires you to be aware of energy storage and density. The rider experiences the joy and precision of using electric power to carve up the twisties while learning the skill of maintaining efficiency and as a result becomes acutely aware of energy use.

The cost of progress

Touring on an electric motorcycle feels a little like cheating. You get all of the experience of riding a motorcycle but ironically, the more your ride it, the less it costs.

There is something to be said about travelling home after a 1000km tour and realising you did not spend a cent on fuel. Not factoring fuel costs into a journey is a pleasant surprise.

The initial outlay on an electric motorcycle is expensive, but owning and running one is incredibly cheap. In many ways, the cost of electric is an honest price, without any hidden extras. No servicing, no petrol.

They are exceptionally reliable, with an average battery pack guaranteed to last in excess of 500,000km’s. No! That’s not a typo.

Touring on an electric motorcycle is closer to reality that many of us would care to admit. How much preparation time goes into servicing and maintaining our petrol bikes before (and after) a journey? How many km’s do we really ride in a day? Go on, be honest!

But it’s the future, right? Well, let’s end with some words of wisdom from Science Fiction author William Gibson.

Italy. No tour bus. No stinking hire cars. No plans. Just cool bikes, like it should be. Thanks to HP Motorrad […]

We took around 30 Cycle Torque readers to Vietnam and brought back this video of the Tour… Read the full story in the forthcoming May 2014 issue of Cycle Torque.

FROM the chaos of bustling city streets to the incredible serenity of the mountains, from gaudy displays of wealth and bling to the incredibly poor countryside, from a war-torn past to a blossoming future, Vietnam is an incredible country. […]