DUCATI was the first manufacturer to really put a sportsbike engine into an adventure or all roads machine.

Using a slightly detuned engine from the 1198 Ducati was a masterstroke. For the first time you had a bike which was comfortable but had so much stomp out of a corner it was almost ridiculous. 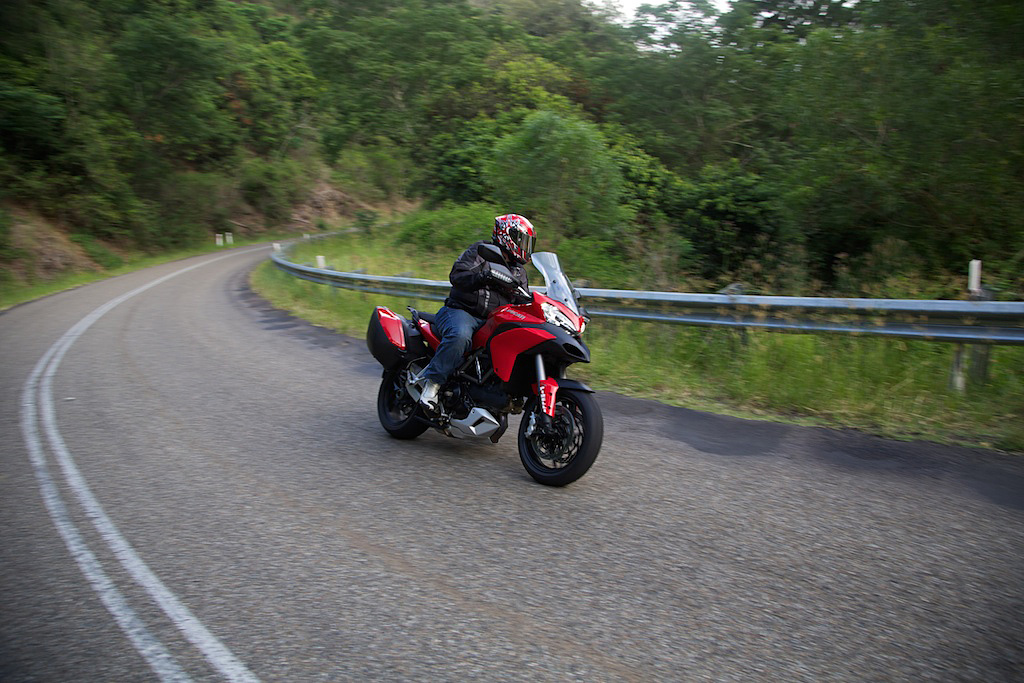 On a winding country road there are not many bikes which could hang with the Multistrada 1200 if it was being ridden hard. And with 150 horsepower on tap you can ride this bike hard!

And any hang-ups potential buyers had about the old Ducati reliability nugget or servicing costs were plain incorrect. With 24,000 kilometre major service intervals the big Multistrada became maintenance friendly.

The factory did this by improving thermal efficiency and a change to better valve seat material. There are now plenty of these running around with serious kilometres. In fact Cycle Torque owned one of the first Multistrada 1200 S Touring models and we rate it big time. 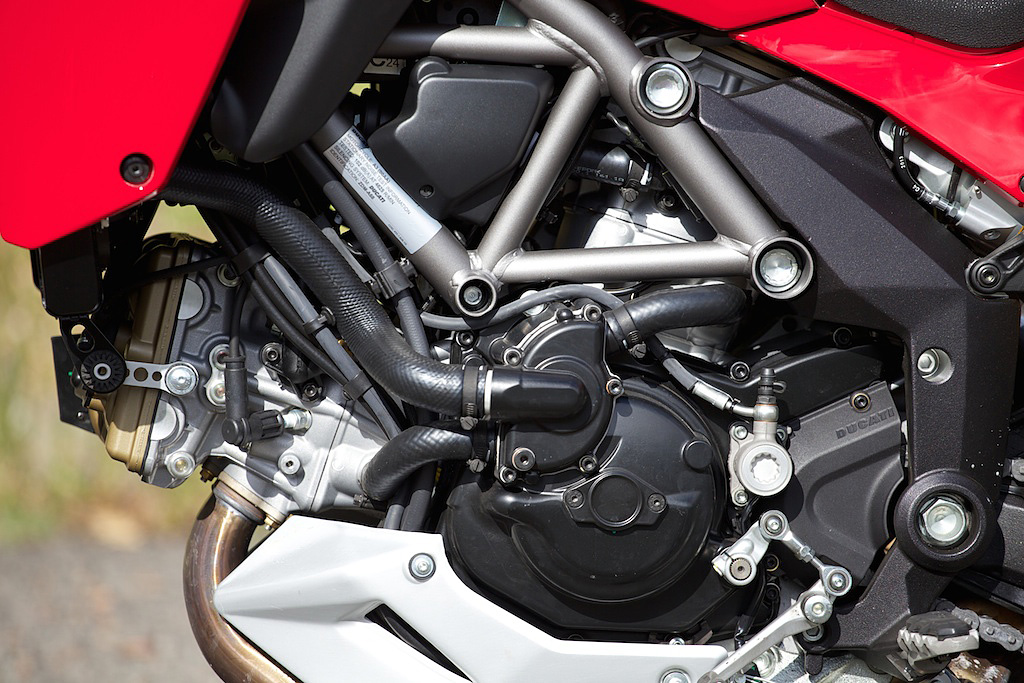 Fuelling on the first model was a bit of a bugbear, but you sort of had to expect that in a bike which had an engine made to run like the wind but was really designed for slower action, including dirt. That seems to have been sorted in the new model, which was also one of the first mainstream motorcycles to have semi-active suspension.

Skyhook That’s what Ducati calls its Sachs built semi-active suspension (DSS) set up on the new 1200 S Touring as tested here. It’s like you are suspended from the sky by wires says Ducati. Of course the reality is different, and you’d want it to be.

Imagine trying to ride fast without any feel from the bike. Not cool. It works by using a number of sensors on the bike which determine how you are riding and what sort of road conditions you are experiencing, and then altering the suspension to suit. 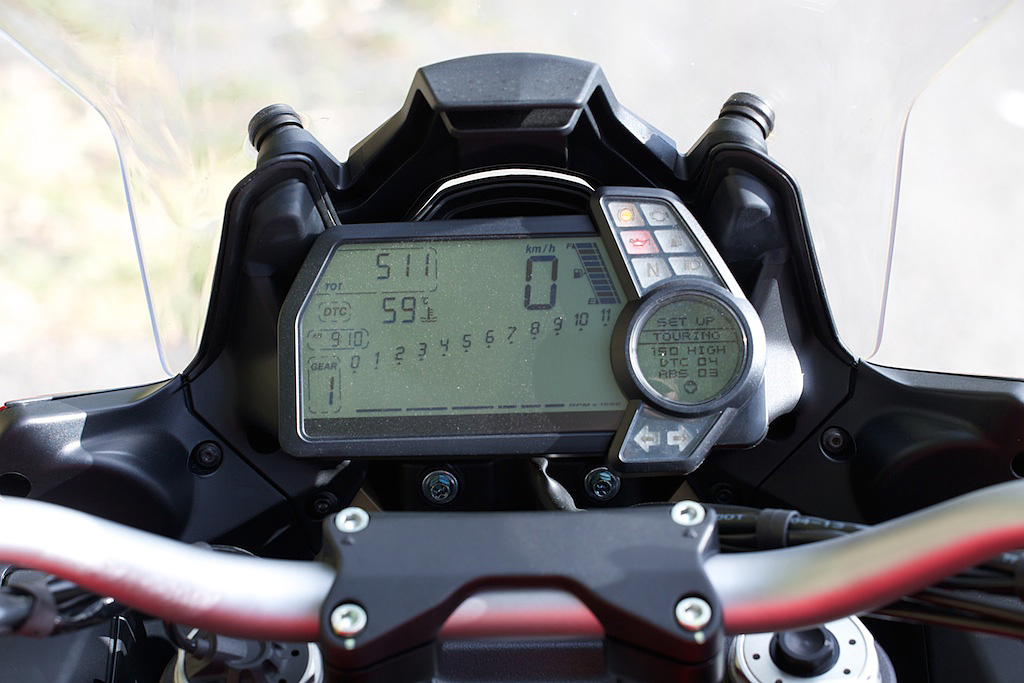 Ride aggressively and it will firm things up accordingly. Ride in cruise mode and the electronic brain on the 1200 S softens it up. The ECU is constantly evaluating what’s happening and changes the bike to suit.

There are three riding modes – Urban, Sport, Touring and Enduro. Each mode has its own factory suspension or default settings.
For example, select Touring mode and you will have full power up top, slightly softer power on initial throttle opening, and the suspension softened.
Sport gets full power all the time, and firmed up suspension settings. 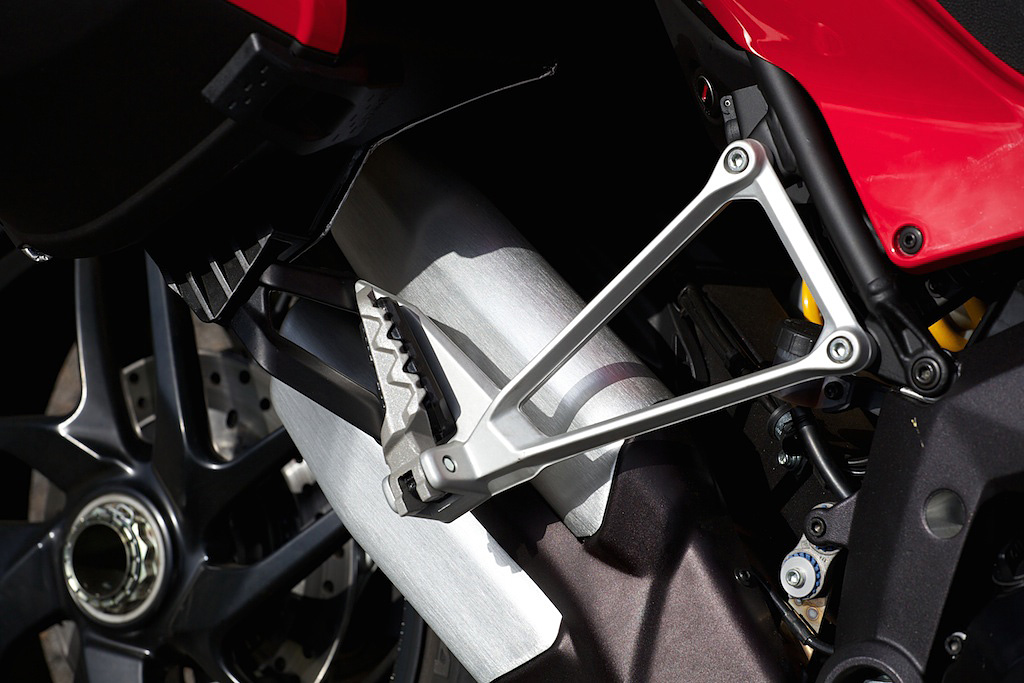 You can also easily change the electronic suspension pre-load to suit whatever is being put on the bike. Two-up with luggage? No probs, sorted in 30 seconds if that.
ABS settings are also modified to suit whichever riding mode you are in.

This is one of the most technical bikes Ducati makes, because if that isn’t enough for you – it would be for most riders I reckon – you can get further inside the bike’s brain to specifically tailor the riding modes, the 8-level traction control (DTC) and suspension settings. It takes a little getting used to but is quite easy when you know how. 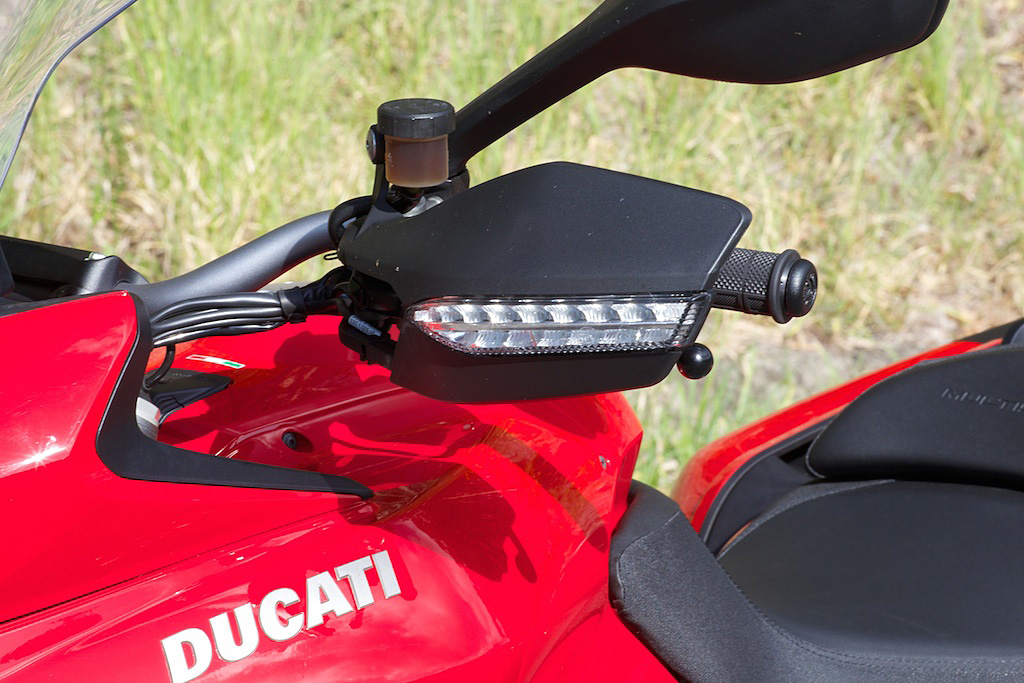 On the road
Like the earlier Multistrada models, even the first 1000, the rider sits closer to the controls than most of these types of machines and the pillion seat sits about an inch higher than the rider’s seat so you get ‘locked’ in to the riding position somewhat. There’s a real racey side to the Multistrada 1200 S so the racey style seat fits the bill.

A new taller and wider windscreen has been fitted to the latest model and there are plenty of accessory sizes available if this doesn’t suit your height. Adjusting it is easy too, even though it’s not electric. You can move the screen with one hand while you are on the move. 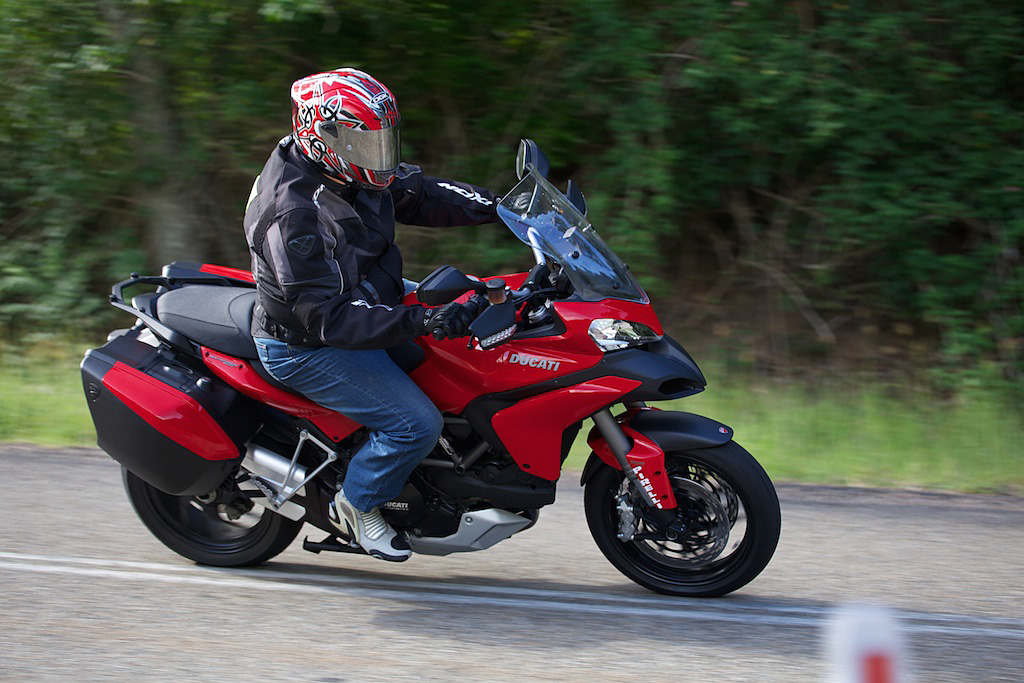 The Touring model as tested comes with colour matched panniers with a total of 58 litres of capacity. You can also get a colour matched top box, which like the panniers, locks in place and detaches from its clever mounting points in seconds, no cumbersome frames and ugly brackets to spoil the Multistrada’s sleek lines.
We put clear plastic on the tops of our panniers to stop scratches from errant boots as you get on the bike.

Starting the bike is always a fun affair, as the battery turns over the big high comp V-twin engine. When it’s idling you know it’s a serious motor. It revs quick and has incredible stomp off the bottom.

Even in Urban mode the bike likes to climb over its rear sprocket. This is with a little provocation of course but the engine likes to get over the 3000 rev mark before it feels ‘happy’. In my experience the previous 1200 liked around 4000 rpm before it smoothed out. 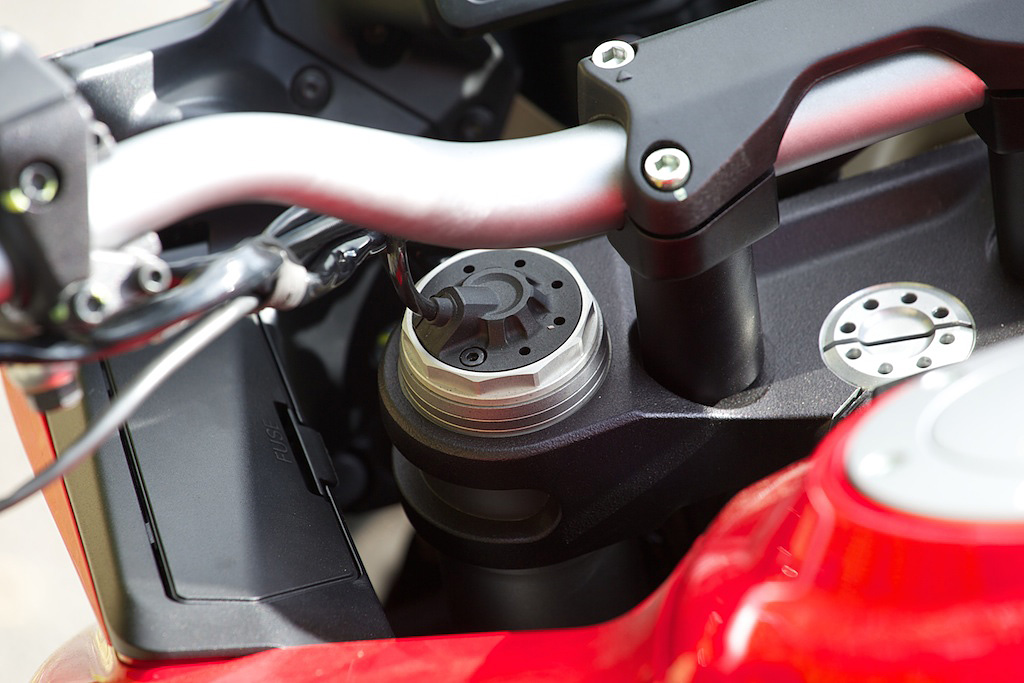 The fuelling on the latest 1200 is much better. But remember what’s lurking inside that chassis. It’s like a bloody racehorse. It doesn’t really like going all that slow. It’s a little bit cranky in full power mode but it’s a real nice cranky.

When you slot the bike in Enduro Mode it might make you want to start doing single track but this would be pure folly. The bike is simply not designed for that style of riding.

Dirt roads through the Snowy Mountains or fire trails to a camping spot sure but start asking too much of the bike and the standard Pirelli Scorpion tyres in off-road situations and you are asking for scratched bodywork. 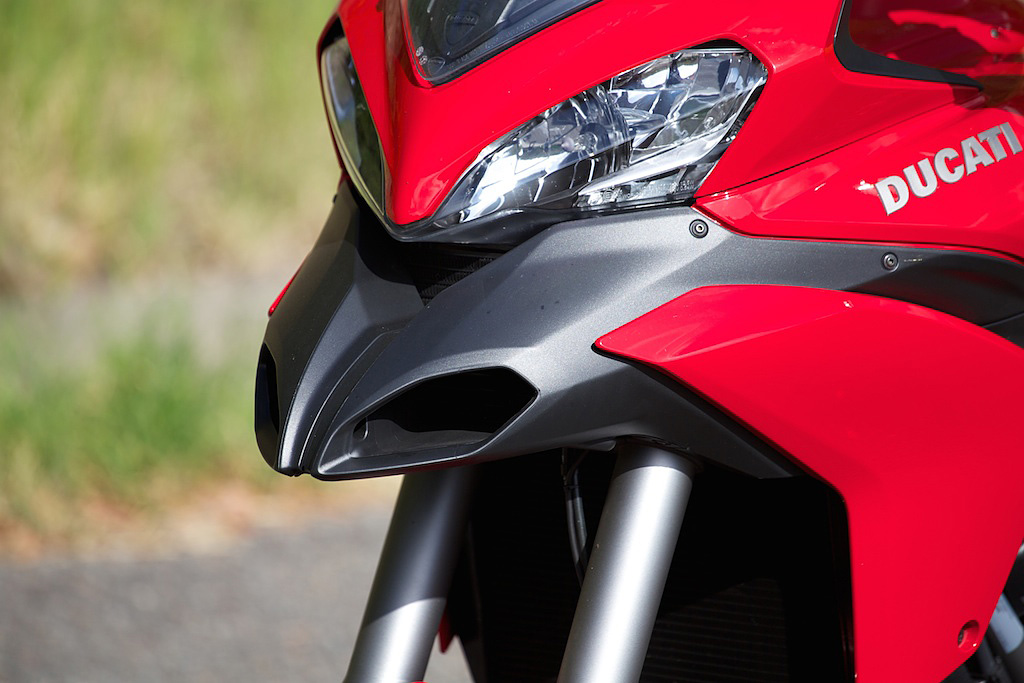 Multistrada means Many Roads in Italian, not No Roads. And to be fair Ducati doesn’t market this bike as a serious adventure bike.

The Skyhook suspension certainly gives a different feel than normal telescopic suspension. It soaks up road irregularities with ease and when touring along it works beautifully.

It can be slightly disconcerting the first time you dive into a corner hard under brakes though. You expect the front end to dive but the DSS 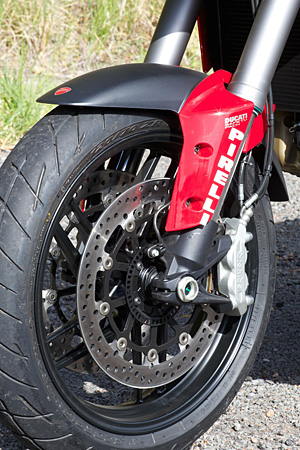 reduces this so at first you get a vague feeling from the front.

But this is more the rider’s brain working overtime to work out what’s happening. The suspension is doing its job. That’s what’s happening. A few kilometres of this and you get used to how the bike behaves in these situations and once you get the confidence in it you’ll be fine.

Should you buy one? The bike retails for $28,490 + on road charges, in S Touring form, and this comes with the Skyhook suspension, four riding modes, adjustable traction control and ABS plus panniers and centrestand, and adjustable three-level heated handlebar grips.

That’s a decent amount of coin but you are getting one of the best all-roads bikes on the market.

Entry to the Multistrada family starts at $22,990 + on road charges but for that you don’t get the Skyhook suspension, panniers, centrestand and heated grips of the S Touring version.

On power alone not much can touch the bike, it’s on the edgier side of the all-roads market segment. If your adventure riding or touring consists of lots of fast road work then the big Multistrada will suit you.

Is the Himalayan the best thing to happen to Adventure bikes in decades, or just the ugliest bike available today? […]