I’LL say right here and now that the 899 Panigale is my new favourite Ducati. I’m the first to admit I’m a bit of a Ducati fan, currently owning three of them, but that doesn’t mean I think every Ducati ever built is a great bike. 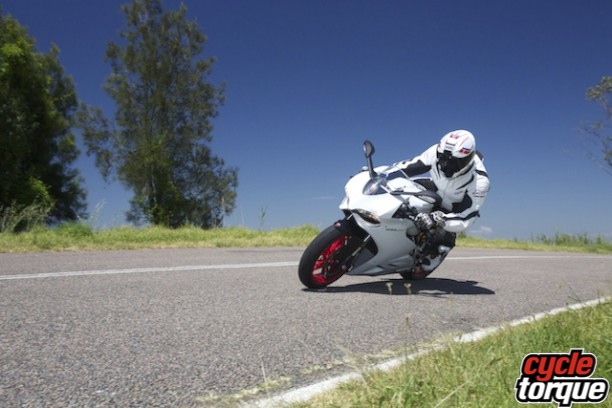 What I like about the 899 Panigale is the way the bike works as a whole. It’s this bringing together the right bunch of parts which make this bike special.

The beauty goes way deeper than its gorgeous skin. It’s sort of like a supermodel who will play a game of cricket on the beach without worrying if her makeup is right, or her hair is done to perfection. Two other Ducatis spring to mind when I think of ‘the bigger is not always better’ aspect of bike ownership.

The first is the 650 Pantah back in the 1980s. I remember nearly buying one from Action Motorcycles in Sydney when I was in my early 20s but no, I had to go for the 900 Darmah with a questionable service history because I thought bigger was better. Big mistake, I can tell you. I was broken down and broke in no time, while the Pantah owner was most likely enjoying his reliable and sweet ride.

Not anywhere near as bad is the relationship between the 1098 and 848 Ducati of a few years ago. Both awesome bikes but I just found the 848 a nicer bike to ride. It had plenty of power and was the same physical size as the 1098 but for some reason I just preferred the smaller bike. 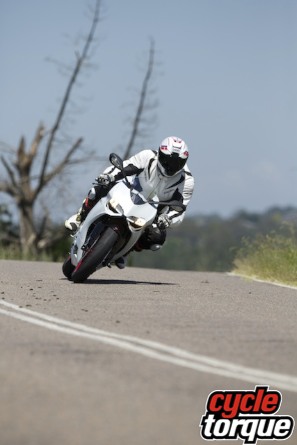 In the store
The first thing to make note of is this bike replaces the 848 EVO but it is not related to the 848. It would most likely share about zero parts.

It’s built on the same platform as the 1199 Panigale but there are a number of differences. I don’t really want to compare the two bikes as such but to show prospective buyers the main differences.

The Superquadro engine has a much smaller bore/stroke ratio than the 1199, 12mm on the bore and 3.5mm on the stroke near enough. The 899 engine certainly likes to rev.

There are other powertrain differences. It doesn’t have a slipper clutch as a start, but it does have the adjustable (3-levels) Electronic Braking Control (EBC) which feeds small amounts of fuel to the throttle bodies to help prevent rear wheel lock ups under hard braking. The throttle bodies are smaller on the 899 too.

Like its bigger muscled sibling, the 899 has 24,000 kilometre major service intervals. It also uses what Ducati term a ‘Protrusion’ system which works with the camshafts to act as a ‘decompressor’ to help start the engine allowing a more compact / lighter battery.

The 899 engine is definitely easier to start than earlier 848/1198 engines. It simply spins over quicker. On the chassis side it’s very similar to the 1199, using the same monocoque-style alloy front frame which is mounted to the engine.

The Panigale family is quite different to the 1198/848 family it replaced. The earlier machines had a steel trellis frame which used the engine as a stressed member and had everything bolted on to it.

The Panigale’s engine is basically the frame, and everything is bolted to that. A reversal if you like. The 899 gets a steeper steering head angle (by 0.5 degrees, now 24) and the trail is 4mm less.

The main visual differences is the dual sided swingarm, whereas the 1199 has a single sided swingarm which has been a staple part of the Ducati sportsbike range almost 20 years now. The swingarm is just one aspect/example of the overall 899 design approach which was to make it both more price accessible, while also more usable as an everyday street bike and mid-capacity Ducati Superbike.

At the moment you can only buy one model of the 899, whereas you can buy three of the 1199. This will possibly change in the future but one thing the factory would change is the suspension, although for most riders on the road any updated suspension would have to be pretty bloody good to be better than what’s on there now.

43mm Showa Big Piston Forks are fitted and they have all the usual adjustments you will find on a machine of this quality. A gas charged Sach shock is fitted and the story is the same there re adjustments.

According to Ducati the rear shock has a non-adjustable link which is better suited for road riding and it’s a rising rate set-up. It’s also side mounted like the 1199.

Other differences between the 899 and 1199 include a more basic instrument package (black and white display rather than the full colour TFT on the 1199), and it comes standard with a quick shifter (DQS), three RbW (Ride by Wire), or ‘power’ modes which integrate with the three stage ABS and 8-level traction control (DTC).

It weighs a scant 169 kilograms. One other interesting point is the bike has a 17 litre steel fuel tank rather than an aluminium one the 1199 uses, and the smaller capacity nylon tank used on the previous 848/1198 models.

On the road
This thing sounds very angry when you start it, much different to an 848 engine, but then again, as I said earlier the two engines are unrelated in design. I stand at six foot and I found plenty of room on the bike, even though it looks quite small sitting on its side-stand.

It does like a bit of throttle to get moving from a standstill but once underway feels wonderful as a package. I didn’t feel cramped on the bike which surprised me a bit, and the fuelling was great, something that has been an issue with a few 1098/1198s I’ve ridden over the years.
It’s all about the fuelling set-up, and the 899 I rode was spot on.

Flicking up through the gears using the quick shifter was easy, not the best quick shifter system I’ve ever used but right up there. Now part of that is the engine too. I’ve found quick shifters seem to like big capacity four cylinder engines to work seamlessly, and the 899 engine is a thoroughbred which is a little cranky, but cranky in a good way if you get my drift.

And this is road riding I’m talking about, where you are not revving the freckle off the engine. Put the 899 on the track and you wouldn’t know what I was talking about. Overall though, the quick shifter and gearbox are very hard to fault.

Power? Well there’s plenty of that on hand, and like I said earlier, it’s usable. At one stage just for the hell of it I let the bike go down to 70km/h in top gear and wound the throttle back on.

No chain snatch or carrying on, the 899 just pulled away as sweet as you like. I was impressed with that. Top speed is closer to 300km/h than it is 200km/h.

The three power modes are Wet, Sport and Race. Going between the three is easy via the left switch block and this can be done on-the-fly without stopping. Like pretty much all other power systems, the power and power delivery is increased as you go ‘up’ through the modes.

On the 899 the traction control and ABS and EBC is automatically adjusted to suit the power mode. You can also get inside the system so to speak to adjust the system to suit you personally.

On the road I found the system fine and wouldn’t bother adjusting it from the default settings but track riders might wish to delve into the bike’s brain.

Yes it handles extremely well, but the next thing which made me smile was the way the suspension handled some of the bumps I encountered. Both the forks and shock are supple enough to cope with reasonably sized hits but still work extremely well at speed.

This bike will not cripple you on rough roads if you find yourself on them. Ducati and the suspension manufacturers should be commended for the 899’s settings, they work in the real world. A refreshing change, and one which proves it can be done on a sportsbike.

Verdict
I think one of the 899’s biggest competitors for sales will come from Ducati’s own 1199 Panigale. Both are very fantastic machines for a variety of reasons, not just from an engineering point of view but also rider/owner satisfaction.

Changeable weather played a big role in the 8th WSBK round’s race day at Portimao’s Autodromo Internacional do Algarve. This year’s Portuguese races were held in opposite track conditions and saw different podium finishers in […]