You always tell the truth when you’re drunk.

So here I was – traffic lights in the centre of Sydney on a Saturday night sitting on a brand new Tuono riding home from a movie.

A young guy walks out of the pub on my left, crosses the road and stops right in front of me. He turns, points at the Tuono. Three calm words. 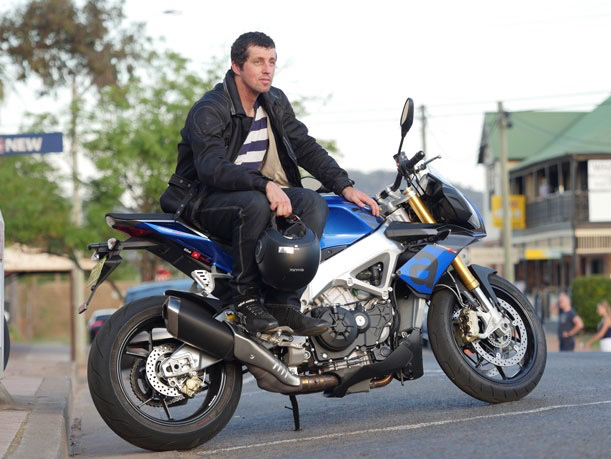 About a decade ago, almost every manufacturer started producing a naked version of their premier sportsbike – mainly because sportsbikes were becoming so, well, sporty.

Over the years the Tuono has evolved and built itself a cult following, with the Italian factory being one of the pioneers of blurring the lines between streetbike and sportsbike.

If you are reading this test you would also be aware of how competitive this class of bike has become – every manufacturer has to bring their ‘A’ game… so for this Tuono iteration Aprilia bumped up the capacity to 1077cc, which means a power increase from 170 to 175bhp.

Instead of fitting an RSV4 engine, Aprilia bored out the previous Tuono unit by 3mm and made some internal changes.

Aprilia’s racing ABS is also fitted and all of the settings are adjustable from the handlebars (even on the fly) – there are a lot of configuration options, but they are easy to use. 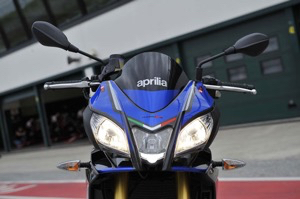 Other changes include tweaked styling around the headlights and a redesigned seat (I will get to that later).

This was motorcycle heaven – for the track test it was Tuono verses RSV4 at Sydney Motorsport Park – happy days!

I have spent a lot of time on naked streetbikes lately, and I found the Tuono so easy to get comfortable on. I put this down to the engine characteristics more than the riding position – the throttle response and gear ratios were much more forgiving – I didn’t have to think as much to have fun and go fast.

With 121Nm of torque on tap, the wheelie control can get a workout. It has three settings and even on the most restrictive, it still isn’t abrupt.

There are three different engine maps to try, and they offer varying levels of power output and engine braking. As well as ‘track’ and ‘sport’, you can now select ‘race’.

On the track, the increased horsepower means there is a really usable sweet spot of torque. The fly-by-wire throttle also has a natural feel – and like the RSV4 – when you are dealing with such high output engines, top level electronics make these bikes so much fun.

Suspension on the RR model is provided by Sachs front and rear – with 43mm USD units up front. All are fully adjustable as you would expect – and I was particularly liking the feeling from the rear, nice and stable with lots of confidence.

Braking is handled by a pair of Brembo monobloc calipers with 320mm discs – excellent performers as you would expect. 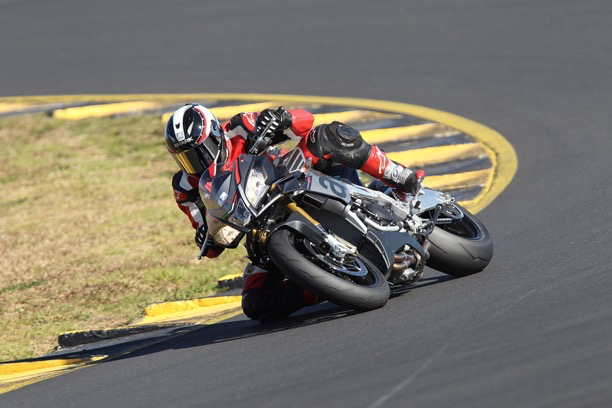 Around the street the Tuono shines, just like you would expect.

It’s not just the easy riding position, compared to the RSV4, it is just more practical in the low RPM range – the power comes on nice and smooth for riding around city streets.

I took the bike out on several longer trips to really appreciate the higher ’bars… but something I also noticed was the redesigned seat.

It still feels reasonably high (even though it is 15mm lower – maybe it’s the hump on the pillion seat?) but it feels long – which means if you are taller, (I’m about 6ft) it makes for a more comfortable ride, especially if the roads get twisty (as you would hope!)

Don’t get me wrong, we all know some comfort has to be sacrificed for this level of street cred, so if you need total touring comfort you might want to look closer at the Caponord.

On the rougher country back roads the handling and overall geometry of the Tuono is superb. Again, the rear feels so stable and the steering damper takes care of any shakes. All in all, on average crappy Australian roads, the Tuono is rock solid.

Like on the track, the midrange is absolutely cracking. That addictive surge of power is complimented perfectly by the brakes – confidence all round. Just as addictive is the sound of this V4 – it has an awesome growl even with the stock exhaust.

There’s an app for that

Yes that’s right, you can change the settings on the Tuono using your phone.

Not only that, but you can also adjust traction and wheelie control depending on where you are on track – using your phone’s GPS.

Round that out with another tool that analyses your lap times to find ways to improve and it is all starting to sound very MotoGP. Except it’s at home. Crazy.

The Tuono V4 1100 is available in two versions – the RR (Portimao grey and Donington blue) and the V4 1100 Factory (in Superpole graphics – very cool). The Factory version has upgraded Ohlins suspension.

This is the question which I am sure many people get caught up in: which Aprilia would you buy?

When ridden side by side they are two bikes with a very distinctive focus, and I think it would come down to how much time you expected to spend on the track verses the street.

They are both stunners to look at – and they sound amazing even with standard exhausts.

The short story is: the RSV4 was way more fun on the road than I expected – and the Tuono more than holds its own on the track.

(Sorry…I haven’t made the decision any easier, have I?)

Whichever way you look at it, these are “that’s f***ing awesome” kind of bikes! 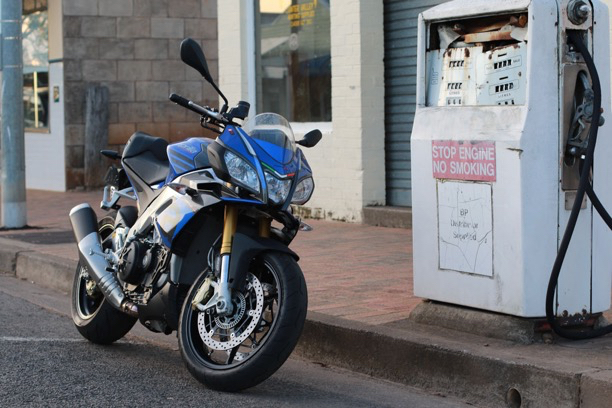