Matthew Walters is a late inclusion in the Swann-backed world superbike round at Philip Island from February 20-22, joining fellow Aussie wildcard Jed Metcher on the 25-bike grid.

The 22-year-old will ride a Pedercini Kawasaki ZX-10R, reuniting with the team that offered him a WSBK seat at the 11th hour in 2014 — but the association didn’t last the distance after Walters crashed heavily in Saturday practice and was a subsequent withdrawal.

This time, he’s obviously hoping to last the distance and reward the team with some quality results.

“Lucio (the owner of Team Pedercini) gave me a call, and it just went from there,” Walters said.

“I am grateful for the opportunity, and the good thing is that this time I will have two days testing on the Pedercini Kawasaki before round one kicks off – something I didn’t get in 2014.

“I am looking forward to the challenge, as it’s always great testing yourself against the best in the world. A top 15 result would be unreal in such a competitive grid.”

Walters was originally awarded a WSBK wildcard by Motorcycling Australia, but after recent testing promptly withdrew citing a lack of competitiveness from his locally prepared ZX-10R. The timely overture then came from Lucio Pedercini, with a one-event deal consummated on February 7. 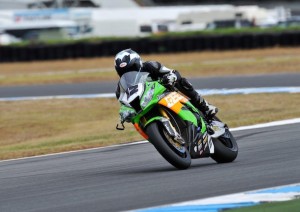 Walters’ teammate will be Spaniard David Salom, who is receiving direct assistance from the Kawasaki factory in 2015.

Metcher will also ride a ZX-10R at Phillip Island, with the two Aussies and 23 internationals to take part in an official world superbike test at Phillip Island on February 16-17 as a final pre-season shakedown. On February 20, practice for round one begins in the build-up to Sunday’s two 22-lap races.

The 25 riders at Phillip Island will be spread across eight different manufacturers –Aprilia, BMW Motorrad, Ducati, EBR, Kawasaki, Honda, MV Agusta and Suzuki – with Frenchman Sylvain Guintoli to begin his title defence on a Honda.

Troy Bayliss will also return with a host of Australian greats of motorcycle racing for his Baylisstic Scramble dirt bike extravaganza on the new flat-track being built behind Lukey Heights.

Staring to race in World Supersport!

Australia’s former MotoGP rider Bryan Staring will compete in the 2014 Supersport World Championship on a Honda, beginning his campaign at Phillip Island next weekend, February 21-23. […]

Kawasaki rider Tom Sykes has converted excellent qualifying pace to a race win and second place overnight at the Dutch WSBK round. […]

Organisers of the opening World Superbike Championship round at Phillip Island have added ArenaCross to the three-day event, held February 21-23.
[…]