MOST readers interested in sports bikes would already know that BMW’s S 1000 RR is very much at the pointy end of the field. Like its competition it’s extremely powerful and handles well.
You could say the new HP4 is the race version of the sports S 1000 RR.

The interesting thing is you would expect the HP4 to be even sharper and harder edged than the ‘cooking’ S 1000 RR, but BMW has not only made it a better track bike, it’s made it a better road bike too.

How so you say? It’s all in the Dynamic Damping Control (DDC), a fully-active suspension system that adapts on the fly to the HP4’s selected riding mode (Rain, Sport, Race or Slick) road conditions, and your riding style. 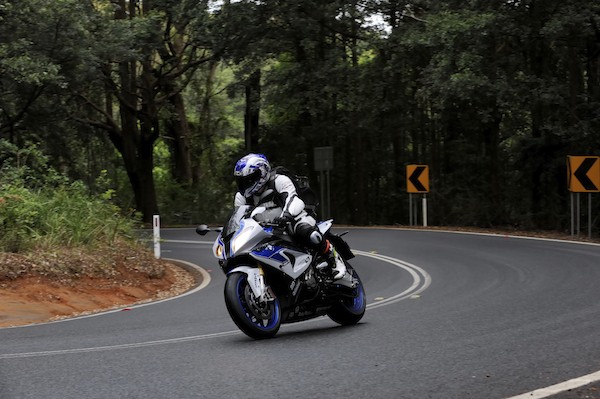 A bike that thinks

When the S 1000 RR was updated over 12 months ago and wasn’t due for another one just yet, so the decision was made to create an up-spec S 1000 RR, with a HP moniker. BMW’s other HP models – this is the first four cylinder BMW to carry the HP tag – have been pretty special so the bike needed to have more than some carbon bling and flashy stripes.

The aim was to have the HP4 one second quicker than a standard S 1000 RR on any given racetrack, but better on the road, therefore the HP4 gets lightweight wheels for quicker direction changes, quicker acceleration and better braking performance, tricker Brembo front brakes (with IDM ABS settings), and the street legal titanium Akropovic full exhaust system.

The HP4 still has the same peak power as the standard machine (193hp at the crank), and slightly more midrange, but it’s around eight kilos lighter, which is where a decent chunk of the one second a lap quicker comes from.
Active suspension has been around in cars for some time now but it’s never really made it’s way on to mainstream motorcycles.
Ducati’s Multistrada 1200 has the ‘Skyhook’ suspension which is very similar in concept, but for different reasons BMW sought to put it on its premier sports bike before it goes on to other models in the range.

There’s various ways to make suspension fully-active. Some systems do away with springs and according to people who know more about it than us it generally uses electricity to change the oil viscosity which in turn changes the damping. Of course there would be much more to it than just that.
The HP4 system uses springs front and rear, and the ECU changes the height of a needle in the suspension which changes the damping and preload, depending on your speed, acceleration, throttle position, braking forces, and lean angle, and it does this in milliseconds.
You can also get into the system via dash settings to personally tailor the base parameters of the DDC. It does sound very technical, and it is, but once shown how the system works it’s easy enough to navigate.

As with the standard S 1000 RR there are four riding modes: Rain, Sport, Race, Slick. On the S 1000 RR Rain mode reduces outright power as well as bottom and mid range, but on the HP4 each mode has full power, but in Rain it is softer down low. There’s lots to adjust if you wish, but as you select each different riding mode the suspension characteristics are automatically adjusted to suit that style of riding (the base settings are also adjustable to suit different rider weights, preferences etc).
It’s more involved than BMW’s ESA found on other BMW models. Imagine riding along a bumpy road, you might be in Rain mode, with softer suspension settings, the road turns to smooth corners, you go to Sport mode while still on the move, now the suspension is a bit firmer, and still adjusts automatically to the various inputs. In Slick mode the race spec ABS uses settings perfected in the German IDM Superbike Championship.

The Race ABS IDM setting is calibrated for racing to provide more aggressive braking with less intervention, so the front tyre can actually lock slightly before ABS will react, this allows ‘A’ grade riders to push harder and deeper into corners than they normally would, feeling less intervention from the HP4’s ABS. While you can’t adjust the ABS you can the DTC. There’s 15 settings in all including zero, and you can select up to +7 or -7. Some of the more adventurous riders on the launch were sampling way down the minus settings but we stayed around the zero mark or above during our track sessions. 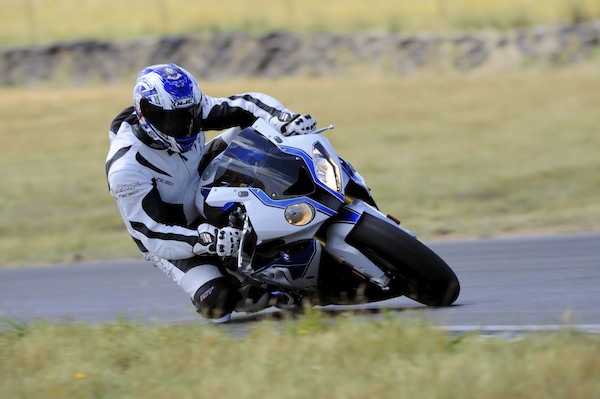 Normally we would not relish the thought of heading into heavy traffic on a sportsbike but the HP4 was relatively easy to live with in this type of riding. We just love the quick-shifter which comes standard, it works beautifully, even if you are just plodding along.
Once outside the confines of the city we were in either Rain or Sport modes and could not help but be impressed with the way the HP4 soaked up the road conditions. It’s no GS of course, but it wasn’t a pain to ride. At one stage we were on a bumpy back road heading to a mountain pass, and the HP4 coped amazingly well, with no hint of a snatchy throttle, or any pilot launching antics from big bumps.

We covered around 300 kilometres on the road trip, swapping between the S 1000 RR with regular suspension, and the HP4 with the DDC. Comparing both bikes as to their road handling abilities, the HP4 was definitely better on the rougher roads. If on totally smooth surfaces the choice would be harder to define. Both bikes have awesome brakes, essentially the same power, and handle well. But we got off the bikes at the end of the day thinking we would rather have spent the whole day on the HP4.
The S 1000 RR is a fantastic bike, but the HP4 is a better one.

One word described the HP4 on the track. Wow! This bike is way faster than we can ride it but it has so much to offer the regular track day punter, if that’s why you are buying it. In all track sessions we tried either Sport, Race or Slick mode, and towards the end just had it in slick. This allowed us to play with the DTC settings just to see how they worked and we can say it’s perhaps the best we’ve ever sampled on the track. It doesn’t feel very intrusive but you can see the light on the dash flash when it is doing its job.
We think the secret to getting the best out of it is getting your head around trusting it. If pulling the odd wheelstand or two is your go simply put it in Slick mode and go for it.

Heading up Wakefield Park’s hill we were constantly pulling power stands, with only a couple nearly getting ugly when we were a bit throttle happy. Geez this bike has some mumbo. It’s hard to say exactly how much better the HP4’s brakes are compared to the regular S 1000 RR, they are both great on the track, offering loads of initial bite and power.
We couldn’t really tell the difference, maybe faster riders can.
We think it’s similar to the DTC, maybe you just need to learn to trust the bike rather than go on what your experience with other machines tell you.

Maybe the HP4 redefines those limits?
As you went from Sport through to Slick mode you could tell the change in the way the bike handled and steered, especially the steering. In Slick the suspension firms up and slightly changes the geometry slightly, enough to stop the bike from running oh so slightly wide exiting corners. Launch Control is another feature on the HP4. The name pretty much says it all, but it allows the rider to get better race starts, simple as that.

With the throttle held wide open it limits rpm to around 9,000 and deactivates wheelie control so you can loft the front wheel when nailing a good start (DTC can sometimes reduce power when it senses and extended wheelie, therefore hindering the perfect start. There is still an art to getting the clutch out in a way to get maximum drive and not too much wheelie, but its much easier when the rpm is limited (you don’t need 193hp to get the bike moving from the line!) This can only be done in Slick mode, and you only get three goes in quick succession before the system shuts you out of Launch Control to save the clutch until it cools down.

The HP4 definitely has the edge over the S 1000 RR on the road, and it also has it on the track, although maybe not so clear cut. Let’s face it, most riders would be more than happy blasting around the track on an S 1000 RR but the HP4 takes it to the next level, and what a level that is. And all this for only $27,990 + ORC. 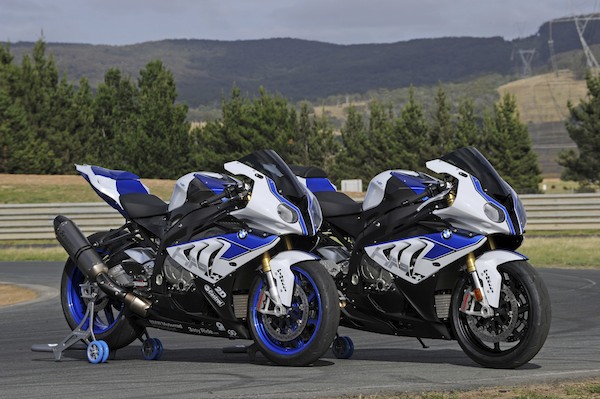 That is a lot of bike for the money. And if the HP4 isn’t enough BMW has a competition package available for it, which includes rear sets, carbon bits, different coloured wheels and different stickers, and trick hinged brake and clutch levers. This costs an extra $4,460.
The trouble is getting one.
The first shipment of the HP4 has been pre-sold and the next one expected later this year.