THE world’s favourite adventure bike has been updated for 2013, adding water-cooling for the first time on a Boxer BMW engine and a list of conprehensive changes all aimed at making the bike better at the wide varierty of tasks owners make them do. 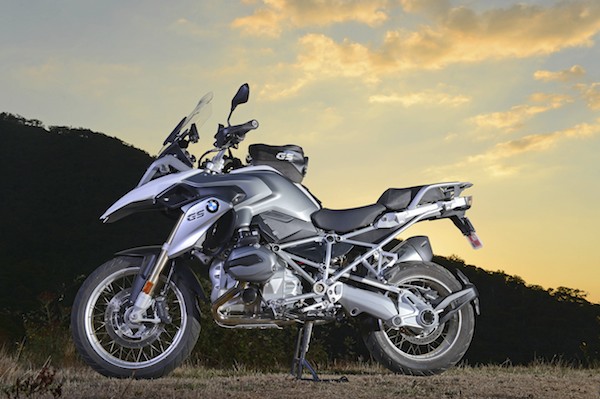 One of the most versatile machines ever built, the R 1200 GS is equally at home blasting down a winding mountain road, scrambling for traction on a fire trail or carrying two people and luggage along a freeway.

Fully updated
The Wasser (you guessed it, German for water) cooling is really just the headline change for the GS, the biggest update but by no means the only one.

The engine
To take the GS to the next level of performance, water cooling was needed – maintaining the required levels of reliability, noise and longevity demanded moving away from the old oil/air cooled system, although not entirely.
The water provides only about 35 per cent of the engine’s required cooling, the rest coming from airflow across the cylinders.

Does this mean you could limp home with a holed radiator should you be unlucky enough to cop a stone in the wrong place? Not officially, but if the weather was cool, the distance not too far and you kept speeds low, it would be an interesting experiment… but don’t send my the bill if it doesn’t work out, your BMW warranty won’t cover you riding with an empty radiator.

“BMW doesn’t offer guards as an accessory,” BMW’s Miles Davis told Cycle Torque. “But Australia has some fairly unique conditions and our GS riders take their bike into some pretty inhospitable places, so some radiator protection might be a good idea.”

The bike actually has twin radiators and they are mounted fairly high and out of the way. The engine itself certainly uses the older powerplant as inspiration for the new design, but it is a new development. 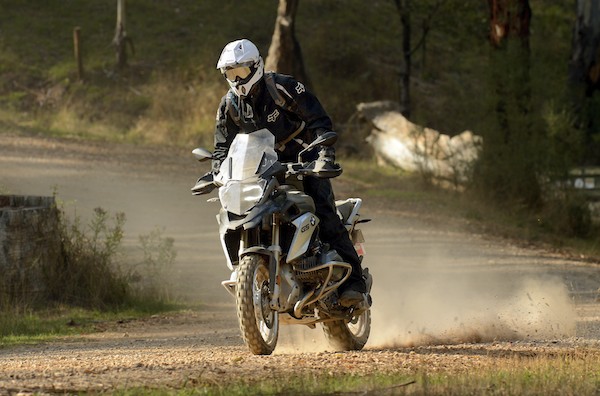 The injection system is vertical, the fuel travelling down into the cylinder before passing down again and exiting as burnt gases, in contrast to its horizontal travel in the past.
Having the injection system up high means the airbox is higher and so are the air intake ducts, making the new GS a little harder to drown during creek crossings than older models.

It’s still a four valve per cylinder motor with double overhead cams displacing 1170cc – stats identical to the older bike, but it produces more power, now 125hp at 7700rpm. 125NM of torque is available at 6700rpm.

The engine has been significantly redesigned. The vertical intake means the chain drive to the camshafts can be made simpler because there’s no injection system getting in the way, the cams are now dedicated inlet and exhaust (they were hybrid cams on earlier DOHC models) so more aggressive profiles can be used, while the redesigned cylinder head allows for much shorter valve springs.

The net result is a more efficient combustion chamber, allowing for an increase in compression ratio by half a point to 12.5:1.

There’s also a new crankshaft and counterbalance shaft. What’s significant here is this bike produces the power and torque to absolutely destroy off road and dual purpose tyres with ease, can spin a rear tyre at astounding speeds and has the horsepower to pull incredible wheelies, yet is tractable enough to ride in slippery terrain. Awesome stuff.

The drive
The engine redesign also allowed BMW’s engineers to incorporate the clutch and gearbox into the main engine housing, another first for a Boxer. Not only does this save space and weight, it has allowed the use of a wet, multiplate clutch (and BMW was smart enough to fit a slipper clutch).

The design transformation continued through the transmission to the point where the final drive has switched from the right to the left. The updates are night and day.
The lighter, easier to use clutch, a transmission which is sweeter and easier to use and the slipper action to reduce hopping when making aggressive downshifts into corners and generally being a larrikin means this GS set-up is a making all other BMW twins look old.

The bike
At first glance the new GS doesn’t look that much different to the old one. Then you start to realise how much more aggressive and purposeful the styling is… and when a 2012 model is parked nearby, well, the old bike looks remarkably pedestrian.

The “waist” of the bike is slimmer, so it’s easier to grip with the knees when standing, although the test bikes were fitted with the awful standard two-row footpegs – flick them for the triple-row Adventure style pegs at your first opportunity.

The handlebars are adjustable, and there’s a myriad set of options for the seat height, from a no-cost low or high seat option when you order the bike to the now easier to adjust standard seat.
The rear seat can be adjusted forward and rearward.

The chassis has been tweaked and adjusted, modified and improved. Where the previous model used a front frame for the Telelever suspension and a rear frame for the swingarm pivot and welded-on rear section, the new bike has a continuous steel bridge frame.
The subframe is now bolt-on, and even the pillion pegs can be easily removed to reduce weight.

The front fairing/instrument carrier is magnesium. To improve handling, cope better with the increased horsepower and improve steering, BMW has fitted the new GS with wider wheels and wider, lower profile tyres.
Both wheels are half and inch wider. The front tyre is a 120/70 R19 compared to the old 110/80-19, while the rear has grown from a 150/70 R17 to a 170/60 R17. 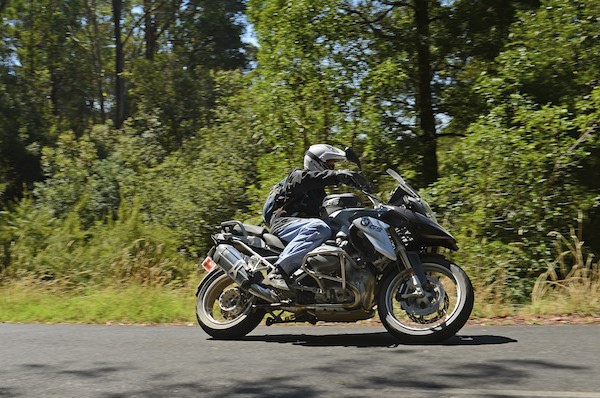 On the bitumen
Road riders looking for a machine which is very comfortable for tall people could do a lot worse than the R 1200 GS, for its combination of riding position and bodywork make it a great all-day machine: roomy, protective and now, with the optional cruise control, you can even give the right wrist a rest from time to time.

The wider wheels and tyres, combined with the updated suspension, offer more confidence-inspiring riding, especially when hustling along a winding road.

The road riding modes are Rain, Road and Dynamic. The first provides gentle throttle response without compromising total power or torque output, while the Automatic Stability Control (traction) is at its most active, preventing wheelspin as much as it can. Electronic Supension Adjustment, if fitted, will be soft and supple.

In Road mode, the system presumes dry roads, providing a linear throttle response and easy riding, and standard suspension settings on the ESA.

Then there’s Dynamic. Let lose the horses! With the most direct throttle response, restrained ASC intervention and stiffening of the ESA, this is the mode to catch your friends if you’ve given them a head start. They just might need it.

As a road bike, the R 1200 GS is excellent. The riding position is fantastic up to licence-losing speeds, the ABS brakes pull it up remarkably well, the handling from the Telelever front end/Parlever rear is very good.
Add in the long suspension travel and you’ve got a package which can cope admirably with any road surface from racetrack smooth to, well, utter crap, and still maintain high speeds. 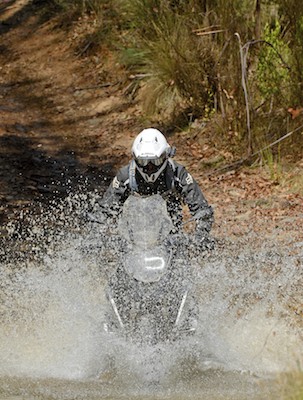 Radar traps are few and far between when the blacktop ends though, and for many riders that’s where the fun begins.
A confident, competent rider can eat kilometres in an incredible fashion off road on a GS, and the latest technologies make it easier.

The dirt road modes are Enduro and Enduro Pro. The latter is for experienced riders only, and BMW recommends it only be engaged when off-road tyres are fitted to the bike.
To do so you’ll have to install the plug clipped into the rider’s seat, then set it to Enduro Pro. In Enduro mode the throttle response is soft, the ASC is restrained, ABS isn’t as intrusive and the ESA comfortable.

I didn’t mind Enduro mode, but I was frustrated by the way the ASC would cut power across the corrugations in the road surface created by trucks.

Moving to Enduro Pro the problem went away without having to take the further measure of switching off the ASC. Enduro Pro also switches off the ABS to the rear wheel, and sets the suspension firmer via ESA. I loved Enduro Pro.
The feel of the power delivery, the drive… awesome. You can still switch off the ABS and traction control if you wish.

Versatility
Australia’s warm climate means most of us can ride year-round, and the GS, with its surprisingly protective easily-adjusted screen, hand guards and heated grips makes four-season riding not just doable, but fun.

This model matches or exceeds earlier versions’ ability to take heaps of luggage on the big tour, although nothing was said about a large-tank Adventure model, which in the past has appeared a year or so after the initial release of a new GS, so maybe we will see that in 2014.

I also didn’t get the chance to try out the LED lights at night, but they are certainly highly visible during the day to other road users.

The technology in the dashboard is pretty amazing – there’s a host of information available at the touch of a button or two. 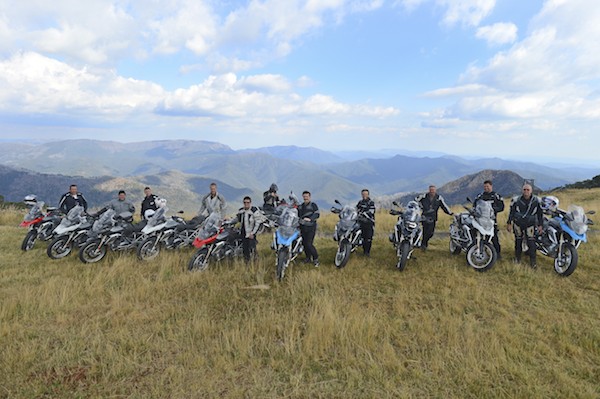 Those getting dirty will want the Spoked Wheels ($580), tourers the cruise control ($500) and the paranoid the alarm ($505).
If your arse is a bit low to the ground you can get the no-cost lower seat but if that’s not enough you can get the low suspension option for $250, but to get this you must have the Dynamic Package.

That pretty-well takes care of the options – things which must be on the bike when you buy it are difficult or impossible to retro fit later. At any time you can buy a heap of accessories, including luggage (panniers, tank bags, soft bags), GPS Navigation, Akrapovic muffler… the list is long.

Conclusion
I love Adventure bikes, and the 2013 model R 1200 GS just went to the top of my ‘most wanted’ list. With improvements in almost every area, little change to the pricing and the ability to take you almost anywhere you want to go, the new BMW R 1200 GS is a gem.

BMW’s new water cooled R 1200 GS is our feature test of the May issue and we also ride the Husqvarna TR650’s, Yamaha’s updated FJR1300 and the KTM 500EXC and 350 EXC-F, continue our tour of Cambodia and review heaps of riding gear andequipment. […]

ANDY Strapz has developed new pannier frames to allow owners to use his Expedition Pannierz on the new 2013 BMW R 1200 GS. […]