Here’s a bike which does almost everything – it ticks all the boxes from being capable of getting down a single track trail if need be, droning down a freeway on the cruise control, blasting along a winding mountain road or doing the machine’s forte, adventure touring.

After two days of riding the new machine, I’m happy to declare it the best big-bore GS ever. Early models might have been lighter, Adventure versions had greater range… but overall, this bike, with its increased horsepower, advanced electronics, electronic suspension and incredible versatility is simply one of the best bikes ever built.

Day 1 was primarily road riding, Day 2 was primarily dirt – overnight BMW’s team of leprechauns had swithed the standard Tourance rubber for knobbys, specially airfreighted in for the launch, because this is the first bike to take the new, wider rubber – and with the bike not available to the public until April, a launch in March could have been left without suitable rubber.

The other reason for the change of tyres was BMW’s rules: without ‘enduro’ tyres, we wern’t allowed to fit the chip to enable Endruo Pro mode, the most hard-core off-road setting available on the new bike (short of turning off the ABS and traction control). And after sampling both Enduro and Enduro Pro modes, I can really understand why BMW Australia wanted the journos in Enduro Pro – it’s heaps of fun and excellent for experienced riders. 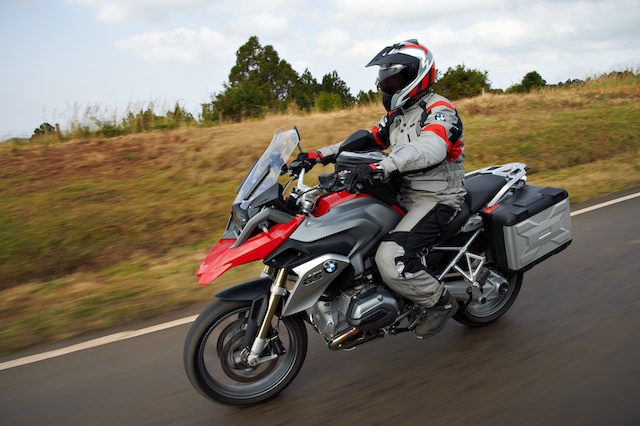 Enduro Pro enables one feature I’ve wanted since the introduction of ABS to the GS: the ability to switch the ABS off at the rear, but leave it active on the front. After all, this is no 100kg MX machine, and keeping a GS upright if you lock the front is a task only suitable for great riders. Locking the rear, however, is a way to steer the machine, as well as offering control over loose, choppy terrain.

When it comes to the traction control (ASC in BMW speak), Enduro mode allows the rear wheel to spin up a little, which is a great feature, but I was finding the lose of drive over choppy corrugations very frustrating. Switching to Enduro Pro allows a lot more wheelspin before the traction control kicks in, basically solving my problems there. a locked up rear wheel going into slow corners certainly doesn’t faze me, but I was happy to have a safety net at the front.

The other big feature of Enduro Pro is a more direct throttle response, so the bike would drive harder as the throttle is opened. Again, this is something experienced adventure bike riders will love, but it could be intimidating for the less experienced, so Enduro Mode is a better place for riders new to a GS should start.

Certainly don’t listen to crusty oldies who insist you should turn off the ABS and traction control when riding the bike off the bitumen – try it out for yourself.

There’s mountains more to talk about in the full test of the 2013 BMW R 1200 GS – watch this space for a longer, more complete launch report and videos – we’ve got some great footage from onboard and of river crossings and more.

Sykes on pole at Aragon WSBK