FAST road riding, a little bit of dusty dirt and a whole lot of fun was had sampling BMW’s new R 1200 GS.

This is a very important model for BMW, updating it’s best-selling bike in Australia and setting the base for the model for the next few years, at least. The changes to this machine will mean it won’t get another comprehensive update for some time, possibly a number of years.

The styling is more aggressive. The GS range hasn’t ever been very conservative and it took riders a long time to warm to the styling of the outgoing GS models, but this latest one takes the strong enduro styling a step further. 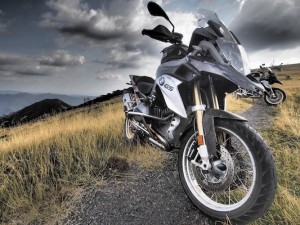 The snout nose is sharper, the lines more purposeful, the appearance more powerful.

Up top the screen is more angular, and easier to adjust too, with a single simple knob easily within reach from the rider’s seat, making adjustment all the easier.

The new instruments are easier to read, the electronic suspension, traction control and ABS adjustments all easier to get to and set – there’s even standards-approved indicator (push to cancel) switch.The big changes in the engine include a wet multi plate clutch, which is a delight to use. About all that remains of the motor are the bore and stroke measurements, everything else appears to be new. Even the basic design of the fuel flow is different – instead of fuel being entering the cylinder head from near the rider’s foot, it’s now injected from the top, so the exhaust now bolts onto the bottom of the cylinder, before turning forward and looping back to the catalytic converter, exhaust valve and massive, ugly muffler.

The Akrapovic optional muffer look much better in the pictures, at least.

For the rider the seat height is now more easily adjusted and between the optional lower seat and suspension lowering kit, the range of seat nights available, and therefore the ability of the bike to cope with a wider range of riders, has expanded.

In standard trim the bike is supplied with alloy wheels, but all the machines on the launch had the $580 optional extra laced rims fitted.

During today’s ride it was primarily road, although the small amount of dirt-road riding we did showed the bike to be more than competent in the dust, even with the standard tyres. On the bitumen the bike is amazingly fast for something many riders erroneously consider to be a dirt bike (although interestingly, many dirt bike guys can’t believe anyone would want to ride such a heavy machine away from the bitumen).

The 2013 R 1200 GS is the best GS ever on the road, the updates to this model helping it carve through the turns and blast between the corners better than ever, in surprising comfort.

The long-travel suspension doesn’t care about the quality of the road surface anywhere near as much as a road bike, soaking up the punishment and powering on. The 2013 model impresses in part because of it’s wider tyres, but also because of the enhanced electronics package.

Tomorrow we spend more time off-road than on, on knobbier tyres. BMW says its ABS and traction control is much improved off-road, and I liked the old systems, so I’m looking forward to it.

The interesting thing is you would expect the HP4 to be even sharper and harder edged than the ‘cooking’ S 1000 RR, but BMW has not only made it a better track bike, it’s made it a better road bike too. […]