BMW launched its new F 800 GS Adventure to journalists with a rock-music backed video showing the bike off as a performance all-rounder, with impressive dirt action and on-road speed, using a mix of solo and two-up shots. 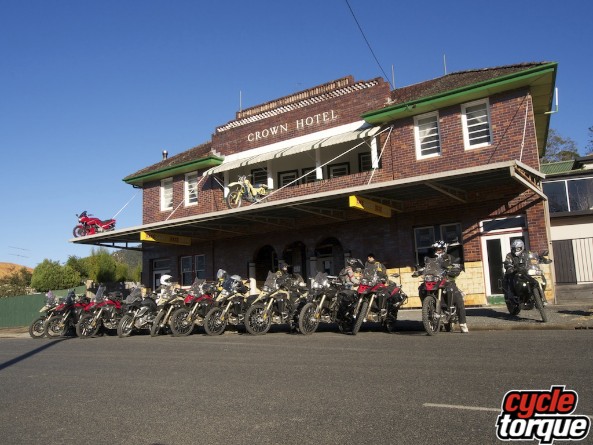 Got the feeling there’s a video director out there who wants you to believe the new GSA is a long-range motocross machine with a dual seat and panniers. Thankfully, it’s not.

It is a lot of things, but primarily it’s a long-range tourer capable of going places few bikes can. A lighter tourer BMW has long made Adventure Tourers – larger fuel tanks, alloy panniers, enhanced crash and weather protection… and until now they have all been based on the large flat-twin power plants, so every GS Adventure has been a big, heavy motorcycle. Fine if you don’t mind that – but limiting in some ways. And expensive, too.

The F 800 GS Adventure tries to address some of those issues. It’s a touch over two grand more money than a standard 800 GS, and by the time you’ve added a few options and accessories you won’t be getting any change out of $20K: however, that’s the best part of $10,000 cheaper than a similarly-equipped 1200 GS.

Not only is it lighter on the wallet, it’s also much lighter on the scales, too, the bike just 229kg ready to ride, about 30kg lighter than the 1200 GS Adventure.

The underseat tank is 8 litres larger than the standard model and the subframe reinforced to cope, the fairing screen is much larger and there are standard hand guards. BMW’s Comfort Seat is standard on the GSA, although there’s a plethora of options when it comes to seats to suit different height riders.

The seat certainly is comfortable – two long day rides may have resulted in a few sore muscles but my butt felt properly pampered – but off-road I’d prefer a flatter seat which is easier to move around on.

Talking of comfort, I loved the larger, more protective screen and handguards. Tall enough to block the cold from your chest but not so high to ever interfere with my view or cause buffeting, the screen is awesome.
Similarly, the handguards block the wind from your hands and combined with the standard heated grips means you should never have cold hands and would rarely need thick gloves. 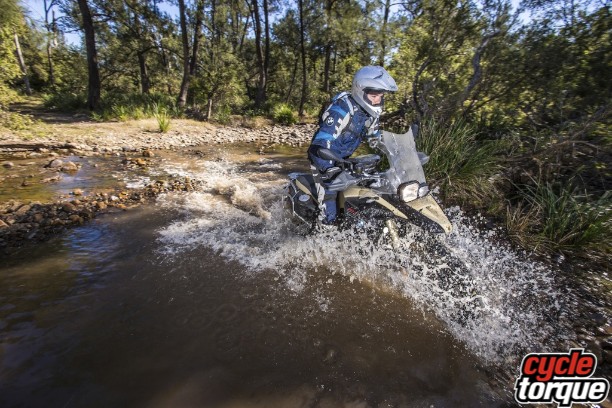 LED indicators and auxiliary lights are standard. Crash protection is also enhanced on the GSA, with guards around the motor and a plastic bash plate standard – for the launch BMW fitted all the bikes with the optional heavy-duty bash plate.

A non-standard accessory also fitted to the test bikes was a Touratech headlight protector, because so many bikes in a group is a recipe for rocks being thrown. BMW Australia had switched out the standard plastic bash plate for the optional $383 alloy unit.

The Adventure also gains ABS standard, while BMW’s traction control (Automatic Stability Control) and ESA (Electronic Suspension Adjustment) are options. A new option is Enduro Mode. At the press of a button, a rider can switch from road-going ASC and ABS to dirt-oriented setting which provides more slip in the loose stuff – so you’ll slide more out of corners and get less intrusion from the ABS system.

The larger fuel tank takes the bike from being close to 300km before the big push to as much as 500km. Fuel consumption on the F 800 motors can vary widely, with some riders reporting over 20km/l but ride hard off road and that could nearly halve.

Either way, the 16 litre tank on the standard GS was a bit of problem for many potential owners, because the range through Australia’s outback just wasn’t good enough, and because the tank sits under the seat, it wasn’t an easy problem to solve. Increasing the fuel capacity has resulted in bulges at the back, but you can lean on them while standing, which is pretty comfortable.

Another positive change is the adoption of triple-row footpegs, which are much more comfortable to stand on than the double-row type on the standard GS. 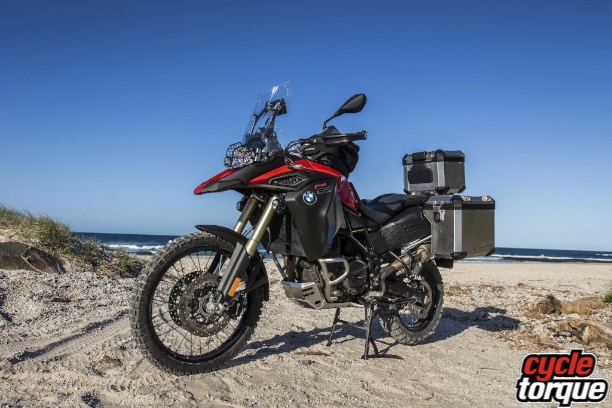 The brake pedal also has the flip-down height extension like the one on the 1200 GS Adventure. I never found riding on the standard GS as comfortable as I thought it should have been; it was always a stand-out disappointment with the bike. The GSA’s triple row pegs have fixed that, and I’d recommend to anyone with a GS to get a wider set of pegs.

The GSA is equipped out of the factory with knobbier tyres, from a couple of different manufacturers. Carrying the load BMW’s Adventure machines have always been able to carry a big load, and the F 800 GS Adventure is no different.

The bike’s standard equipment includes pannier racks (which double as crash protection bars for the underseat fuel tank) and a rear rack. The company offers alloy panniers and a top box, in addition to an optional tankbag.

The tankbag is expandable, has a map/phone pocket, weather flap and fits on snuggly – although at one stage I didn’t have it tight enough and I managed to bump it forward, into the key fob, which turned off the ignition while riding. A trap for newbies and tightening the straps fixed the problem. The tankbag can be leaned on while standing and doesn’t get in the way unless you really fill it up.

The panniers form-fit around the expanded tail section of the bike. They feature locks and seals to keep moisture out and look great. A pair of cases with set you back $1592, which I though was pretty reasonable, but I think the top case at $1016 is a few hundred more than it really should be.

The tankbag is $340 and two sports bag soft luggage options are priced at $230 and $267 respectively. 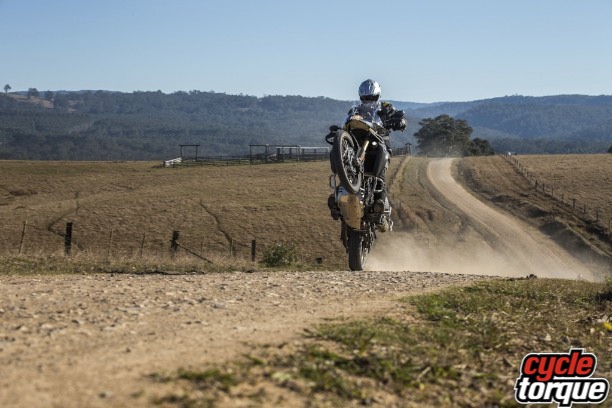 Performance
85 horsepower (63kW) and 83Nm is never going to pull the arms out of your sockets on the bitumen, but there’s more than enough performance here for off-road touring. It’s actually more than the old R 1100 GS produced, in a much lighter, more compact package.

On the road the bike is awesome – it’s quick enough around town, cruises effortlessly at highway speeds and can accelerate you to licence-losing velocities pretty easily, too – but it’s not as comfortable and it won’t get you there as quickly as the open-class adventure bikes.

Off road it could well be a different story. The reduced weight and easier handling of the 800 could well make you quicker along a firetrail than you’d be on a bigger bike. I found it to be less effort to ride, too, which means reduced fatigue.

If you’re wondering if the 800GSA has enough performance for you, I’d say it’s only two-up riders with full panniers and a few elite riders who like tearing up expensive knobbies which really need the extra performance – but that’s not to say you don’t want the performance. I love big, heavy, powerful machines, even when I’m not exploring their full potential.

Chris Vermeulen was the special guest at the launch of the GS Adventure, and he owns an F 800 GS – and if a MotoGP winner doesn’t need open-class performance, do you? 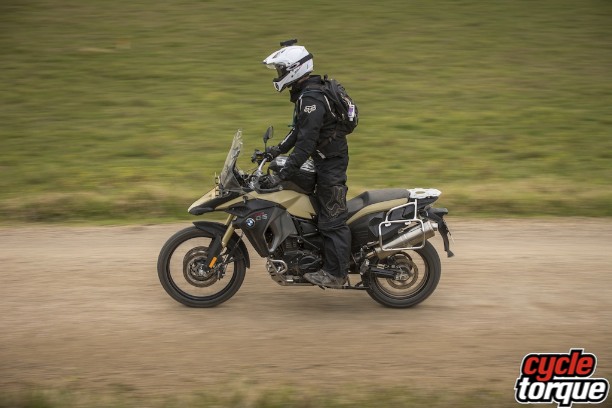 Enduro Mode works with the ABS and ASC to delivery increased slippage before the electronics kick in – in road mode the engine performance is reduced if both wheels aren’t spinning at the same speed, so no wheelies or rear wheel slides. In enduro mode, some variation is allowed, so you can powerslide through turns and the system only tries to correct if it’s getting out of hand.

I was surprised to hear ex-flat track champ Vermeulen liked the Enduro Mode (I’d presumed he’d switch it all off while off-road) but then I realised he’d spent years racing bikes with traction control, and was happy to smash the throttle and let the electronics help.

Enduro Mode also reduces the propensity for the ABS to kick in – it doesn’t switch ABS off at the rear like the 1200’s Enduro Pro mode, but it does reduce the ferocity of the ABS kicking in.

The ESA only adjusts rear suspension damping, across comfort, standard and sport – I did like switching the ESA to comfort off-road and back to standard or sport on the bitumen.

The ASC and ABS can be switched off completely, but you have to remember to do so each time you switch on the iginition. 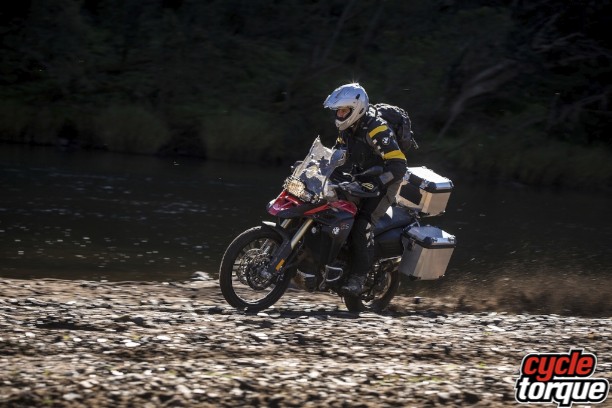 Suspension and ride
The BMW F 800 GS Adventure is an awesome all-round adventure tourer. It’s got the load carrying, off-road handling, road bike comfort and even scratching ability which makes it one of the most versatile motorcycles ever built.

The handling – that elusive combination of suspension performance, steering, brake feel and feedback – combine nicely to inspire confidence in the machine. I found myself having an absolute ball, sliding it out of gravel turns and pitching it hard into bitumen bends. 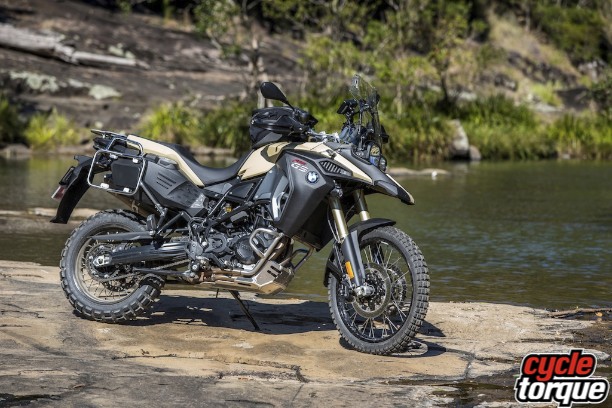 Pricing and specifications
BMW provided fully-specced bikes to the media for the launch, and that’s certainly a great way to have them equipped – if you can afford it.

The base price is $18,550, $2060 more than the standard GS – that would be a no-brainer for me, the expanded range and triple-row footpegs alone would be worth the extra money.

I’d definitely add the Enduro Package ($580), but I’m not sure I’d go for the ESA – at $580 it’s not cheap and as it only adjusts the damping at the rear… maybe I’d go for it if I was rolling the purchase into a finance package, I’m not sure.

From the accessories side, I’d probably go with the alloy panniers, a sport bag and the tankbag. I might have skipped the tankbag and opted for my Kriega bum bag, but with the power outlet next to the ignition, running power into the tankbag for phones, GPS etc is so easy it’s not funny.