BMW motorcycles is synonymous with motorcycle touring. It’s been that way for many many years. Of course you can tour on a Postie bike if you want, but historically plenty of touring riders rode Beemers. And for good reason too, as it’s only in relatively recent times the German manufacturer has been noted for bikes with sporting aspirations in their DNA.

BMW Australia runs two ‘Safaris’ a year, the GS Safari which caters for the adventure set, and the Touren Sport Safari for riders on BMW road machines.

That needs to be clarified a little. You won’t see a BMW road bike on the GS Safari (well I didn’t on the last one I did) because there are substantial amounts of dirt road, but on the road based Touren Sport Safari you will see a number of GS models, mainly because they are a fantastic touring machine, on tar or dirt. 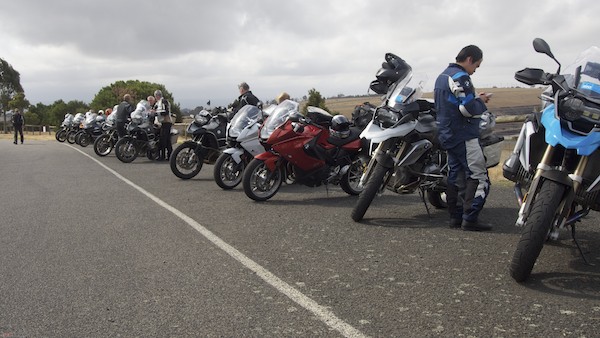 The 2013 event ran from Sunday, February 17 through to Friday, February 22. As you would expect, the route is changed year to year, and for this year the TS Safari kicked off in Warnambool in Victoria, around the end of the famed Great Ocean Road, winding its way along the coastline to end up in Healesville, another very beautiful part of Victoria.

I joined the event at Lorne at the end of Day Two, with a three day adventure ahead of me. Many of the TS Safari participants are regulars, and the age varies greatly, from lady riders in their early 20s to Octogenarians still out there enjoying life to the full. I arrived in Lorne – itself a very pretty place on the Victorian coast, an hour or so down the GOR from Geelong – just in time for the briefing for the next day’s ride.

It’s a low key affair, with most riders enjoying a cool drink and getting the good or bad on what to expect on the next day’s ride. This could be bad news if you include weather forecasts.

My ride during the TS Safari was BMW’s new F 800 GT, and so after a few hours doing a photo shoot it was off down the GOR and up into the hinterland behind to sample the bike and the roads. The last time I actually rode the GOR was 20 years ago but I don’t remember it being substantially different to what it is now.

At certain times of the year the road is apparently overrun with tourists and Grey Nomads towing caravans, and this can slow your progress down somewhat, as overtaking opportunities are very limited.

Due to the photo shoot we (me and partner in crime Ralph Leavsey-Moase from AMCN) were unable to complete the entire day’s route so we got to Skenes Creek not far from Apollo Bay where we turned right and rode up and over this glorious road which at times was so narrow it should have been one way, coming out at Beech Forrest where lunch was had at an amazing little coffee shop.

Josh Brookes (Milwaukee Yamaha) was denied the pole position at Knockhill today ahead of the fourth round of the MCE Insurance British Superbike Championship by just 0.004 seconds as Brookes lines up second on the grid for the opening race. […]