The QBE Australian Superbike Championship event to be held at Sydney Motorsport Park on August 1-4 will incorporate a very special series with Australia’s premier road race championship hosting  a round of the MRRDA National Junior Road Race Championship.

There will be approximately 20 junior riders aged 12 to 16 set to showcase their skills across the weekend. Pictured above is MRRDA ambassador Chris Vermulen and MRRDA founder Paul Edwards with the 2013 competitors.

This is the first time the junior class will have ever raced at Sydney Motorsport Park. Paul Edwards, founder and Chairman of the MRRDA acknowledged this was a ground breaking move for motorcycle racing in Australia.

“It is great to finally have the juniors back racing in NSW and to run with the Australian Superbike Championship provides great for exposure for both parties,” Edwards said. 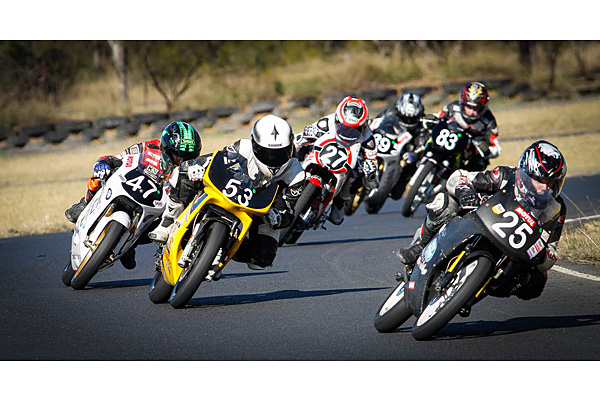 “Teams will get the chance to see first hand, the talent that is coming up through the ranks and our junior riders will have the chance to see what options are available as they progress their racing careers. “

“As part of their weekend at the Australian Superbike Championship the junior riders will spend time with Team Honda Racing Principal Paul Fee, who will talk to them about bike set-up and the importance of feedback,” he explained.

Round 4 and 5 of QBE Australian Superbike Championship will incorporate the fifth round of the MRRDA National Junior Road Race Championship, which will see riders contest three races across the weekend.

“We are very proud to have the MRRDA National Junior Road Race Championship running alongside the QBE Australian Superbike Championship for the first time,” Harper said.

“It is fantastic opportunity for these young riders to showcase their talent to the factory teams, media and a wider audience. This is the first time the juniors have run alongside a national championship in Australia and we hope that we can build on this in the future,” he added.

The MRRDA National Junior Road Race Championship will get their first look at Sydney Motorsport Park on Friday 2nd August during a 20-minute practice session. Saturday will consist of practice, qualifying and Race 1 with a warm up, Race 2 and 3 to be held on Sunday.

The QBE Australian Superbike Championship will welcome some new faces to the grid in 2013 with a host of successful young riders making the step up to Australia’s premier road racing category.
[…]

Yamaha Australia has announced it will continue its one-make YZF-R3 Cup series in 2017. […]

MRRDA juniors to race in NSW

After many years of working with Motorcycling NSW and Motorcycling Australia, the weekend of August 3rd and 4th will finally see the MRRDA Juniors race at Sydney Motorsport Park. […]