Q2 was anything but smooth with rain falling as the clock began its 15-minute countdown. A 1’38.789s put Espargaro 1.405s clear of Marc Marquez in second before the rain came, cementing the Spaniard’s first pole position in 150 GPs.

Aleix Espargaro: “It was a strange qualifying, but that is usual in Assen. At the beginning of the session it was raining and all my team and the Bridgestone guy told me to go quick. But I saw all the other guys going in a bit of chaos. I took a risk and waited 20 seconds. I went alone on the track and I saw 11 riders ahead of me. I pushed and I was a lot faster than them.”

Marc Marquez: “I’m happy with this front row, although we obviously wanted to take pole! The weather was very unpredictable, as sometimes it was raining and then it stopped – meaning that conditions were far from ideal. My goal was to get onto the front row, so when I saw that I was up into second I decided not to take any more risks; there was a lot to lose and not much to gain, so I kept calm because I had already reached my target”

Dani Pedrosa: “It was a difficult session because the track was half-dry, half-wet, and then it started to rain more heavily. We went out with slick tyres and had time to put in a couple of laps, although there was a lot of traffic and we were all close together. It was hard to know how much of a risk we could take. Finally, with the track half-wet, we managed to set a good time and qualify on the front row which I’m happy with. Tomorrow we will continue working on the bike and try to have a good race, which could be either dry or wet.”

Another good effort from Andrea Iannone (Pramac Racing) put him at the front of the second row, where he will be joined by Cal Crutchlow (Ducati Team) – who sneaked through from Q1 and took advantage for fifth despite struggling in free practice.

Movistar Yamaha riders Jorge Lorenzo and Valentino Rossi were quick to leave the pits as the first drops fell but were soon embroiled in a desperate pack of riders attempting to lock down a fast time before the track was too wet. With no clear space for a clean hot lap and grip rapidly disappearing the two returned to the pits with just over five minutes remaining, Lorenzo in ninth with a 1’42.259 and Rossi in 12th with a 1’43.625.

Both returned to the track for a last attempt but the track conditions made it impossible for any improvement.

Alvaro Bautista (GO&FUN Honda Gresini), Pol Espargaro (Monster Yamaha Tech3) and Valentino Rossi (Movistar Yamaha MotoGP) were all four seconds down on the pole time and will therefore all be on the fourth row.

Jorge Lorenzo: “It was a pity because I think with dry conditions we could stay in first row, but it was dry but spitting in some places like normal Assen circumstances. Like this it’s very difficult to go with slicks and understand the limit of the track. You can feel good in two or three corners and suddenly arrive on one corner and it’s wet and you crash. I tried to let some riders run in first position but they didn’t want to so when we arrived in the last corner I decided to push. Maybe it wasn’t the right strategy. It’s a lesson to learn for the future. The pace is good but obviously it’s not going to be easy to overtake the in theory slower riders tomorrow. I hope to pass some people on the first corners and little by little move up. The race is long and if we have a good pace we can fight for the podium.”

Valentino Rossi: “It’s a shame because I was competitive today and in all the practices so I thought I could fight for a good position for tomorrow. Unfortunately we had rain at just the wrong moment and I have to start from the fourth row. This changes a lot and everything will be harder. Jorge is close to me but our competitors are on the front row so it will be hard. On the dry I know I can be competitive, I have a good pace so we have to try the maximum. We improved a lot the stability of the bike for today, so I can push. Especially this afternoon I was really good so I am happy with the pace. We have to wait for tomorrow to see what the conditions are but I hope for a dry race.”

Several riders even switched to wet tyres before the end of the session as the rain got heavier, but fortunately there were no crashes despite the tricky conditions.

Jack Miller (pictured below) will start Saturday’s Iveco Daily TT Assen Moto3 race at the front of the grid, with Alex Marquez and Niklas Ajo also on the front row. 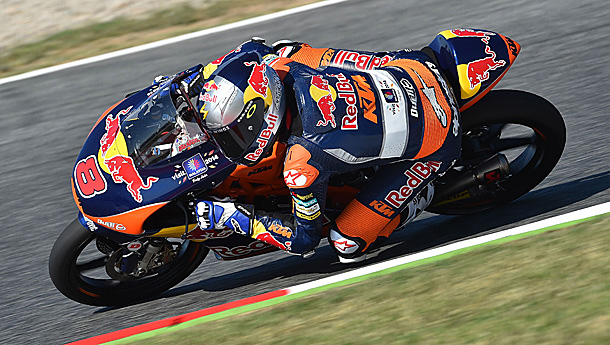 Red Bull KTM Ajo’s Miller responded to the rapid pace of his rivals in practice and QP, producing a new pole record time of 1’42.240 in the final minutes to take pole for the fourth time this year.

Miller will therefore aim to defend his seven point championship lead from the head of the grid on Saturday, ahead of Estrella Galicia 0,0’s Marquez (+0.116) and Avant Tecno Husqvarna Ajo rider Ajo (+190s).

Wildcard Thomas Van Leeuwen and Zulfahmi Khairuddin (Ongetta-AirAsia) both crashed in the session but neither were hurt.