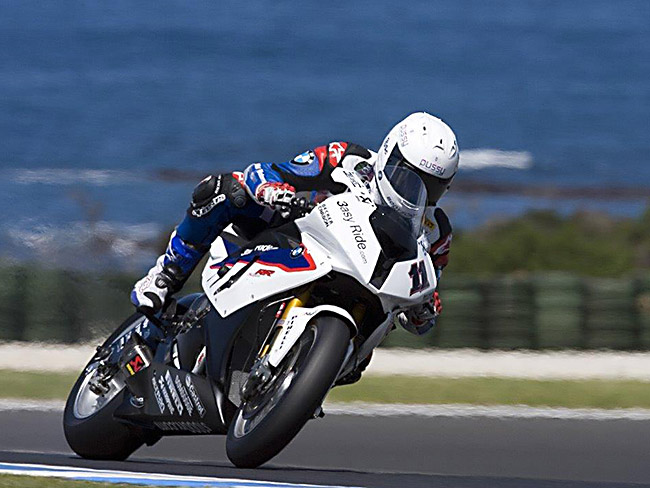 Celebrating its 25th year in 2018, the Island Classic is the largest classic motorcycling event in the southern hemisphere.

Corser will head the Aussie squad in the blue-chip International Challenge teams’ event as the locals look to snap the three-year domination by the Jeremy McWilliams-led United Kingdom.

Teams from New Zealand and America will also compete in 2018.

The UK-based Corser can’t wait to reacquaint himself with one of his favourite pieces of tarmac, where he was a seven-time winner in WorldSBK between 1995 and 2006.

“It’s time to get back and race at home in front of a Phillip Island home crowd.

“It’s been a long time,” Corser said from his UK base, where he lives with wife Sam and two teenage kids, Kalani and Kelisa.

“I have been doing the Goodwood events with a great team at BMW Classic, riding some old museum bikes.

“Everyone tells me the Island Classic is a great event so with it being the 25th anniversary, it feels like a good time to come back and give it a go.”

Corser will ride a 1982 Honda Harris F1 machine in the International Challenge.

He’ll join forces in the Australian team with a number of his 1990s domestic contemporaries such as fellow Aussie superbike champions Shawn Giles and Steve Martin.

Corser has kept a keen interest in the Island Classic from afar, and he finally felt the time was right to throw his hat into the ring.

“Rex Wolfenden is preparing my bike so I’m hoping for a weapon.

“His bikes are always well prepared.

“I’d like to test it prior, but not sure that’s gonna happen.

Corser, a product of Wollongong, carved out a brilliant road racing career. After domestic success in Australia and America, he went on to become one of only six riders to have won multiple WorldSBK titles – Northern Irishman Jonathan Rea has since made it seven.

At his absolute best, Corser was a ruthless practitioner. He could not only produce one-lap flyers in qualifying, but also handle the blowtorch when leading from the front.

His WorldSBK titles came in 1996 and 2005 with Ducati and Suzuki respectively, and he also rode for Aprilia, Yamaha, Foggy Petronas and BMW in the production series.

Corser’s last appearance at Phillip Island was in the 2011 WorldSBK round on the BMW S 1000 RR. Unfortunately, it wasn’t one of his finest outings, at a circuit where he was habitually battling hard at the front and was a long-time lap record holder.

Corser has fond memories of those halcyon Phillip Island days.

“Phillip Island is one of the best circuits in the world and definitely one of my favourites. I’ve had some great races there,” he said.

“The support during my career was always great.

“I am sure some friends and family will come out to watch at the Classic and I’m hoping my old race fans will cheer us on from Corser Hill.”

These days, Corser is a big part of the The Race Academy which runs a series of track-based schools at famous circuits such as Mugello, Valencia, Brno and Catalunya. Corser enjoys passing on the skills and knowledge gained during his stellar racing career.

“I have developed the course at The Race Academy, taught all my fellow instructors, and we offer a complete professional training programme for riders.

“We focus on control and safety, and with that the lap times come. I am very proud of what we achieve,” Corser said.

Troy was inducted into the Australian Motorsport Hall of Fame early in 2017, a great honour marking his achievement and contribution to motorcycle racing both here and internationally.

The International Island Classic will showcase more than 300 riders and 500 bikes and sidecars competing in the three-day extravaganza.

Go to www.islandclassic.com.au for information and tickets.

Cycle Torque TV is back!

The boys are back with Cycle Torque TV – half-hour episodes of bikes, events, news, opinion, racing custom machinery and places to ride. It’s a bike magazine brought to life on your TV, mobile, computer […]